Demand is growing for advanced science classes at Richmond schools — if only administrators could find the money. 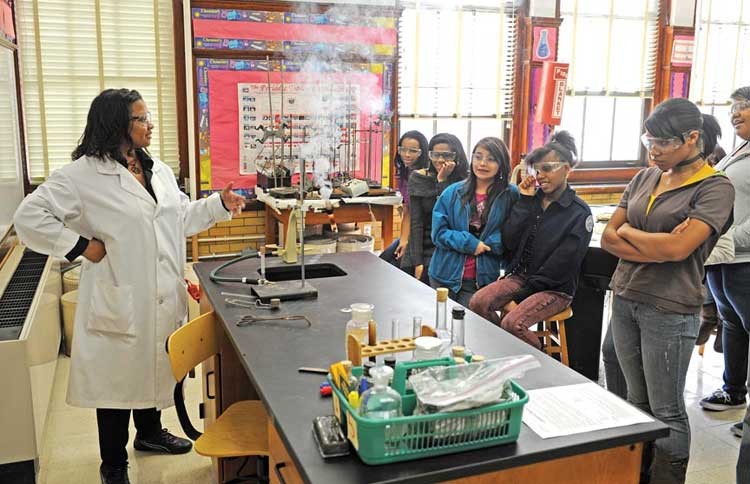 Danica Millner sets the gummy bear on fire. A science teacher at Thomas Jefferson High School, Millner’s been performing some variation of this demonstration on the chemical process of weathering for most of her teaching career.

On this sunny Thursday morning the kids crowd around Millner’s lab table while she inserts the sugary, gelatin bear into a test tube filled with a salt solution, which is being held over a Bunsen burner. The chemical reaction — and those of the jumpier students — is instant: The candy bursts into a white-hot flame.

Only three of the 13 students in the audience, however, are enrolled in Millner’s midday advanced placement chemistry class. The rest are freshman earth-science students who’ve been trucked in to participate in the experiment. “You have to get them interested early,” Millner says. That’s one of the strategies that the Richmond Public Schools are using to grow the number of students taking AP courses.

The school system hopes that students exposed to an enhanced level of instruction will have their intellectual curiosity piqued and sign up for the heavier course load as they become more scholarly. From there, they’ll become more prepared for the rigors of college-level academics. According to numbers produced by city school officials, they’re succeeding.

The enhancement of the district’s advanced placement testing programs has been an agency-wide goal since Superintendent Yvonne W. Brandon’s appointment in 2009. From 2007 to 2010, the number of students who signed up to take at least one AP class for college credit grew from 187 to 760.

But while demand increases, there’s the issue of capacity. As it pertains to the sciences, Richmond doesn’t have enough.

Thomas Jefferson High School is the only city high school in which all four of what administrators call the core science courses — biology, chemistry, physics and earth science — are taught at the advanced level. Most offer only a combination of the four. At Open High School, which is considered one of the better-performing high schools in Richmond, only two advanced science classes are offered.

Offering a dearth of advanced classes has become a necessity for Richmond schools, which compete with the perception among middle-class families with school-age children that the academic grass is greener in Henrico and Chesterfield counties.

“We’re moving to a future where all four core science courses are being taught at all of our high schools,” says Nelson Colbert, the advanced placement dual enrollment coordinator for Richmond schools. So what’s holding the schools back?

So in the ideal scenario, Richmond schools would have the money to not only hire more teachers, but also provide for their training. And money isn’t something the school system has.

Last week school administrators sent the School Board’s $147 million budget request back to Mayor Dwight Jones for consideration. That total includes an additional $23 million to shore up a gaping financial hole without cutting teacher benefits or jobs. And it’s unknown whether they’ll get any financial relief.

Millner says the district nonetheless has made leaps in terms of advanced-placement science instruction. A grant from Virginia Advanced Study Strategies allowed Thomas Jefferson and other Richmond high schools to add capacity.

Before receiving the grant, none of the city’s five high schools had the proper lab equipment required for the full advanced sciences curriculum. With the grant, some were able to add courses.

One example is John Marshall High School. Before receiving a portion of the pool of $13.5 million in state funds, the school offered no advanced science classes. Now students have a choice of three.

Despite the budget woes, enrollment director Colbert says, none of the gains made over the last few years will be rolled back. But there’s also nothing in the budget that will increase the number of courses being offered.

Regarding the recent proposal, Richmond spokeswoman Cletisha Lovelace says that there are no allocations in the budget for adding advanced-placement teachers.

Millner, the science teacher, hopes that will change as the lengthy budgeting process plays out. She sees it as integral to her students’ future success.

“It’s AP classes that are going to get these kids accustomed to the level of academic commitment that’s going to be expected of them at the next level,” she says. “We need to prepare them.”