The Virginia War Memorial expands as a cultural center and living memorial. 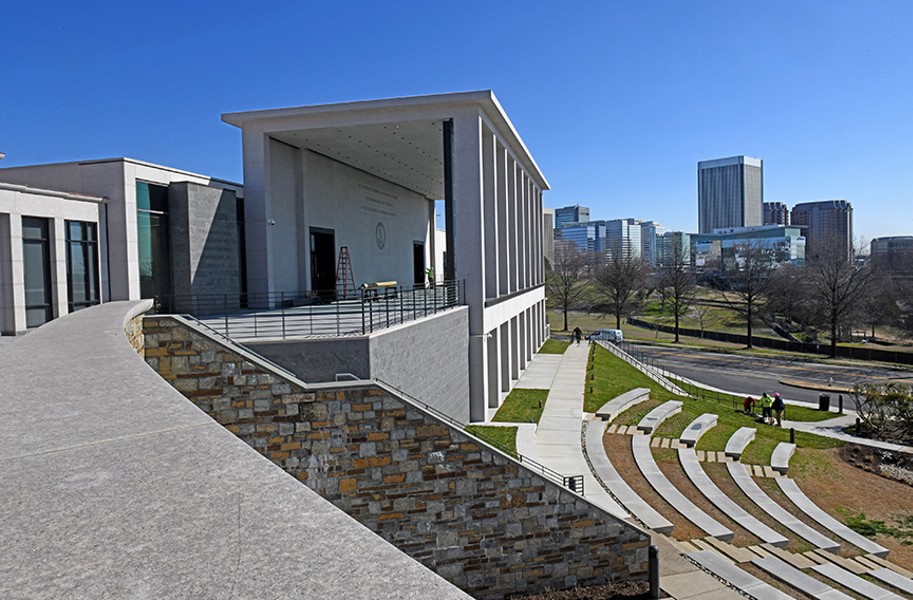 Scott Elmquist On Feb. 29, the Virginia War Memorial will celebrate its 64th anniversary and the grand opening of the C. Kenneth Wright Pavilion and the Shrine of Memory for the Global War on Terrorism and Beyond.

If all you’ve ever done is drive by the Virginia War Memorial on Belvidere near the Lee Bridge, it’s likely you didn’t realize that the walls listing Virginia’s war dead in the Shrine of Memory have been full for years.

Based on the design of Greek temples, the Shrine of Memory houses a 22-foot-tall statue of an allegorical woman in grief with an eternal flame at its base. On the western side, a stone block wall diminishes traffic noise and the glare of the afternoon sun. But it’s on the shrine’s eastern side that a huge sheet of glass lists many of the dead, their names engraved against a backdrop of Richmond.

The memorial was dedicated on Feb. 29, 1956, and this Feb. 29, the community will celebrate its 64th anniversary and the grand opening of the C. Kenneth Wright Pavilion and the Shrine of Memory for the Global War on Terrorism and Beyond. Work began in 2016 to double the memorial’s space, including adding programming and event space with parking on two underground levels and a surface lot.

“This is part of our effort to help the public see the Virginia War Memorial as a living memorial, but also to become a cultural center for Virginians,” explains its director, Clay Mountcastle. “The memorial is about culture, service and patriotism.” Admission is always free.

The Wright Pavilion houses new gallery space to showcase rotating exhibitions, including traveling exhibits, twice a year. Using the memorial’s photographic archives spanning the Civil War to the Global War on Terrorism, the inaugural exhibition, “Military Photography: an Added Dimension” has an interesting twist. All of the photos were printed in 3-D format, so visitors will have to don 3-D glasses to get the full effect. One wall displays stereoscopic cards, because, Mountcastle says, “it’s a way for grandparents to show their grandkids how their generation did 3-D when they were young.”

What staffers call a magic box will showcase rare pieces from the collection that the public isn’t permitted to touch. First on display will be a logbook from dropping the atomic bomb on Hiroshima. Visitors will be able to remotely turn the pages of the book to inspect it through the glass. Magic box displays are expected to be a focal point for school groups and education programs.

There’s a Virginia Medal of Honor gallery dedicated to Virginians who received the citation from the Civil War to the Vietnam War. Nearby, an interactive display allows visitors to see biographies of all Virginia recipients by searching either by war or serviceman’s name. The history of the medal, as well as an explanation of what it meant, completes the exhibit.

The Shrine of Memory expansion means that those soldiers whose names had been going on a list could finally be engraved on the new glass wall overlooking the James River. The list begins with Virginians killed in Beirut in 1982 and currently stops with the death of Staff Sgt. Ian McLaughlin of Newport News, who died in Afghanistan on Jan. 11 when his vehicle was hit by a roadfside bomb.

Also new is a Distance Learning Center that allows interviews with veterans to be broadcast online to classrooms across the country. A research library houses the myriad items — letters, diaries, artifacts — that families have been donating to the Virginia War Memorial since the end of World War II. With the help of an archivist, those materials will be made accessible to the public.

Seeing such things is eye-opening. During the Second World War, servicemen were permitted to mail coconuts home simply by writing the recipient’s address on the side of the shell, as seen in the collection. In early February, a man donated a Nazi flag that had been captured in Germany by his father’s tank unit. The flag was subsequently signed by all the men in the unit, along with their hometowns.

“That’s the kind of very interesting stuff we have come in,” Mountcastle says, acknowledging that it will be the curator’s job to determine how the flag can be used as part of an exhibition. “Everything we accept has to have strong ties to Virginia or we say ‘No, thanks.’”

Another space is devoted to a Veterans’ Art Gallery, a place to show and sell their work.

“I’ve met so many veterans who are also artists, but it’s interesting, they identify as artists who happened to serve their country,” Mountcastle says. “This gallery will allow visitors to see veterans in a different light.” The opening reception for the Veterans’ Art Gallery is March 5 from 6 to 8 p.m. and features the work of Mike Fay, Diana de Avila, Pamela Corwin, Bernie Donato, Dennis Hicks and Saxon Martinez.

In past years, the memorial has averaged about 50,000 visitors a year, a number it expects will double with the expansion. Come summer, it will hold a concert series outside in its amphitheater focusing on military-themed music and bands.

“We started as a shrine and a statue and many people have never stopped to look in,” Mountcastle says. “Between being a cultural center, a living memorial and all our programming, our biggest challenge is letting people know everything we do.”