Four British children escape one war, only to find another. 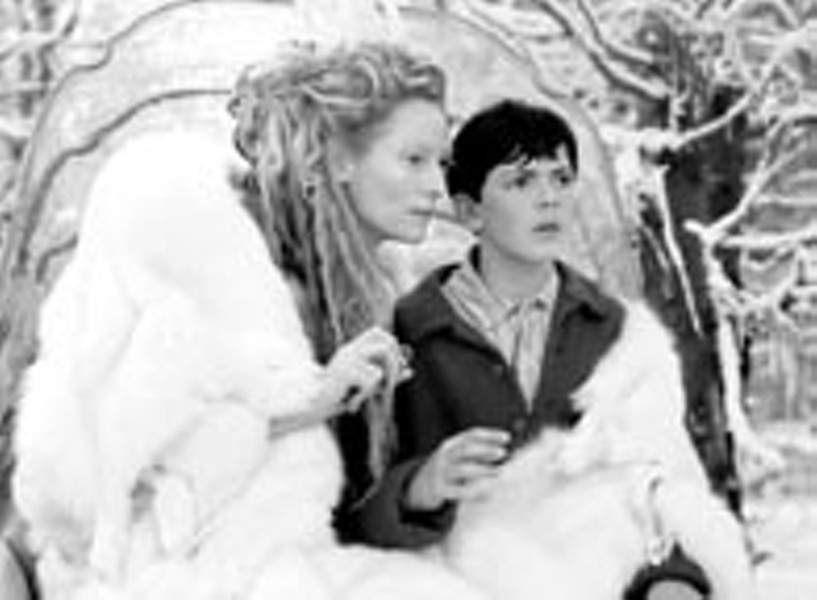 It's not surprising, then, that Andrew Adamson's new film of the first and best-known volume, "The Lion, the Witch, and the Wardrobe," doesn't have the epic heft or tragic undertones of Peter Jackson's Tolkien trilogy. It's hardly supposed to. The national drinks of Narnia are tea and cocoa, not mead. But these less-stout brews are served up with enough literate charm and technical skill to please not only the youngsters for whom the film is chiefly intended, but also their minders.

The film begins, rather startlingly, in "Band of Brothers" mode, with the Luftwaffe pouring down destruction on London in the Battle of Britain. On the receiving end are the four Pevensie children, who after a narrow escape, are evacuated to the countryside and billeted at the grand rural estate of an eccentric professor (Jim Broadbent). Our wonderment at the ability of a scholar to afford such digs is quickly dispelled when another marvel appears: an antique armoire that doubles as a portal to the snowbound kingdom of Narnia.

Once inside, the Pevensies, ranging in age from about 8 to 15, find themselves in a world with no less conflict than the one they were fleeing. The land is in thrall to the malevolent White Witch (played with terrifying coldness by Tilda Swinton). She is usurper to the throne of Aslan (voiced by Liam Neeson), the Christ-like lion whose legions are massing to the north, but from whom a terrible sacrifice will be demanded to ensure ultimate victory.

The chief narrative strength of the movie may be the way it only very gradually reveals the gravity of the brooding conflict. When the youngest Pevensie, Lucy (Georgie Henley), becomes the first to discover Narnia, she meets only a befuddled faun (James McAvoy), thoroughly English down to his umbrella and brown paper packages tied up with string. By playing to our now apparently insatiable appetite for the quaintly British, the film primes us to expect nothing more sinister than a stale piece of seedcake or a leaky thatched roof. It's therefore all the more unsettling when we discover that there are torture chambers in this snowy paradise, and packs of wolves that patrol it with Gestapo-like rigor.

The wolves, of course, come courtesy of the digital graphics department at Disney, who also supply a pair of talking beavers that guide the children through Narnia, along with packs of centaurs, assorted big cats, and almost the whole of the White Witch's army, composed mostly of monstrously distorted figures who seem to be on loan from the paintings of Hieronymus Bosch and Matthias Gr�newald. Although the beavers, in particular, constantly wisecrack in a way that seems discordantly contemporary, they and their digitally generated peers are sufficiently realistic to share the screen with the live actors.

As the film builds toward the final battle and the tone darkens, things onscreen get more intense than many viewers might expect, given the film's PG rating. There's never much blood, but there is much running-through with lances and many jarring shots of the front lines coming violently together in a general outbreak of mauling, thrusting and groaning. And of course, as Lewis' Christian allegory demands, Aslan's ordeal, including his ritualized humiliation and execution, may be as harrowing for young viewers as "The Passion of the Christ" was for their elders; the sacrificial victim, after all, in this case looks a lot like the family kitty waiting back at home.

Sunce the War on Terror began, a good deal of effort has been made to assure non-Christians that Christianity neither condones the demonization of their beliefs, nor seeks to eradicate their cultures. It must be said that "The Chronicles of Narnia: The Lion, the Witch, and the Wardrobe" is out of step with this mollifying enterprise. Approvingly evoking the trappings of the crusades, it is marked by a peculiarly English celebration of the Church Militant. That noted, it's also a ripping yarn. (PG) 140 min. **** S