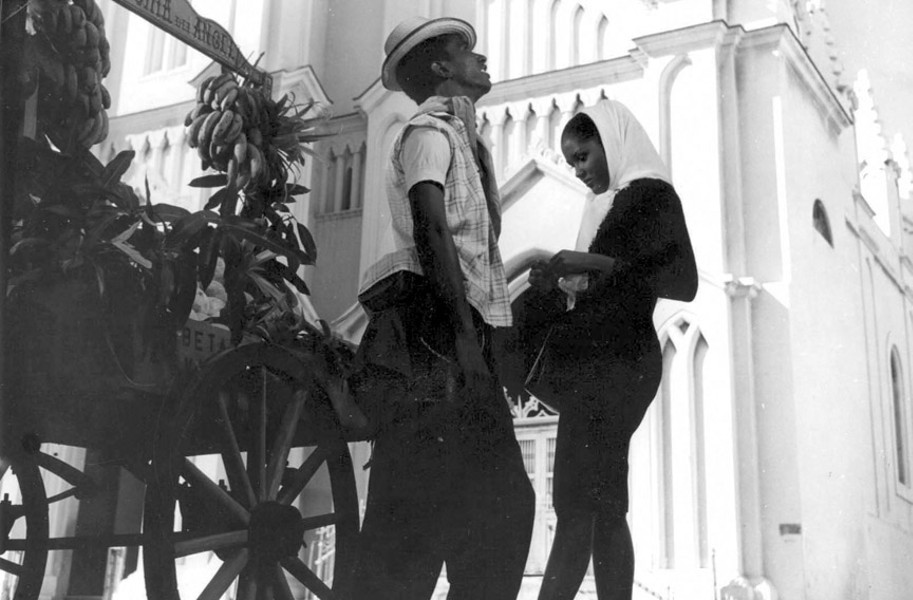 A still from the hugely influential and utterly gorgeous 1964 film, “I Am Cuba,” directed by Mikhail Kalatozov and praised by the likes of Martin Scorsese and Paul Thomas Anderson.

Mainstream cinema depends on invisible craftsmanship that directs audiences' attention to matters of performance and narrative, which is how most people like it.

Cinephiles, on the other hand, seek films that deconstruct themselves, laying bare the artifices of the art form so as to unearth social and aesthetic insights. Released in 1964, Mikhail Kalatozov's "I Am Cuba" is a legend in cinephile circles, serving as a bible for countless masterpieces that followed in its wake.

"I Am Cuba" was to be a "Battleship Potemkin"-like document of a revolution, concerning the unrest that led to the overthrow of the corrupt and U.S.-backed Cuban president, Fulgencio Batista. Cuba's next leader, Fidel Castro, gave Kalatozov notes, advising that he shoot in Sierra Maestra, the mountain range where Castro regrouped at a pivotal juncture in the revolution and where the film's fiery climax would eventually be set. Che Guevara also advised on the film's script — a collaboration between Enrique Pineda Barnet and Evgeniy Evtushnenko, Cuban and Soviet poets, respectively.

Financed by both Soviet and Cuban money, "I Am Cuba" is a celebration of the potential of the Communist machine, and of the implicit correlation between the Soviets and the Cubans as peoples casting off the shackles of American meddling. Needless to say, this assertion has not aged well, and Kalatozov often makes his political points with the grace and subtlety of a shotgun wedding. The characters are all symbols — pawns in a scheme. It's inconceivable for Kalatozov to imagine that a poor Cuban farmer might be anything other than poignantly humble and desperate, or that a police officer under Batista's regime might show a human quality other than piggish, cowardly venality.

Yet "I Am Cuba" has an all-encompassing obsessiveness that transcends its propaganda, serving as formalist cocaine for cinephiles and art aficionados. The film is a work of genius that's tinged with insanity, suggesting a free-floating cinema that has been untethered from the narrative strictures of plays and novels. Free-associatively moving from one character to another, Kalatozov manages to evoke multiple forms of consciousness, suggesting multiple divides, as well as inseparable allegiances, between the personal and the political of Cuban life. The identities of the characters are bluntly rendered, but their emotional oscillations are dramatized with an audacious aesthetic that suggests a missing link between docu-drama and opera.

There isn't a single ordinary shot in "I Am Cuba," which creates a tension that's detectable even by a casual viewer. Kalatozov's compositions are often framed vertically rather than horizontally, illustrating how buildings and mountains loom over characters and casually dwarf them. A fishbowl effect complements the verticality, seemingly thickening the images, lending them the intense materiality of wood carvings.

There are also tracking shots of astonishing and sensual virtuosity, which suggest explosions of the lurid pyrotechnics of Orson Welles's "Touch of Evil." Most famously, a camera glides along a party on a rooftop, gradually crawling down the building to another party by a pool, eventually following swimmers into the water. Paul Thomas Anderson mimicked this sequence in "Boogie Nights," and the rock-star fluidity of "Goodfellas" also seems unimaginable without it. Martin Scorsese, along with Francis Ford Coppola, were pivotal to restoring "I Am Cuba" for American audiences.

Less famous, but equally impressive, are sequences set in a bamboo bar and on a high-rise, respectively, in which unbroken camera movements dramatize internal battles of will. Maria (Luz María Collazo) is a poor and beautiful young woman who sells herself to loutish American men, and Kalatozov films her as such men thrash her back and forth between them, her body and agency, becoming lost in bamboo that suggests prison bars. On a high-rise, a young revolutionary debates killing an enemy, pacing corridors that come to physicalize his doubts. When this revolutionary is later killed, Kalatozov has him fall out of a vertical fishbowl frame, seemingly collapsing in our laps. The frame blurs, suggesting the loss of life as well as the melding of a singular consciousness into the collective of the revolution.

"I Am Cuba" is freighted with an irony: Its amazing construction feels Russian rather than Cuban, for which the film was commonly criticized during its initial release. And Kalatozov's fetishism of poverty as an expressionist freak show can be crass and exhausting. Considering that the film runs 141 minutes, it would be refreshing, perhaps, if a few scenes weren't twice as long as they needed to be. But these are quibbles. Excess is the true subject of "I Am Cuba," which survives as an evocative document of passion that — pity for revolutions — often proves impossible to sustain. S

A rare 35 mm print of "I Am Cuba" will be playing at the Byrd Theatre for free on Sunday, April 15, co-sponsored by VCUarts Cinema and Bijou Film Center. 1 p.m - 4 p.m.. An afterparty next door at the New York Deli with Motel X will follow.