Wes Anderson captures a return to form in the whimsical "Moonrise Kingdom." 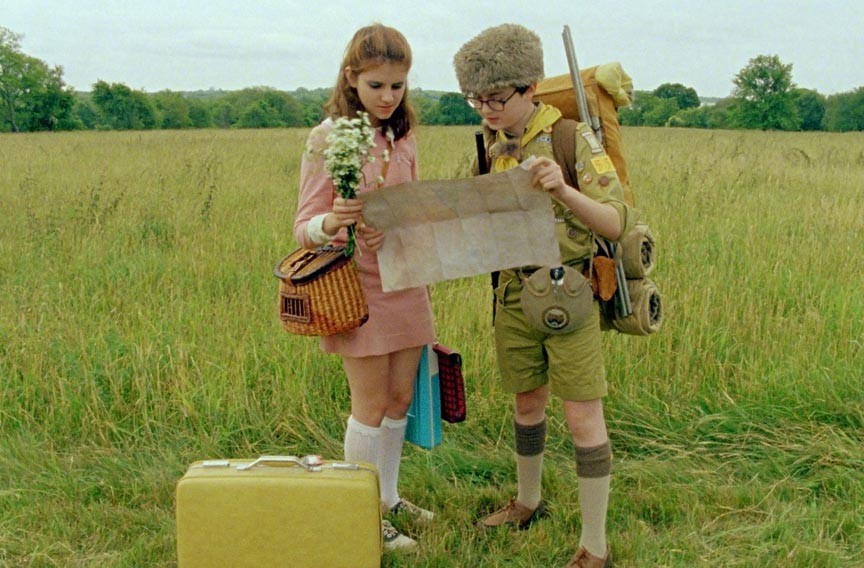 Fans of Wes Anderson won't be surprised that the director's latest film contains certain qualities, including quirky characters, retro kitsch, dry humor, film referencing if you care to spot it and an eclectic soundtrack — all stirred into a whimsical porridge of a feel-good movie.

The director's last live-action effort, "The Darjeeling Limited," arguably over-indulged in these signature traits, to the point of self-indulgence. "Moonrise Kingdom" shows not just better writing, but also self-restraint, to tell a more compact story of two kids who get fed up with their lives and decide to run away together — wait for the joke — on a tiny island.

Typical to the director's style, the action takes place in a much more vibrantly colored, studiously analogue realm than our own — a New England island in 1965. There, an extremely punctilious Khaki-Scout master, Ward (Edward Norton), awakens one morning to discover that his perennially picked-on scout, Sam (Jared Gilman), has escaped "Shawshank Redemption"-style, through a hole in his tent. Sam has run off with a local girl, Suzy (Kara Hayward), whom he met the previous summer. Together, the 12-year-olds evade capture by a search party determined to bring them back, using, mostly pointlessly but always humorously, the survival skills Sam learned as a scout.

The story jumps back and forth between these two groups, the second featuring scoutmaster Ward, island constable Capt. Sharp (Bruce Willis), and Suzy's parents, Walt and Laura Bishop (Bill Murray and Frances McDormand), all assisted by the rest of the young but determined Khaki scouts. Like Steve Zissou in "The Life Aquatic," everyone takes themselves way too seriously, against the backdrop of a sparsely populated, obscure place filled with antiquated technology. The only way to the island is a bumpy ride in a single-engine plane, much to the unease of "social services," the dour and otherwise unnamed woman (Tilda Swinton) on her way to take Sam to an orphanage.

With several films of varying qualities to examine, Anderson's style has become iconic. Some might argue rigid. Some others might argue tiresome. Those in all categories might acknowledge that "Darjeeling" had additional problems. In that film, star actors postured all over India, but really got nowhere past a few modest gags and strained, esoteric messages.

"Moonrise Kingdom" concentrates on two kids on two specks of land and is leaner, less ponderous and a lot funnier. It's also more emotionally affecting, equaling if not exceeding the emotional involvement in the director's previous work, including "Rushmore." Sam and Suzy's eighth-grade love affair is daringly realistic for an American film, with psychological depth that Anderson and co-writer Roman Coppola accentuate through the often equally believable roles of the adults trying to rein in the kids. Though a constant deluge of droll irony follows the young couple's sojourn, there also are some tender moments of young love, or at least heavy like.

Sam and Suzy's predicament also is adorned with a dash of pathos, undercut of course by the ironic whimsy that Anderson likes to plaster over his scenes. Flashbacks to Sam's foster-home experiences are full of tongue-in-cheek "This Boy's Life" moments, which are more humorous than sad. But there's a sweet sadness in the poor boy's almost complete lack of friendship. Nobody likes him, except Suzy. Though her own family reminds you partly of "The Royal Tenenbaums" and partly of the cutaway scenes in Steve Zissou's submarine in "Life Aquatic," Suzy is Sam's inverse. While he has nothing, she's a girl who has everything but the most important things, which are love and attention.

None of this means anyone will start confusing Wes Anderson with P.T. Anderson any time soon. "Moonrise Kingdom," like most of Wes Anderson's work, thrives on comical set pieces and barrages of hip non sequiturs. It gets off to a slow start in its first five minutes or so, and there are other minor problems. Anderson might have considered switching the Bruce Willis and Bill Murray roles. Willis' island cop is passable; but Murray, such a tower of potential when it comes to dry humor, seems wasted, or at least underemployed, as a whiney cuckold. Regardless, "Moonrise Kingdom" mostly is a return to form, a comic drama heavy on the comedy and much lighter on the drama — no surprise for an Anderson film. You won't escape this island without being subjected to plenty of quirk, retro charm and whimsy. (PG-13) 94 min. S