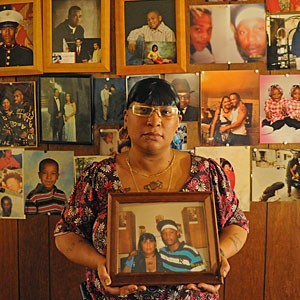 In the wee hours of the morning, Alex Arrington Jr. would often burst through the front door of the north Richmond home he shared with his mother just to kiss her goodnight. Sometimes when he was out, he'd call his mother on his cell phone, rousing her from sleep, just to talk.

At 25, he was still a “mama's boy,” says his mother, Lillian Wilson. “He would call me up and ask ‘How are you, my lovely mother?'” Arrington, nicknamed “Lil' Alec” for his somewhat short stature, was a charmer, a smoothie, she says. That's was why she was never able break her “social butterfly” son of his late-night habit. “He knew he could talk fast enough to keep from getting cussed out,” she says.

In the early hours of Jan. 1, after Arrington had left for the night, Wilson did receive a phone call, but not the one she was expecting. Arrington, dressed in clothes purchased for the occasion, had taken a bus to the Hillside Court public housing complex to celebrate New Year's Eve.

His sister, Tachell Arrington, remembers exchanging text messages with him at around 9:30 that evening. He was visiting a girl. “I told him Happy New Year's Eve, and that I loved him,” she says. “He texted me back, saying ‘I love you too, sis.'”

Hours later, police found Arrington lying in the street with multiple gunshot wounds. Coraliss Logan, also 25, was discovered just a block away inside her car with a gunshot wound to her chest. Both were pronounced dead at the scene, the first two of four homicides so far this year in the city.

On Jan. 20, Richmond police arrested Ivan “Slap” Smith of south Richmond in connection with the two murders. Investigators have not yet said whether the two shootings are related. Arrington's mother, Wilson, says that the family was unfamiliar with Logan. But she suggests that Smith and her son were friends.

“They were out together earlier that day,” she says, sitting inside her living room, surrounded by members of Arrington's extended family. “I just want to know if he did do it, why he would shoot somebody he knows and leave them in the street like a dog?”

For Wilson, the pain is familiar. Among the dozens of glossy photos tacked onto a wall inside her home are pictures of Alex, his father, uncle and god brother. All were lost to violence.

Morris Stith, Wilson's longtime boyfriend, says his Arrington wasn't a violent person. “He was everybody's protector,” Stith says. And if he ever did run into trouble, Arrington was the type to resolve disputes with his fists, not guns, he says.

Arrington dreamed of being a boxer. Even from childhood, he was “good with his hands,” Stith says. But Arrington never pursued it seriously. Stith says it may have been out of deference to his mother, who disapproved of the sport.

Delores Bennett, Arrington's grandmother, says he was an affectionate child who grew into an affectionate man. He was prone to hugging and kissing those he loved, she says. It's a trait his twin 2-year-old daughters, Alexius and Alezaye, share.

And that's how both his mother and sister say they're coping with this latest loss — remembering how after forgetting birthdays he'd show up on their doorsteps with roses, and seeing traces of that sweetness in his children.

“Even when he did something bad, he could still make you smile,” Tachell says. “He was so honest and friendly, you couldn't stay mad.” S