As the holes left by Richmond’s Lost Cause monuments are paved over, a school named for Colonel John B. Cary still carries the legacy.

By Catherine MacDonald and Tom Nash 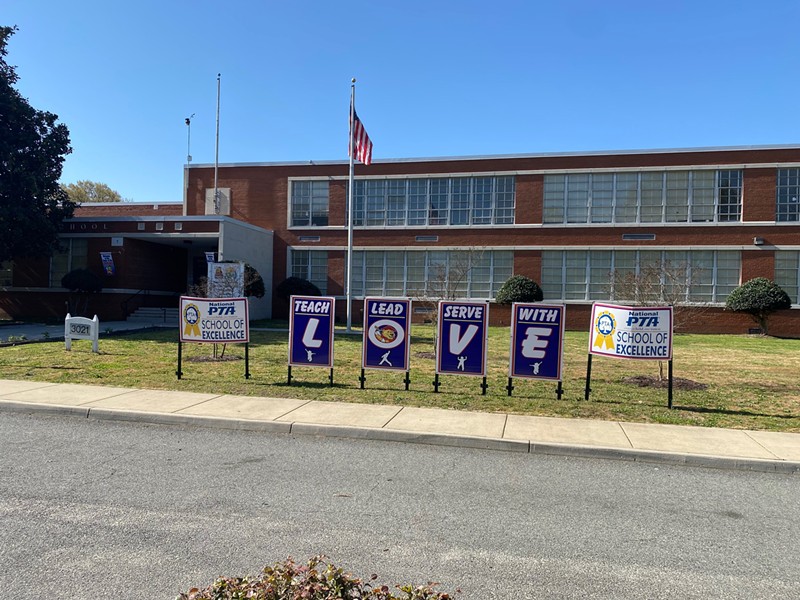 In May 1861, John Baytop Cary was among the first Confederate soldiers to wave a white flag.

He arrived at Union-held Fort Monroe under a flag of truce to demand the return of who he, and his new nation, considered property. The day after Virginia seceded from the Union, three enslaved men named Frank Baker, Shepard Mallory and James Townsend learned that their enslaver had plans to bring them to North Carolina. They sought freedom at Fort Monroe.

Cary expected to return Baker, Mallory and Townsend to slavery.

Tough luck, Major Gen. Ben Butler replied. He told Cary that if an international border now existed between Fort Monroe and the rest of Virginia, the men were “enemy contraband” and years of fugitive slave law precedent did not apply. This became a step toward the Emancipation Proclamation two years later, and is how the fort became known as “Freedom’s Fortress.”

Cary, who had enslaved four people before the war and a “body servant” during the war, appears only in the margins of Civil War history. His work as an educator after the war is ostensibly what earned his name on public schools built in Richmond and his native Hampton.

Last year, Hampton renamed its John B. Cary Elementary School. Advocates cited Cary’s enslavement of African Americans and role in the Confederacy. In Richmond, Confederate general J.E.B. Stuart’s name was removed from a public school in 2018. 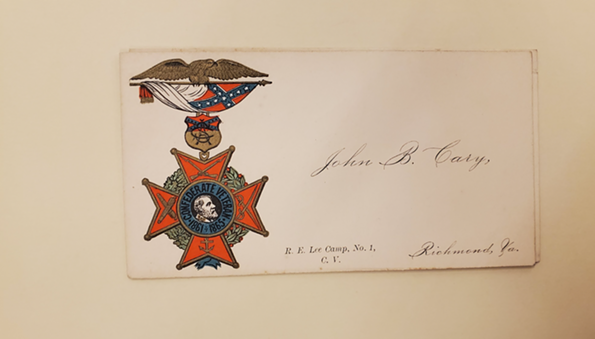 With the last vestiges of the Confederate statues removed from Monument Avenue this month, a colonel whose most noted war action happened under a flag of truce is now the most prominent Confederate symbol remaining in Richmond.

Some have chosen to look past Cary’s background, while others had no idea who he was. Fifth District School Board Representative Stephanie Rizzi, who represents Cary Elementary, fell in the latter camp.

“I’m really kind of blindsided,” Rizzi said upon learning his biography. “It’s a smack out of nowhere.”

While John B. Cary’s role in the Fort Monroe episode can be found easily, other biographical sources are harder to find. Historians John and Ruth Ann Coski wrote what appears to be the most definitive biography of Cary for the Library of Virginia. His role as a founding father of the “Lost Cause” movement is scattered among his collected papers at the Virginia Museum of History and Culture, which itself has origins as a Lost Cause memorial project known as Battle Abbey.

His papers note that by 1862, after having two horses shot from under him, he was appointed to a paymaster job in Richmond. After fleeing Richmond for Appomatox, Cary farmed for a year before getting into the life insurance business. He applied for a Congressional pardon for his role in the war in 1870.

As the politics of Reconstruction tilted toward segregation and violence, he landed political roles aligned with those who wanted Richmond governed as if the South had won the war.

Retired Virginia Commonwealth University professor John Kneebone, who is currently writing a book about the Lost Cause in Richmond, says even taking the role implies some level of interest in educating Black children.

“Among white folks, plenty said, ‘What's the purpose of schools for Black people? Let's eliminate them or cut them down,’” Kneebone says. “Cary became superintendent right after the Readjusters had been defeated.”

A former teacher and principal in Hampton, he was appointed superintendent of Richmond’s public schools in 1886, after previously serving as a penitentiary director and chair of the city’s Democratic committee and on the School Board. It was also around this time that Cary became one of the earliest supporters of the “Lost Cause.”

What began as support for Robert E. Lee Soldiers home, where homeless Confederate veterans were cared for, turned into the beatification of the Confederacy’s racist worldview. Kneebone hazards that Cary’s association with that scene may have helped stave off calls to defund Black schools.

“In some ways, it's possible that his impeccable Lost Cause credentials made it possible for him to fund all the schools,” Kneebone says. “Nobody could accuse him of being a Yankee.”

What was Cary like as a superintendent? Rifling through his papers at the VMHC, one vignette appears in a typed biography as one “he was fond of telling.” A Black student had been sent to him for being “disorderly and disobedient.”

In their biography, Ruth Ann and John Coski cite an 1888 annual schools report in which Cary called for increased spending for Black students "to educate every child, so that he can read his Bible and the Constitution of his country in his mother tongue, and thus fit him for the privileges, the duties and the responsibility of citizenship."

Cary resigned in 1889, citing a need to focus on his business. Appended to this type-written biography is a handwritten copy of a proclamation from the city’s Board of Aldermen offering “the best wishes of the Board accompany Col. Cary into his business life.”

By 1890, Cary found a new focus outside of insurance. Clamor for a monument to former Confederate President Jefferson Davis began immediately after Davis’ death, as outlined by John Coski for the American Civil War Museum. Richmond became the top choice for a monument location after Davis’ widow elected to have his body shipped to Hollywood Cemetery. Davis would be at rest in his nation’s capital as Cary and other committee leaders planned what they called an “everlasting memorial.”

Cary would not live to see the finished work. He died in 1898, two years after the cornerstone was laid for a temple for Davis and what the Richmond Dispatch called “Our Lost Cause” in Monroe Park.

A Richmond Dispatch obituary noted: "Colonel Cary never wavered in his devotion to the Lost Cause, and whenever money was to be raised or work was to be done he was ready to labor, and did labor, tirelessly for the end in view.”

The type-written biography in his VMHC papers concludes: “The character which he has builded is his monument.” 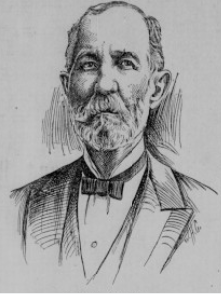 Six years after the final version of the Davis monument rose on Monument Avenue, Cary was honored with his own legacy. In 1913, John B. Cary Elementary opened as one of several schools in the city named after former superintendents.

As the ramifications of Brown v. Board of Education loomed, the city built a new school building for white children in 1954 and took the name with them. Hampton’s John B. Cary opened a few years later, followed by schools named for Davis and Robert E. Lee – all of which have since been renamed.

According to a dormant corner of the Richmond Public Schools’ website, the 1913 building once called Cary educated Black children as The West End School. The newer John B. Cary building was integrated as a “model” in 1969 for a new path forward.

“John B. Cary Model Elementary School once represented the promise of a racially and economically integrated Richmond school system,” Pulitzer Prize-winning Richmond Times Dispatch columnist Michael Paul Williams wrote in 2012, as possible closure loomed. “It was a place where a middle-class kid could find himself flanked by a classmate from Windsor Farms and public housing, to everyone's benefit.”

Williams previously wrote about Cary Elementary’s new status as a Confederate outlier upon J.E.B. Stuart’s renaming in 2018. Two years after the George Floyd protests that toppled Cary’s vision for an everlasting monument to Jefferson Davis, and one year after Hampton renamed their school, Cary’s role in the Confederacy has evaded the same attention here.

Cary Elementary PTA President Timika Vincent did not want to discuss Cary’s role in the Lost Cause, or renaming. She said the conversation arose among parents in 2020, but was shelved.

“This topic alone is divisive and the PTA of John B. Cary has been working hard to bring our communities together,” Vincent said in a message. “We will leave the current and any future naming concerns to the legislators of RPS.”

Fifth District School Board Representative Stephanie Rizzi’s son attended Cary. She was blunt in her assessment upon recently learning about Cary’s biography. No information about Cary is available on the RPS website dedicated to the school.

“When I think of my own son, who attended a school named after someone who called our ancestors property, that’s upsetting to me,” she said, referencing Cary’s attempt to capture Baker, Mallory and Townsend at Fort Monroe. “These schools are also monuments in and of themselves, and the names of them really set the tone for the community and for the children who attend that school.”

Virginia Department of Education enrollment numbers for 2021 show that 114 of 220 students at Cary are Black.

Editor's note: After deadline, RPS Superintendent Jason Kamras responded to a request for an interview with an email saying Cary is one of three schools "we intend to rename next year." Binford Middle School and Ginter Park Elementary School are also on the list, "both of which have Confederate ties."