The Lady and the Dude 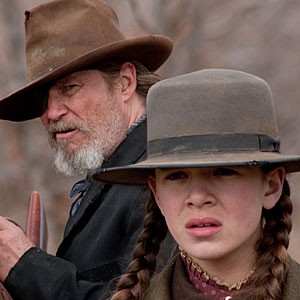 Has anyone ever remade a John Wayne picture before? If doing so isn't sacrilege it's certainly a tall order. While “True Grit” is far from Wayne's best picture, it contains as memorable a character as any he embodied. U.S. Marshal Rooster Cogburn has become another monument in the iconography of Wayne's career, and being one of the last it's as difficult to separate the Duke from the eye-patch wearing Rooster as it is from the roles that the character evolved from, like Ethan Edwards in “The Searchers.”

Joel and Ethan Coen have been quick to note that their version of “True Grit,” with Jeff Bridges in the role of Rooster Cogburn, isn't a remake of the 1969 film but a reimagining of the book. Remakes are a dime a dozen these days anyway, and so many arrive flat-lined — obsequious homage with all the familiar parts but no souls — it's no wonder that the Coens would want to distance themselves from the entire concept. “True Grit” is much more and much better than an obligatory work, however, because the Coens have specialized in retrofitting genre staples for years.

The new “Grit” unfolds much like the first, only this time in Coen fashion. Fourteen-year-old upstart Mattie Ross (Hailee Steinfeld), upon learning of the death of her father at the hands of the outlaw Tom Chaney (Josh Brolin), hires the redoubtable Rooster Cogburn because she hears he's a man with “true grit.” Insisting on going along despite much resistance, Mattie sets out with Rooster on the trail of Chaney, who's taken up with a gang led by Lucky Ned Pepper (Barry Pepper). They're joined by Matt Damon as La Boeuf (pronounced “la beef”), a Texas Ranger whose ceremonious manner greatly enhances the film's comedy.

While this new “True Grit” has a few problems — it seems rushed here and there, for one thing, especially the ending in comparison to the original — they're greatly outnumbered by the movie's qualities. The cast is excellent. The Coens are so good with transforming actors for their purposes that it's difficult to tell who to credit, but those familiar with the Wayne film especially will appreciate the new Mattie. Steinfeld does Mattie's preternaturally self-determined personality without the stultifying bratty air that made Kim Darby's version a little difficult to take. The update is much sharper and comical. You aren't nearly as relieved when she falls into a snake pit.

Damon is equally entertaining as a Dudley Do-Right type lawman who frequently spars with his companions. The town where all three meet is alive with characters in the sense of the word few movies achieve. I began to look forward to encounters with new people, and was rarely disappointed — whether it was a self-educated surgeon wearing a bear skin or Lucky Ned, which would be the comeback performance of the year if Barry Pepper were recognizable. Ned's eyes are so bloodshot and his teeth so rotted he's closer to a corpse than a man.

Bridges as Rooster Cogburn is, of course, the most prominent role, and he doesn't disappoint. Swilling whiskey and boasting at every opportunity, Bridges doesn't aim for a tribute to Wayne but rather seems to be ignoring altogether the inevitable comparison. That's probably the best idea, and what we get is an antique version of the Dude and Bad Blake, more grizzled and portly, which Bridges has transformed into an intimidating “one-eyed fat man,” as both films, based on Charles Portis' 1968 book, put it. Maybe the performance is a little brassy and over the top at first, but by the end it's unforgettable. Nobody can be Wayne, and Bridges smartly pretends like he's doing Rooster for the first time.

The Coens hold all this together with the most resonant and imaginative vision of the Old West since “Deadwood.” The gallows humor in “True Grit,” familiar to the Coens' other work, is given just enough of a postmodern tweak to make it both realistically antiquated and laugh-out-loud funny. Fans of Coen films and Westerns in general should be pleased with this movie, even if the latter find its treatment of the subject slightly weird at times. But they'll also find it true to their sense of the genre, as provided over the years by Ford, Hawks, Eastwood and all their imitators. “True Grit” lives up to its name. (PG-13) 113 min.