Lessons from the Roosevelt presidency, and what President-elect Barack Obama can learn from the populist campaign of Huey P. “Kingfish” Long. 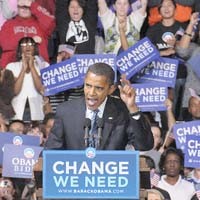 As you read this, president-elect Barack Obama is probably sitting in a hotel room somewhere wondering what the hell he's gotten himself into.

While his formerly “disenfranchised” supporters are cheering loud and long, Obama must know that he's walking into office with the nation's only “good news” being Iraq, and that, of course, is a Bush policy that he ran hard against. When the good news is the situation is improving in Iraq, America's ill-conceived war, president-elect Obama has got to know that he's in “deep do-do,” as a former president once put it.

Newsweek magazine calls this presidential transition, “Nightmare on Pennsylvania Avenue.” The chances are Obama and his staff are finding few positives as they consider the “state of the union.”

Based on the state of our nation, history indicates two scenarios which might come into play over the first term of the Obama administration. I lived through one, but I'm most concerned about the scenario from the era of my grandparents.

I had been an ardent supporter of Al Gore until after 1992 when, in power, he and his boss, Bill Clinton, did absolutely nothing for the environment. We environmentalists had turned our back on the best environmental president in American history, George W.'s dad -- the “deep do-do” guy -- to bring in one of our own, the author of Earth in Balance.

But four years later, that administration had done nothing and we environmentalists were making waves with our restlessness. In a last-minute move in the 1996 election season, the Clinton administration stuck it to Utah by placing 1.9 million acres off limits to any kind of development in the Grand-Staircase Escalante National Monument.

Since Utah was one of the strongest GOP strongholds in the country, the Democratic administration surprised even the state's U.S. senators with the announcement. The Clinton administration wouldn't even make the dedication in Utah, instead declaring the national monument in a hasty ceremony in Arizona, a state still in play as the election neared. It was brilliant politics. We environmentalists again responded with our support and it didn't cost Clinton-Gore a single potential electoral vote.

A few months later, after the election, the rumors began to leak out. Except for what used to be available in the Escalante, Johnny Huang and the Lippo Group controlled the only other untapped deposit of low-sulfur, high-BTU coal deposit in the world. Huang, of course, had been channeling illegal campaign funds into the White House and, by taking Escalante off the market, the Lippo coal in Indonesia skyrocketed in value.

I can imagine something similar happening in 2012 when the people who put Obama in office begin to growl if he hasn't delivered the promised goodies. Already, the Rev. Jesse Jackson has expressed a desire to castrate the man for back-pedaling from the ideas which won him the Democratic nomination.

Worse, I can imagine a scenario similar to the 1930s when populist Huey P. “Kingfish” Long was moving rapidly to unseat Franklin Delano Roosevelt for the Democratic Party nomination. By 1935, citizens, who had turned out in record numbers to put the former New York governor into the White House during a time of 25 percent unemployment, were angry that FDR's policies weren't doing much to solve The Great Depression. The famed 100 days weren't so famous when the dirt poor were calling Long, a former Louisiana governor, and its present senator, the next political messiah.

Behind the “Kingfish” and Father Charles Coughlin, a Detroit priest who first discovered broadcast evangelism, many of the Democratic faithful, and most of the new believers, had turned against the man we now think of as one of the greats. Roosevelt had simply not delivered fast enough for those suffering from the economic meltdown and originally ardent supporters, such as Long and Coughlin, by 1935 were calling Roosevelt a stooge of Wall Street.

Father Coughlin backed Long in his three-hour radio sermons to a congregation of 40 million still down-and-out Americans -- at the time the largest audience in American history. His primary political message: America needs the quasi-socialist agenda revitalizing Germany under a man named Adolf Hitler and the American to deliver it was the one-term senator from Louisiana.

Long fought off corruption, intimidation, vote-buying and bribery charges -- even purchasing his own impeachment vote -- by claiming people criticizing him were actually attacking his supporters, the poor, hard-working dirt farmers. His threat to FDR's reign came to a sudden halt when he assassinated in 1935 just days before Long's book, My First Days in the White House, rolled off the presses.

Obama will enter office in much the same situation that Roosevelt did in 1932. The country will be in crisis, but Obama no longer has the executive power to declare a “bank holiday” and won't have any money for programs like the Works Progress Administration or the Civilian Conservation Corps. None of Obama's campaign promises are likely to come to pass because the country faces a record $10 trillion deficit before any bailout dollars and the Democratic Congress' promise of no new spending until it finds comparable spending cuts.

The financial crises today virtually assures no governmental health insurance, no additional bailouts for people who have faulted on their loans, no nothing after Obama gives the speech of his career Jan. 20.

Will the country wait quietly for policies which always take years, usually decades, to develop?

Will respective interest groups, like environmentalist in 1996, be appeased by campaign shenanigans?

In four years, what will the backers of “hope” and “change you can believe in” still believe?