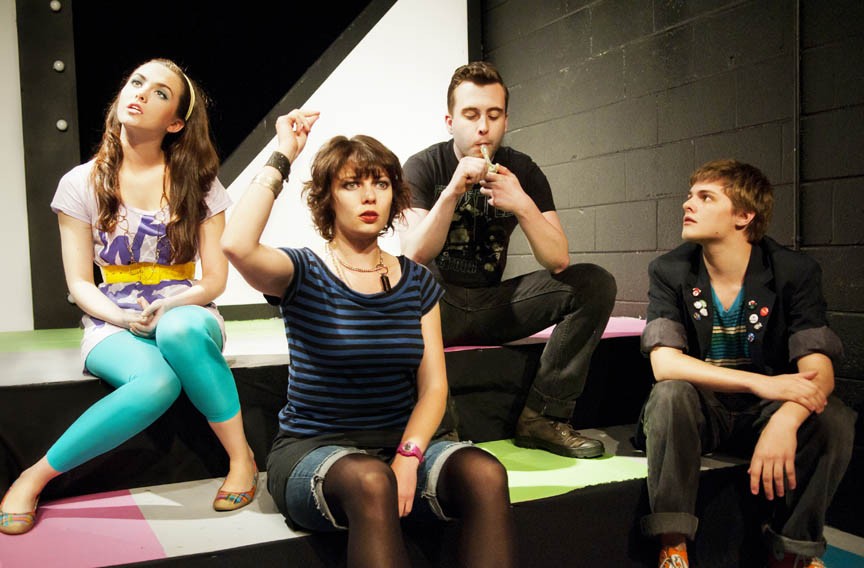 Though set firmly in the 1980s, the Richmond Triangle Players' "Stupid Kids" evokes a timeless high-school dynamic: There are cool kids and there are outcasts, and there's a bright line distinguishing the two crowds. In a series of energetic, expressionistic scenes, the play explores the relationships among four kids who flirt with crossing that line. It's clear from the start that the results likely will be tragic, but what an invigorating trip it is from hope to heartbreak.

Jim (Alexander Gerber) is the rebellious new kid in town who immediately falls for class babe Judy (Courtney McCotter). A night in juvenile hall throws them in cahoots with Neechee (Joe Winters) and Kimberly (Kerry McGee), outsiders who develop same-sexual attractions for their new cool-crowd friends.

Using lyrical dialogue and tribal imagery, the play, written by John C. Russell, aspires to poetry, even having the kids compose and recite poems on stage. When it works, it captures the overwrought passions of high school perfectly. When it doesn't, well, the effort is still pretty valiant.

Director Jason Campbell makes masterful use of music to establish the play's context — snatches of the Violent Femmes, Talking Heads and Joan Jett all are heard. His actors effectively embody classic stereotypes while giving them souls. McCotter gets the most laughs thanks to Judy's "Valley Girl" self-involvement, but also shows an edge of panic at the thought of not being popular. Gerber's hard edge gives way to humility at the end. It takes a while to warm to McGee as the Patti Smith-loving punk, but her skillful navigation of Kimberly's dance of affection with Judy is ultimately the most authentic. Even saddled with a ridiculous name, Winters makes Neechee the most vulnerable, sensitive and conflicted of the four.

The simple set, designed by Philip Milone — large triangles book-ending a mostly bare stage — evokes a variety of locales because of skillful lighting by Becky Brooks. Russell's script makes plain the price paid by the popular kids and, with an it-gets-better-project finale, ends an entertaining evening on a triumphant note. S