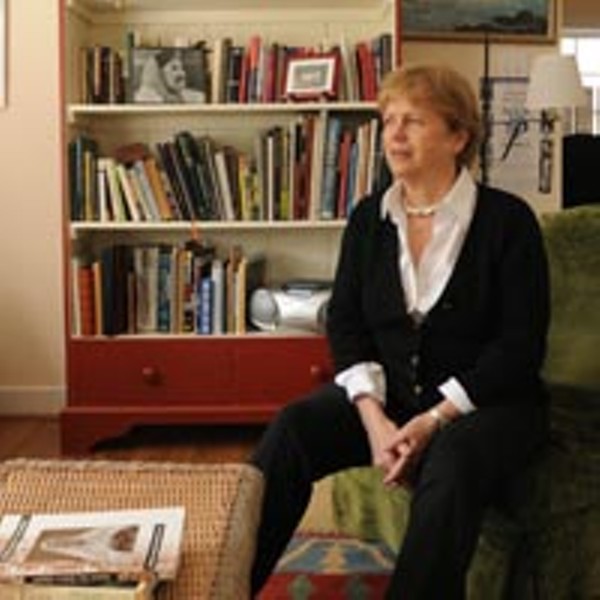 Don't be fooled by the placid scene of a wing chair on a swatch of grass in front of a white picket fence, which appears on the jacket cover of Phyllis Theroux's memoir, “The Journal Keeper,” published this month by Grove/Atlantic.

An unexpected love affair, 9/11, Hurricane Isabel, financial disasters, windfalls, insecurities, creative angst, miraculous blessings and all manner of death zing through the pages of Theroux's life in her 60s, as chronicled in her journal from 2000 to 2005. “I chopped off 2006,” she says. “Every writer has a terrible fear of boring people.”

Theroux is a writer's writer who's taught around the world and whose columns, essays and features have appeared in a laundry list of publications including The New York Times and Washington Post. She created the Great American Portraits Program sponsored by the Library of Congress and was a contributing essayist on the PBS's “NewsHour with Jim Lehrer.” Her books of essays, anthologies, memoir and fiction populate her resume, but she is modest, wondering aloud if she's worthy of an entry on Wikipedia.

She recounts how she was recently introduced at a gathering of artists and writers by way of her son, Justin Theroux, an actor with an impressive filmography who appears in “Parks and Recreation” and co-wrote the film “Tropic Thunder.” She says, laughing, “It was a great lesson in humility.”

This regular examination of her faults and her successes along with her deeply kind but unorthodox observations about everything from facelifts to her aging mother's feisty band of friends, the Immaculate Degenerates, make her prose accessible, to not only grandmas and diary scribes, but also anyone wishing to lead a more closely examined life. “I'm not the sort of woman who wants to please everybody, says Theroux, 71. “I feel out of step. I don't feel like I have to get the popovers popping over here.”

But she's found in her writing workshops that people are ready to remove the facade, hungry to connect to that deeper part of who they are. “I've had more women come staggering over the threshold so burdened by the expectations laid on them or that they laid on themselves, in my dining room, they were able to unclasp the iron mantle.”

While Theroux boards cross-country and international flights like some women flip channels on daytime TV, it's not her big moves that make reading about her life — primarily around her home in Ashland — so fascinating. It's the way she unpacks an afternoon or a single moment like the unfurling of a set of Russian nesting dolls, revealing surprises at the core that weren't visible from the surface.

In transcribing her journals, Theroux says that she hadn't expected to discover the “steady subtle proof” of a force larger than herself in the foreshadowing of her own entries. Adamantly against turning the word journal into a verb, she believes that the rewards of recording the seemingly jumbled sequence of life are accessible to anyone.

“What could be more practical than moving toward that thing for which you are best suited?” she says. “People talk about being a dreamer or being idealistic. But I think if you're lucky enough to know what you love you'd be a damn fool to do something else just to make a buck.”

And keeping a journal, she says, isn't brain surgery. “I have no discipline whatsoever,” she says. “Do you find it hard to slip into a hot bath at the end of a cold day?” But she didn't keep journals with such devout attention until later in life, she says: “I was too busy trying to load up my boat with supplies and trying to figure out who was going to be on it with me.”

She only writes, however, when she has something to say. I don't put down everything I think. It's like fishing. Sometimes the fish are running and sometimes they're not. I don't think you should feel obligated to pull up any old boot from the bottom of the pond.” S

Phyllis Theroux will be a panelist at the James River Writers' Writing Show, “Stranger Than Fiction,” on March 25 from 6:30-8:30 p.m. at the Children's Museum of Richmond. $10 tickets are available online at jamesriverwriters.com. Visit Theroux on the Web at journal-keeper.com.