The newly expanded Virginia War Memorial offers a place of contemplation during the pandemic. 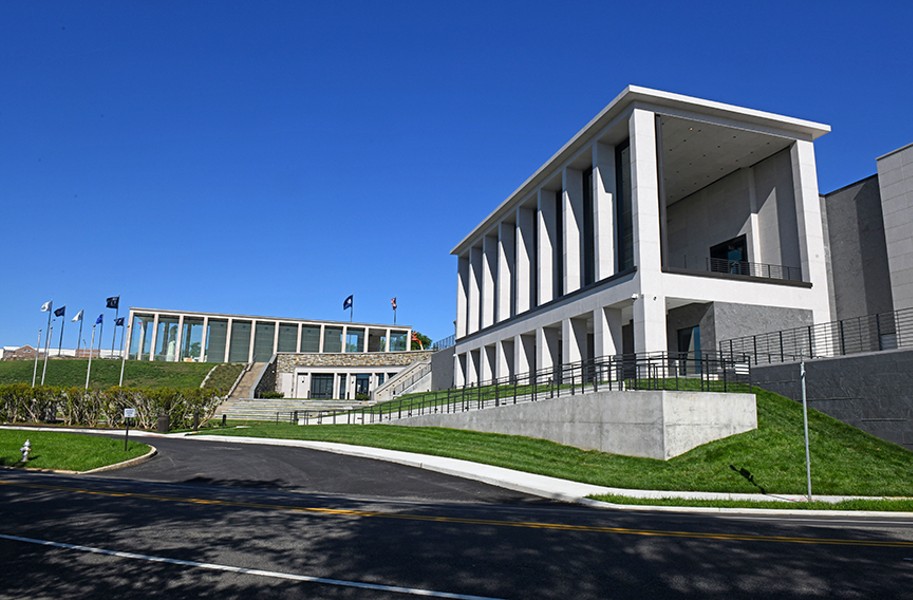 Officials had no idea what the day would bring.

Hundreds of people flocked to the just-expanded Virginia War Memorial on Saturday morning, Feb. 29, for the dedication of the C. Kenneth Wright Pavilion and the Shrine of Memory for the Global War on Terrorism & Beyond.

The $25 million structure adds 25,000 square feet of exhibition, library and meeting space to the dignified and Acropolis-like complex that has graced South Belvidere Street since 1956. Remarks by U.S. Sen. Tim Kaine and retired Gen. John P. Jumper, former chief of staff of the U.S. Air Force, probably stirred attendees’ emotions and sense of indebtedness to Virginians who died in Afghanistan, Iraq, Vietnam, Korea, or during World War II.

But those huddled in the memorial’s amphitheater on the eastern slope of Oregon Hill couldn’t have known that later that day Washington state officials would report the nation’s first death from the COVID-19.

Some now cite Feb. 29 as the D-Day for the evolving saga of grave medical and economic conditions. So, aside from a few St. Patrick’s Day bacchanals that continued until mid-March, the dedicatory activities on South Belvidere Street marked Richmond’s last major public gathering for the foreseeable future.

Despite the pandemic, sections of the enlarged memorial, now with two architecturally complementary open-air pavilions, can be visited during daylight. These lofty architectural spaces are serene settings from which to contemplate thousands of lives lost in war, as well as the current suffering, deaths and uncertainties brought on by an unseen viral force. The templelike pavilions offer space enough for social distancing as visitors scan the high, veillike glass panels onto which are etched names of the war dead. Simultaneously, one can survey the depopulated downtown skyline and riverfront in the distance.

The Virginia War Memorial is Richmond’s Acropolis. The irregular, L-shaped layout of the complex reflects ancient Greek hilltops where heroic gods and goddesses supposedly lived and were venerated. And since Greek deities apparently preferred to dwell in nooks and crannies, individual temple structures were positioned on hilltops asymmetrically while their architectural forms met strict standards of classical scale and proportion. Many centuries ago, mere mortals navigated these sacred complexes via sloping paths and winding roads. The Virginia memorial’s architectural scheme combines dignified classical proportion with a modern sense of simplicity. As a secular nation, the United States reveres its war dead as deities, regardless of rank.

It’s surprising, considering that it’s so revered a place, and given the state’s storied military history, that Virginia’s war memorial had a highly difficult birth. A temple on a hilltop was no sure bet when debate got underway in the mid-1950s immediately after the Korean War and not quite a decade after World War II. The public brouhaha was not unlike the recent controversial Navy Hill development debate. While none argued against the overarching goal of honoring the war dead, many people challenged public funding. The state’s fiscally conservative business and political establishment couldn’t wrap its collective head around financing a stand-alone memorial structure. Still smarting from the Great Depression and the debts from back-to-back wars, many leaders wanted to combine the memorial with a public school, children’s hospital or sports stadium.

Fred G. Pollard, a Richmond lawyer who represented Richmond and Henrico County in the House of Delegates, was adamant that the memorial also serve a highly practical use. The city’s two major newspapers campaigned against public funding and advocated that veterans do the fundraising. Later, the Bryan family that owned the dailies made its family estate near Ginter Park, Laburnum, available as the site of Richmond Memorial Hospital to honor the local World War II dead. That facility later moved to Hanover County to become Memorial Regional Medical Center.

But the naysayers were no matches for the leading advocate of an architecturally handsome memorial structure. John J. Wicker, (1893-1985), was a super-patriotic World War I veteran and Virginia lobbyist. He was also a founder of the American Legion and had represented Richmond in the state Senate from 1932-1936. Wicker didn’t just conceive grand civic ideas, he was untiring in selling them: In the early 1960s, he boldly claimed that the first Thanksgiving had been held at Berkeley Plantation in 1619, a full year before the Pilgrims set their pious feet on Plymouth Rock. That John F. Kennedy, a resident of Cape Cod, was in the White House, didn’t faze Wicker a bit.  Every generation of Richmonders has such gifted idea people: Todd “Parney” Parnell, the vice president of the Richmond Flying Squirrels, fits the bill today.

For the memorial he envisioned, Wicker had eyed since the 1940s the hilltop site at 621 S. Belvidere St. He considered it the city’s most visible location with steady local and out-of-town traffic moving in both directions. And being on U.S. Highway 1, it would catch tourists’ attention. But Pollard argued that since the Richmond-Petersburg Turnpike and Interstate 95 was then being built, the site would become increasingly less prominent. Another negative was the ominous State Penitentiary, now demolished, which loomed just two blocks north on Belvidere at Spring Street. It’s presence was a downer worthy of a Dickens novel. In addition, the inestimable local historian and preservationist, Mary Wingfield Scott, was totally opposed to destroying evocative old houses to build the memorial.

But Wicker, who lived nearby at the Prestwould, a fashionable high-rise apartment house, prevailed. And since he lived close by, and strode about town with an elegant cane, he could supervise construction regularly.

When money finally was appropriated by the General Assembly, a design competition was held among Virginia architects. Samuel J. Collins, a Staunton architect, and his nephew, Richard E Collins of Silver Spring, Maryland, won the commission. Both had graduated from the architecture school at Catholic University. A formidable Richmond talent who also had skin in the game as a consultant was Leslie Cheek, director of the Virginia Museum of Fine Arts. He was also a trained architect and friend of such modernist titans as Philip Johnson, Eero Saarinen and Frank Lloyd Wright. It was Cheek’s idea to include use glass panels onto which names of the war dead would be etched.

The immediately iconic memorial was at first a nine-column pavilion with the 22-foot-high allegorical statute of a woman, “Memory,” at the south end of the templelike structure. It was designed by Leo Friedlander, one of the nation’s leading modernist sculptors. He had previously designed many of the adornments to the Rockefeller Center, including huge female nude figures that flanked a main entrance to the RCA Building. The complex’s strait-laced developer, John D. Rockefeller Jr., despised them and avoided the sculptures by taking a back entrance to reach his office. The Richmond woman was carved from Georgia marble by stonecutters Joseph Campo and William Kapp.

An eternal flame was placed at the base of “Memory.”  However, it has failed on occasion to be eternal. In 1972 during energy crisis, the state extinguished the flame in a round of budget cutbacks. The savings were $300.

In addition to the Shrine of Memory, the original facility also had a modest office building and auditorium at the north end of the complex. In 2010, this structure was expanded with the Paul and Phyllis Galanti Education Center, an 8,000-square-foot reception center and museum. Galanti was a Navy pilot during Vietnam who was taken prisoner for six and a half years. His wife worked tirelessly for the release of her husband and others. Glave & Holmes Architecture was the designer. It broke from the memorial’s rectangular mold by establishing an oval entry space with large rounded bays. The amphitheater was also added at this time.

The newly expanded education center, a stalwart design by SMW Architects, returns to the rectangular mode. Its most dramatic point is the Shrine of Memory for the Global War on Terrorism & Beyond. Its glass wall is inscribed with names during the War on Terrorism, Beirut attacks and the USS Cole bombing. Some of the stone paving blocks in the open-air space are embedded with sand particles, flag fragments and glass slivers from world conflicts that span Omaha Beach, the Hanoi Hilton, Afghanistan and the Pentagon.

Inside and off-limits until the pandemic lifts is the C. Kenneth Wright Pavilion. It is named for a businessman who is also a major benefactor of the Virginia War Memorial. Also awaiting future exploration are the Anne Carter Robins and Walter R. Robins Jr. Grand Lobby, the Virginia Medal of Honor Gallery, Veterans Hall, a flexible, 350 seat auditorium; and the Veterans’ Art Gallery, which offers changing exhibitions of work by Virginia artists who have served in the armed services. These spaces sit atop three levels with 165 parking spaces.

The current pandemic has restricted most Richmonders movements drastically. But many of the city’s monuments await as open-air places of contemplation and renewal as a new group of heroes and heroines from a broad range of disciplines adapt to confronting an invisible enemy.