The Institute for Contemporary Art at VCU, by Steven Holl Architects, Is Efficient, Yet Astonishing

Scott Elmquist Visitors may enter the new gallery from the west via a sculpture garden.

For decades the most animated things at West Broad and Belvidere have been the huge helium balloons that appear each December — cartoony and wafting — in the Christmas parade. But for the past year it's been as if one humongous, origamilike Mylar balloon has been lodged at the southwest corner of that busy intersection. That's no balloon, of course, but the titanium zinc-clad Virginia Commonwealth University Institute for Contemporary Art at the Markel Center. It opened April 21 after a seven-year gestation.

The institute is anchored to its site by a sensitively designed, symbolic and highly functional complex devised by the internationally renowned firm of Steven Holl Architects. It is linked to the earth by numerous deep-drilled geothermal wells and other environmentally-conscience considerations. The four-level (three above ground), 41,000-square-foot, $41 million, and privately funded complex makes a transformative and aggressively contemporary statement amid unlovely environs that contain a chain drugstore store, surface parking lots and ho-hum institutional buildings.
The gallery and its adjoining garden also sit hard against two U.S. interstates and mark a major entry point to the university's sprawling Monroe Park campus. The fork-shaped building and landscaped areas (by Michael Boucher Landscape Architecture) gesture to the campus, the Fan District and neighborhoods beyond so effortlessly, naturally and engagingly that it's now hard to imagine anything else at this site.

The ICA represents the most dramatic example of architectural place-making, the act of transforming mundane environments, since completion 40 years ago of the Federal Reserve Bank downtown. While that shimmering high-rise, also designed by an internationally known architect (the late Minoru Yamasaki) has a metallic facade punctuated by striking glass fenestration, comparisons to the institute end there. The Fed follows the long and revered modernist thread of the academic international style. By contrast, the institute represents architect Holl's urge and ability to split with orthodoxy and deliver a unique and astonishing structure.

Key to understanding how Holl reaches his final design is to know that scores of drawings, paintings and three-dimensional models, lead him and his associates from laboratory to computer. And finally, to working drawings: BCWH Architects of Richmond was associate architect.

The Roman engineer Vitruvius posited in the first century, that by definition architecture must achieve two things in addition to beauty: It must also be permanent and useful.

Add something else: At the ICA Holl embraces symbolism.

Visitors can approach and enter the building from two points. The Belvidere Street entrance makes the grand statement that the entire community is welcome: Importantly, admission is always free.

Upon entering from Belvidere folks will probably stop in their tracks for a "wow" moment as they absorb a room like few others. To call the sweeping Royall Forum a symphony in white and light hardly describes the magnificence of irregularly defined, 33-foot-high space. It must be experienced to grasp both its embracing intimacy and soaring aspirations. And although there's comfortable seating here, Holl's design teases the visitor to explore spaces beyond. Along the Broad Street wall, the Pettus Stairway offers an intriguing climb to the second floor. 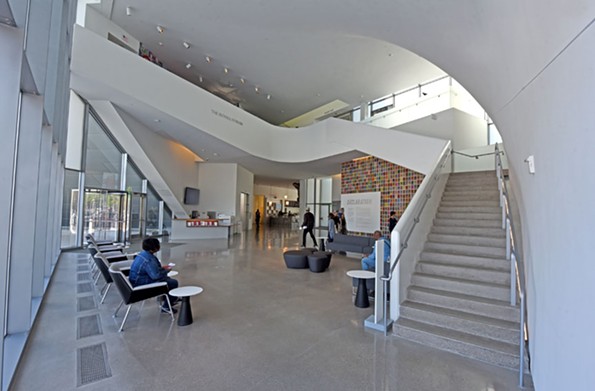 If one decides to remain downstairs, the entrance to Reynolds Gallery, a large rectangular exhibition space awaits straight ahead. From here, one can peer out through large windows onto frenetic Broad Street or, across the gallery, to a Zen-like garden with its calming water pond.

By entering the Reynolds Gallery one passes through a real and symbolic wall that Holl terms the "plane of the present." Since the ICA is not a collecting institution exhibitions and programs will change periodically. As the architect explained during opening week, "The 'plane of the present' is what you did this morning, [but] we're always changing." Similarly, contemporary work represents change.

Moving past the atrium's Ukrop's Reception Desk one can enter the ICA's 230-seat performance space. The shift from the light-filled, white-walled forum is jarring, but pleasantly so. The auditorium is embracing with warm-hued walls of cherry paneling. However, since the rake of the seating tiers is steep, the space should work best for films, lectures and concerts: Theater pieces will be frustrating to watch unless they feature the tops of performers' heads.

The second, and equally symbolic, main entrance to the institute is from midblock via the New Market Sculpture Terrace near North Pine Street. The garden links directly with the university campus beyond. Upon entering the building, one arrives at the Butler and Lewis Family shop, already stocked with books and other well-designed items, and moves on to the commodious Abby Moore Café, which is operated by Ellwood Thompson's Local Market.

Nearby is the large, not-to-be-missed industrial-sized elevator. Its interior is illuminated stunningly by highly patterned, perforated metal screen panels designed by Holl (the pattern is repeated in the garden pavement).

Whether one takes the elevator or stairs to the second level, it is easy to appreciate the unpredictable sculptural qualities and volume of the forum as experienced from the balcony. While ambitious in concept, the building isn't huge. Much of the genius in its design rests in how there's no wasted space — corridors, hallways or dead ends. All is yachtlike efficiency.

Finally, another open staircase leads to the building's pièce de résistance, the light-flooded third floor True Farr Luck Gallery. It is a chapellike place of contemplation, but also possesses a sense of verticality akin to being in an elegant tree house. And it is in this space that Holl's ability to mine natural light comes to a crescendo. High walls formed by parallel sheets of translucent etched glass (about 3 feet apart) serve to trap rays and provide a thrilling encounter with changing daylight.

Every inch of the institute is practical, surprising, welcoming and most importantly — flexible — as a place to show contemporary art. But since a university art gallery with high ambitions opens rarely, there's an especially festive gesture. It is offered by one of the 34 inaugural artists, Tavares Strachan. His words "You Belong Here" are emblazoned in pink neon along an upper West Broad Street exterior wall for thousands of passersby to see daily. Architectural thrills await those who accept the invitation. S