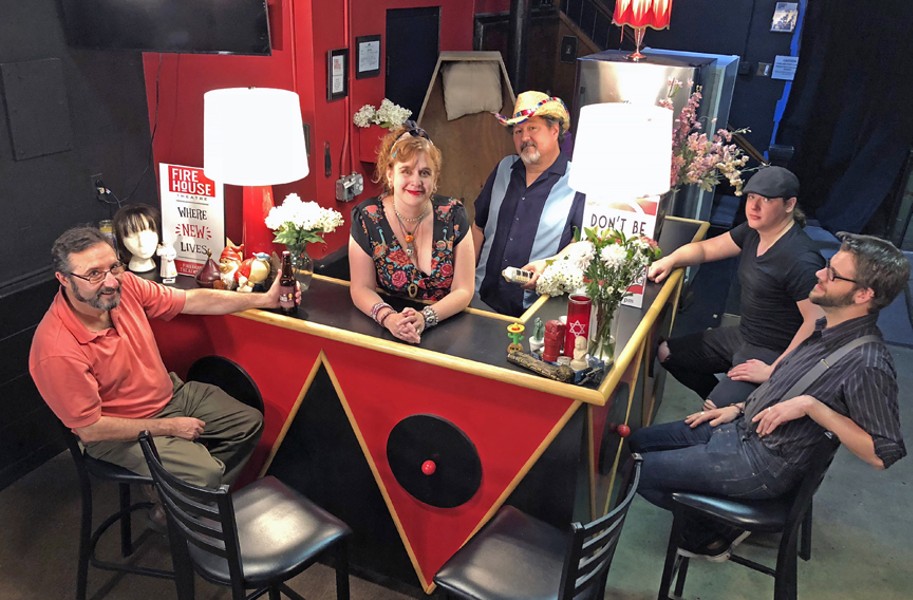 Imagine a campy send-up of a talk show that riffs on the BBC's "The Graham Norton Show," "Bill Nye the Science Guy" and Elvira, all while discussing death, loss and grieving.

Death is the beating heart of "Death Club Radio," a weekly show on WRIR 97.3 Richmond Independent Radio that manages to combine death talk and, when done live, ludicrous fun.

Playing host to the show is Alane Cameron Ford, a hospice chaplain who runs six grief groups and has been giving talks about death, loss and grieving for 20 years. While Ford had no radio experience when the show began in 2014, her husband Phil Ford had been doing his own show, "Breakfast Blend," on WRIR since 2006. Checking on her before her first broadcast to see if she needed any help, Phil inadvertently became part of the show.

"He sat down in the studio with me with zero prep and his excellent radio voice, bringing an Everyman perspective and great questions," Ford recalls. "Plus he's really funny. I'd be talking about Nietzsche and Phil's making me burst out laughing." Regular features include Obituary Roundup, Daily Something Weird and Jack Johnson's Hidden History.

Death Club Radio went on to collaborate with the storytelling event Secretly Y'All, Tell Me a Story and did live shows at Twisted Ale Brewery while Ford continued giving speeches to funeral directors, churches and the Greater Richmond Humanists. When she served on an expert panel at Firehouse Theatre for its production of "To Damascus," her radio show suddenly was on Producing Artistic Director Joel Bassin's radar.

"Death Club Radio Live" debuted at the Firehouse in May, with a noir theme and a coffin propped up onstage for effect. Plans are to continue the live shows bimonthly for the next year. It takes both Fords, along with the show's producer Jack Johnson, who brings a historical element to the shows, to create the radio gig and now to flesh out the live shows.

"We plan zany things for the live shows, which are much campier than the radio shows," Ford says. "But the point of the show is to get people to think about issues of death and dying they wouldn't normally consider."

She pinpoints our culture's reluctance to discuss death as having begun three generations ago when death left the home and became sterilized and hidden away.

Coming up this month are two very different Death Club Radio Live events at Firehouse.. First is Eating and Dying, an interactive performance and pop-up dining experience about funerary food, death and remembrance within the culinary community. A three-course meal with wine pairings and craft cocktails will be prepared by an Education and Agriculture Together, known as E.A.T., Foundation guest chef while the "Death Club Radio" crew entertains and informs about the connections between food and death.

"It's going to be pure, hi-octane "Death Club Radio" on Wednesday," Phil promises. "The E.A.T. show won't be quite as immersive. We're really excited about all this because it's very different for us."

Attendees can expect to be seriously involved. "Almost from the time you come in the door, it's going to be very interactive, and more so as the evening moves along," Ford says. "By the end of the night, they're not the audience, they're part of the performance."

The goal of both July events mirrors Ford's goal for her weekly radio show and her professional life: to bring discussion of mortality to people's everyday lives. "Every single day I meet people who are spiritually and emotionally decimated because they never considered death would come into their lives. Any way we can bring people into that reality is good."

"But not in a boring or scary way," Phil is quick to add.

As befits an evolving field of study, Ford is constantly reading medical journals as well as popular literature that deal with the more creative aspects of dying. Recently, she finished playwright, actor and author Sam Shepard's 2017 book, "Spy of the First Person," a book she describes as surreal for how it walks the line between fiction and nonfiction, dealing with Shepard's experiences with amyotrophic lateral sclerosis during the final year of his life.

Ford incorporates this kind of information in her shows all the time.

"It's not all that difficult to prepare my radio show because I'm always doings these talks," she explains. "But figuring out where to find an Elvira outfit, that's a little trickier."

However, audience members should have no such technical problems getting ready for the show, according to Ford. Dress code for both events is sporty funeral home or comfortable cemetery stroll. "Definitely not wake attire-worthy."