The History of the Arthur Ashe Monument in Richmond

In 1996, adding a statue was just as controversial as trying to remove others. 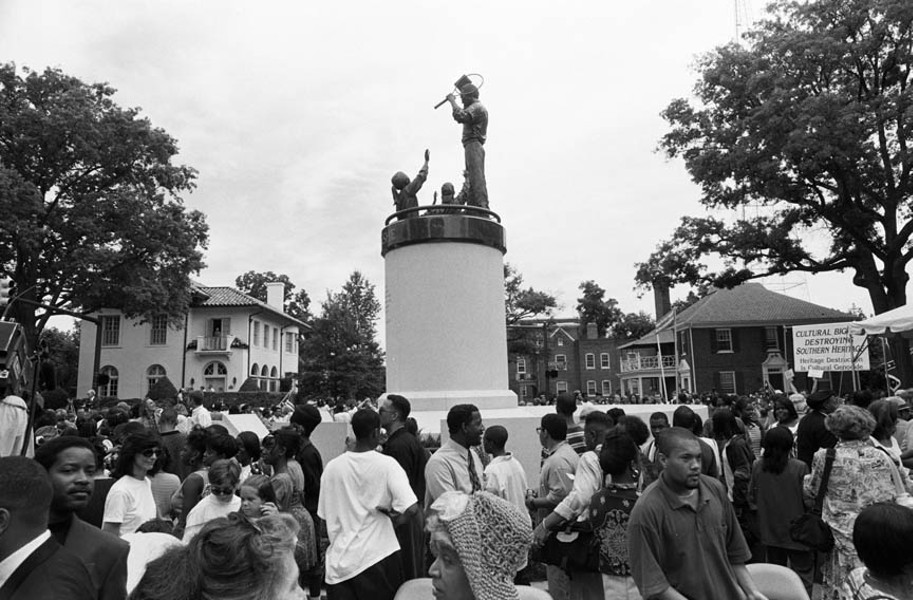 Stephen Salpukas Supporters and protesters gather at the Arthur Ashe statue on July 10, 1996, at its unveiling on what would have been the tennis star’s 53rd birthday. He died in 1993.

It was the early 1990s, and City Councilman Henry “Chuck” Richardson was watching the angry, recently liberated people of the former Soviet Union tear down statues of Stalin and Lenin — and it got Richardson thinking.

“Richmond should represent a continuum of history and not just a snapshot during the Civil War era,” he tells me, in between drags of a cigarette in his Carillon home. He explains how the Arthur Ashe statue on Monument Avenue was born.

The famed tennis player and Richmond native who championed education and civil rights around the world was still alive and in the Richmond area then. Sculptor Paul DiPasquale heard Ashe speak at an event and was impressed by what he heard. The artist had just finished the Brown’s Island “Headman,” which went on to be the centerpiece of the city’s flag. He was working with Richmond Renaissance, now Venture Richmond, and proposed an Ashe statue as a follow-up.

DiPasquale says wanted to create an autobiographical statue — a piece supported and approved by Ashe.

Unfortunately, two weeks after the sculptor and tennis player spoke, Ashe died from complications from AIDS. He contracted the deadly virus through a blood transfusion. Ashe’s AIDS would help bring the disease out of gay clubs and into the mainstream, another accomplishment for a man who already had done a lot.

After Ashe’s death, DiPasquale continued to work with his widow, Jeanne, and received her approval for the final piece. Monument Avenue, the statue’s eventual home, was not mentioned at all during this part of the process.

Around this time, Richardson put his thoughts on paper and at City Council proposed a statue honoring a local civil rights leader on Monument Avenue, he says, and the hate started pouring in.

“Everybody went haywire: ‘A black on Monument Avenue?’” Richardson recalls. “‘Are you out of your fucking mind?’”

Meanwhile, DiPasquale had been hard at work on the Ashe project. He’d built a model of the statue and alerted the Arthur Ashe Memorial Committee. They were impressed with his work. According to DiPasquale, a year after Ashe’s death the group suggested renaming the Boulevard as Arthur Ashe Boulevard. The sculptor’s project, however, offered a new way to immortalize the man.

The council meeting that followed became legendary. The five-hour session was broadcast internationally. Among those who spoke against the statue was R. Wayne Byrd Sr., president of the Heritage Preservation Association based in Danville. The group’s purpose, it says on its Facebook page, is “to protect Southern symbols, Southern history, and Southern culture.”

At the time, Byrd called Monument Avenue “hallowed ground” and suggested Ashe’s statue should go up at the Byrd Park tennis courts — a place that he wasn’t allowed to play as a child. “[It] would pay the proper tribute to a great athlete without violating the historic sensibilities of Richmond’s Confederate-American population,” Byrd said.

Byrd and his group believe, he says now, “City Council just wanted to put a black person on Monument Avenue, feeling like it was striking back. Ashe was being used as a pawn in a game of politics.”

After almost 20 years on City Council, Richardson was arrested for heroin-related charges within weeks of his Monument Avenue proposal. With the council member behind bars, it was then-Planning Commission member and eventual House of Delegates representative Viola Baskerville who took the ball and ran with it.

“This was a city street designated for monuments, but I didn’t remember anywhere where it said there was an exclusivity as to the types of monuments,” Baskerville says. Heritage groups such as Byrd’s would show up in full Confederate garb and speak out against Ashe’s place on Monument Avenue. “That took a lot of people by surprise.”

Baskerville and DiPasquale say there was lots of fighting, and Ashe’s statue was in the middle of the debate about race, history, misinformation and aesthetics. But Ashe’s recent death and his history as an activist and Richmond success story won out in the end.

“The city [government] couldn’t argue — everyone was in favor of Arthur,” Richardson says.

So, the dreams of DiPasquale, Richardson, Baskerville and many others came true. Nonetheless, once in place, protests continued around the statue — but Ashe still stands, holding a tennis racket and a book, the lone black man on Monument Avenue.

A new conversation has now begun. After the events in Charlottesville, Richmond Mayor Levar Stoney widened the scope of the Monument Avenue Commission to consider removing the Confederate statues. Those who were instrumental in the street’s last addition have ideas as well.

Byrd thinks the monuments’ removal would erase a big part of Richmond’s history. “I think it’s best to just leave everything like it is and remember it and respect it,” he says.

Baskerville, who has since retired from government work, says the statues should be moved to a place where they can be given better context.

“This is 2017, and Richmond is a different city [and] demographic. It’s trying to move on,” she says. “If they want to honor Mr. Lee, find a Confederate cemetery or museum. Use the empty space that citizens have to maintain with their tax dollars to tell a deeper story about our city.” S