The History of Art Deco in Richmond 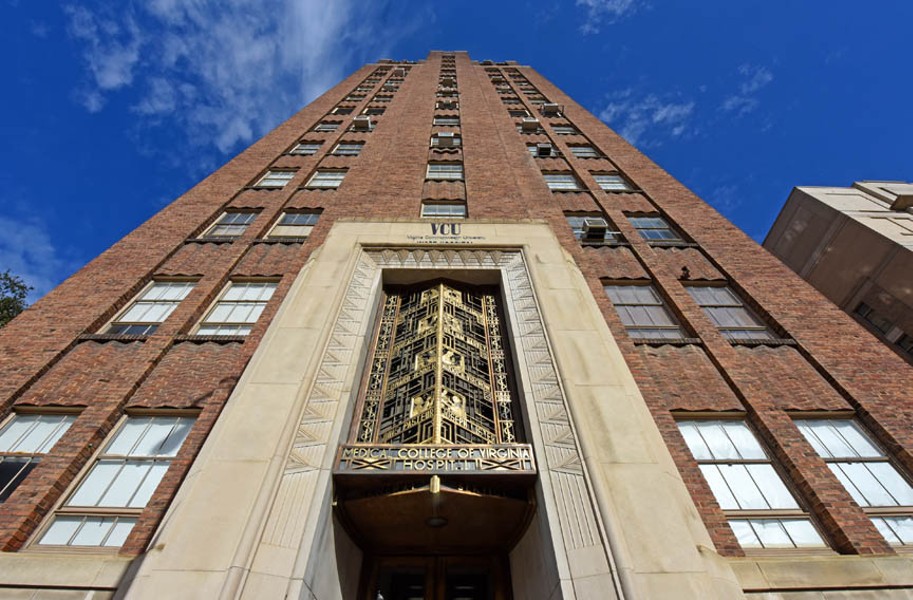 Scott Elmquist The West Hospital at VCU was designed in 1940 by Baskervill and Son. Its brick-and-stone Broad Street facade is punctuated by a bronze grille illustrating prominent figures in medicine.

What is art deco?

Art deco was an art form that took its name from the trailblazing Paris Exposition Internationale des Arts Decoratifs et Industriels Modern of 1925. The design style emulated internationally from that event, and soon was found in all aspects of furniture, industrial, household, fashion, jewelry and architectural design.

In the United States, as commercial and high-rise buildings were being built at a fast clip, the streamlined aspects of art deco — symbolizing height and speed — were fused with new historicist inspirations from recent archeological discoveries in Egypt and in Mexico’s Mayan peninsula. Among the popular motifs were fluting, flowing water, thunderbolts, chevrons and frets.

How did renewed interest art deco occur? In 1971, the Minneapolis Institute of Arts presented the first international and encyclopedic exhibition of the neglected style. “The World of Art Deco” showcased hundreds of objects, from automobiles to perfume bottles.

In 1974, a major art deco show was held at the lavish Radio City Music Hall, a building that was always recognized and preserved as a masterpiece. This brought together major dealers and collectors. Among the early devotees of the revival were people who had memories of visiting World Fairs held in Chicago (1933) and New York (1939) that had embraced the spirit and look of the style. 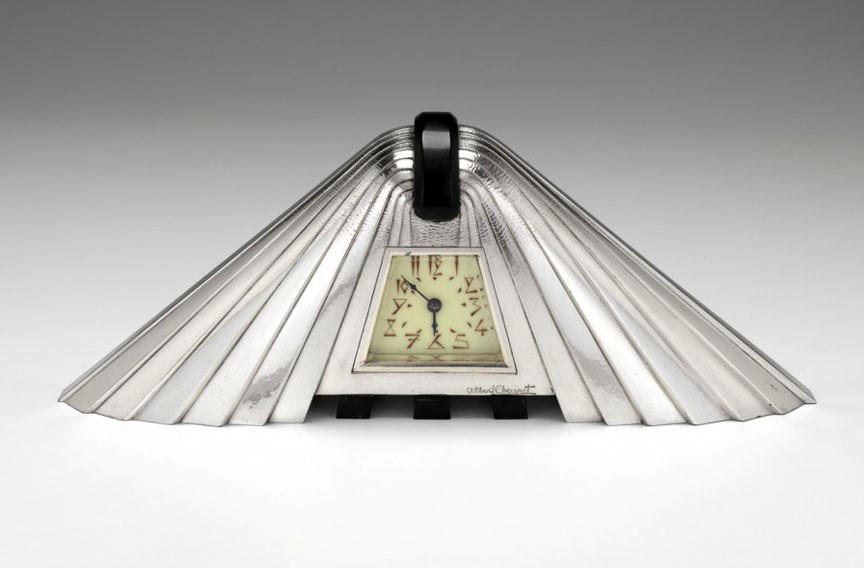 The economically challenged 1970s also saw a revival in films from the depression era. “Dinner at Eight,” “The Women,” and such Busby Berkeley musicals as “Gold Diggers of 1933” and “42nd Street” headlined film festivals.

By the mid-1980s in Richmond, visitors to the Virginia Museum of Fine Arts came to know the style because of the collecting and generosity of a local couple, Sydney and Frances Lewis. They were passionate in their quest for 20th-century contemporary art. Their artist friend, Theodore Stamos, whose work they collected, introduced them to art deco. Another friend, Andy Warhol, and their curator Frederick Brandt, also devotees of the form, further encouraged their collecting on an ambitious scale.

“The Metropolitan Museum of Art and the VMFA have the two best art deco collections in the nation,” says Barry Stillman, curator of decorative arts at the museum. “There is no question, the Lewises bought the best pieces by the best artists and [because of Lewis family-endowed funds] we are constantly looking for additional pieces to buy.”

If commerce and industry is a cornerstone of America, it speaks to the power of art deco design that the Chrysler and the Empire State buildings are the two most recognizable skyscrapers in the world.

In Richmond, the Central National Bank Tower, designed by architect John Eberson in 1929, is the best-known local high-rise.

And while the generation that grew up with deco may have ignored its power and charm, more recent generations have embraced the design style. 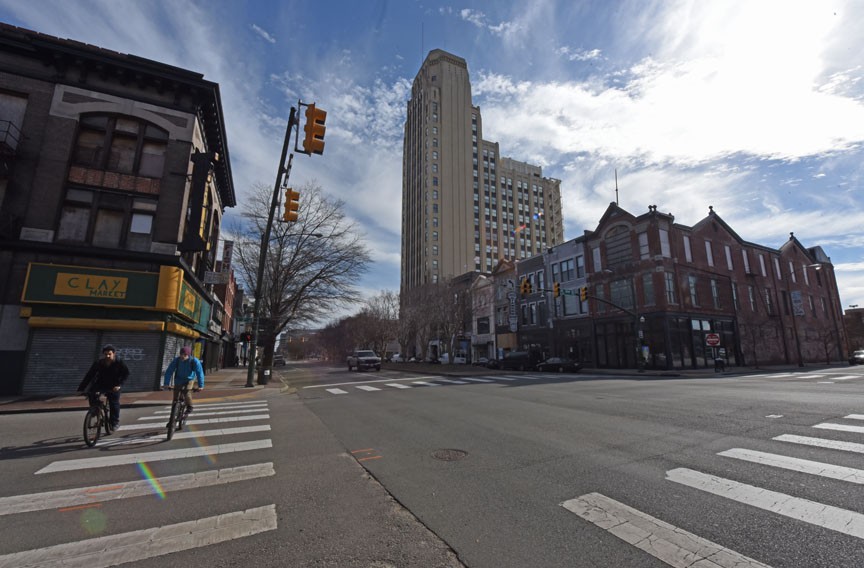 At 12th Street, on the Virginia Commonwealth University medical campus, the brooding, dark-red brick West Hospital appears to shore up Shockoe Hill. But its profile thins and becomes like a Mayan pyramid at the roofline. On the peak, a revolving red light is almost festive, a kind of Rudolph the Red-Nosed Reindeer warning for aircraft.

Nine blocks away at Third Street, the taller and svelte Central National Bank building rises with similar setbacks, its beige brick and colorful tile décor all but sparkling after a needed restoration. A generation ago its building setbacks near the roofline boasted an electrified signal too — in huge, blocky letters. These signaled meteorological changes: Green meant cooler temperatures, red meant warmer and blinking predicted precipitation.

Today, the West Hospital’s primacy on the skyline is diminished somewhat, melded into a nest of newer high-rises. And the bank tower was recently converted to apartments, re-branded the Deco at CNB, and no longer forecasts the weather.

But the former bank and medical buildings weren’t just boldly modernist statements when they were built in 1927 and 1940, respectively, but proudly art deco. The exuberant mix of terrazzo, stone and brass are as integral to the two complexes as their profiles and massing.

Richmonders have never quite been sure what to make of art deco, an ultra-chic design style that sprang from Europe — Paris, mostly — and enjoyed an elegant half-decade in the United States, coming into full flower during the Great Depression in the 1930s when it was toned down to reflect the economy and the effect of the Machine Age.

Deco wasn’t only for luxuries like a spectacular bank headquarters here or an automobile corporate headquarters like the Chrysler Building in Manhattan, but everyday items and household appliances.

And architecturally, the magnificent 1920s art deco Thomas Jefferson High School, at 4100 W. Grace St., marked a decorative high point with its distinctive ziggurat and exterior friezes that depict historical figures and events. During the Depression such neighborhood movie theaters as the Bellevue, the Hippodrome and the Henrico were no less reflective of the style but decidedly toned down.

With a return to prosperity for many people after World War II, art deco, once simultaneously accessible and jazzy, lost its appeal to those who had grown up with it. Those who considered it garish would scoff archly at the tackiness of the modest-sized, middle-class hotels in Miami Beach with their festive adornments. 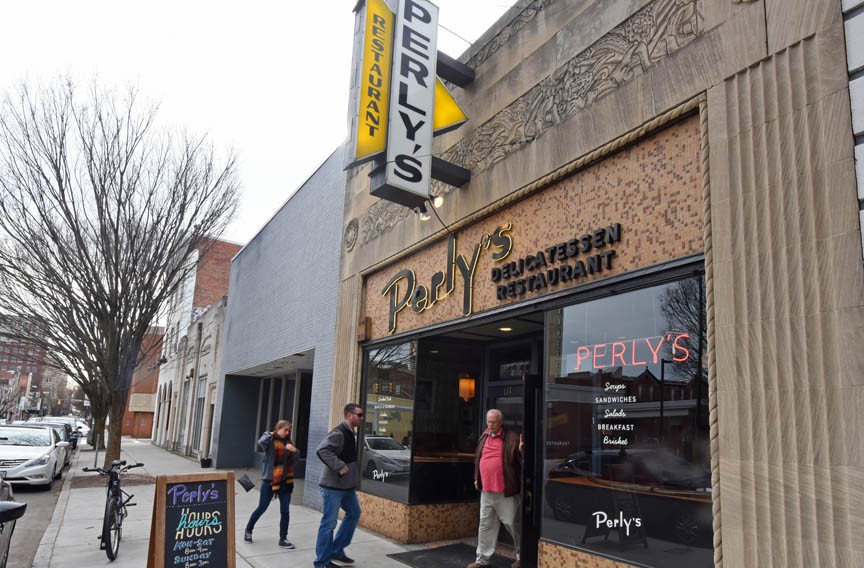 Well, they scoff no more: For a generation now, Miami’s South Beach has become a phenomenal mecca with international visitors who are drawn to art deco hotels and apartments, restored to full sherbet-colored glory. Richmond can’t claim so tropical a color palette and the Atlantic is 100 miles away, but art deco design here is suddenly visible to a new generation.

This was spurred by the restoration of the 20-story Central National Bank building and its conversion into apartments. As long as that tower was empty, it signaled despair. But now it”s occupied, nearby blocks that boast art deco buildings also have been energized as apartments, shops, small businesses and especially restaurants, filling more intimate spaces.

A former furniture company, the 1931 Sydnor and Hundley Building at 108 E. Grace St., designed by Carneal and Johnston, has a vertically oriented facade suggestive of a skyscraper. It was one of the first buildings to be retrofitted to residential use among a trove of art deco survivors along Grace.

The facade of Perly’s Delicatessen and Restaurant across the street, designed in 1930 by H. Carl Messerschmidt, is a brilliant example of how art deco interpreted classical architecture, but stripped-down and in low, sharply vivid relief.

Two other restaurants nearby, the Red Door, at 314 E. Grace and Rappahannock at 318 and 322 E. Grace — both built in 1930 — exemplify the simpler end of the art deco scale. But neighboring buildings, such as the 1928, three-story building at 306 E. Grace by Carl Lindner, reveal that full-blown examples of the style abound here.

Moving eastward down Grace toward Capitol Square, you catch a once-obscured view of one of the region’s deco masterpieces, the Verizon Building at 703 E. Grace St., on the corner of Seventh. Its core was built in 1929 and designed by a New York architecture firm, Voorhees, Gmelin and Walker. The iconic copper, pyramidal crescendo atop the VCU West Hospital designed by Baskervill and Son, certainly was inspired by this roofline from a decade earlier. 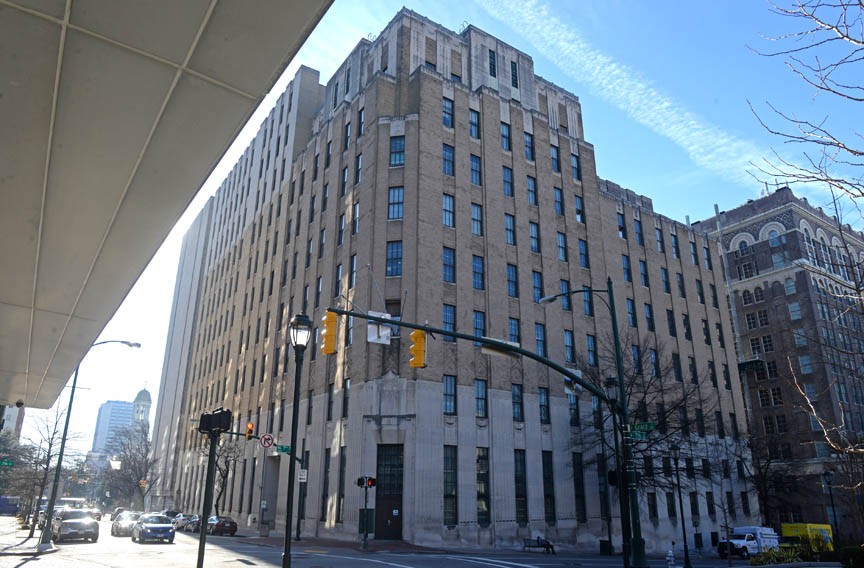 Veering a block off West Grace Street reveals additional art deco treasures. One of the Richmond area’s masterworks lies buried within the superstructure of the Richmond Public Library. In 1972 the handsome limestone facade, designed in 1929 by Baskervill and Son, was encased in a brutalist wrapping, proof positive that midcentury modern architecture once trumped deco. In recent decades, library officials have come to fully embrace its inner deco, even having some major interior spaces painted in bold colors inspired by a recent restoration of the Rainbow Room restaurant in New York’s Rockefeller Center.

The Hilton’s handsome East Broad Street facade at Sixth Street is the update that the Miller & Rhoads department store applied in 1930. Classical elements in bas-reliefs and sandstone create a stylish and assyrian revival front that now welcomes diners to the hotel’s La Grotta restaurant.

Moving south from Grace Street on Sixth, you find perhaps the most unlikely but delightful of downtown’s art deco treasures — the Richmond Parking Garage at 107 N. Sixth.

At first glance it appears to be a well-tailored and perfectly delineated office building with effete classical decoration. But a closer look reveals that renaissance revival floral elements on the ground floor give way at the frieze along the roofline to visual touchstones to the industrial, and more specifically, automobile age.

In 1927, when the economy was still flush and many folks could afford cars, architectural firm Lee, Smith and Van der Voort placed cast concrete automotive tires and a hood grills along the building’s roofline as the crowning elements. The building’s 1920s ramps don’t accommodate early-21st-century sport utility vehicles, so the building sits empty. But longtime devotees of art deco design, as well as people who are coming around to its sometimes elegant, sometimes brassy charms, know that this garage is not only a keeper, but also an important — and witty — object in a larger collection of architectural marvels. S