The Hairiest Man in Used-Book Activism 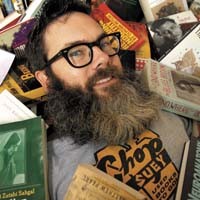 A lot of people know Ward Tefft. He's the friendly young owner of Chop Suey Books with the Grizzly Adams beard, who's giving back to the community and providing local artists with a place to congregate, and to sell and display their work.

Originally from Maryland, Tefft was an English major at Virginia Commonwealth University in the early '90s, before moving away and returning to Richmond in 2001. In 2002, he opened the first Chop Suey Books, which buys and sells a variety of used books A second store, Chop Suey Tuey, has since opened in Carytown.

Tefft decided to leave one room of the original building empty so he could serve as host to monthly art shows. "We've been able to share that with a lot of local artists and international artists," he says.

The store also is known for hosting the Bizarre Market, which usually runs along the side street next to the store, allowing anyone to set up booths to shop their wares -- handmade coffee mugs, paintings, maybe underwear made from T-shirts. The store asks people to donate 10 percent of what they make that day, which Chop Suey then donates to a nonprofit such as Art 180, or the Read Center, a local literacy program.

The market "helps to tie artists in with nonprofits," Tefft says. "Richmond is full of creative people, and I feel like I'm more of a facilitator, sort of a hub."

Tefft also is involved with the innovative Books-On-Wheels giveaway, which he does by bus (the Mo' Book Mo' Bike Mobile) with friend Shelley Briggs, who offers free bike repair. Tefft says a lot of the donated books he couldn't sell were being left outside, where they were ruined by the weather or used as projectiles by violent nonreaders. The bus has been all over Richmond, including an eight-day run of Richmond libraries, and has also been down to New Orleans. It recently returned from a two-and-a-half week jaunt to New York and Chicago.

"We learned a lot from the first tour about where to set up. This time we worked with a lot of nonprofits," Tefft says. "It was really inspiring to see what people in other cities are doing and to bring back some of those ideas."

Although he stays busy running his shop and giving back to the community, Tefft isn't one to toot his own horn and shares credit where it's due. "Really," he says, "I'd have to say the friends that I've met here are crucial to everything I do."