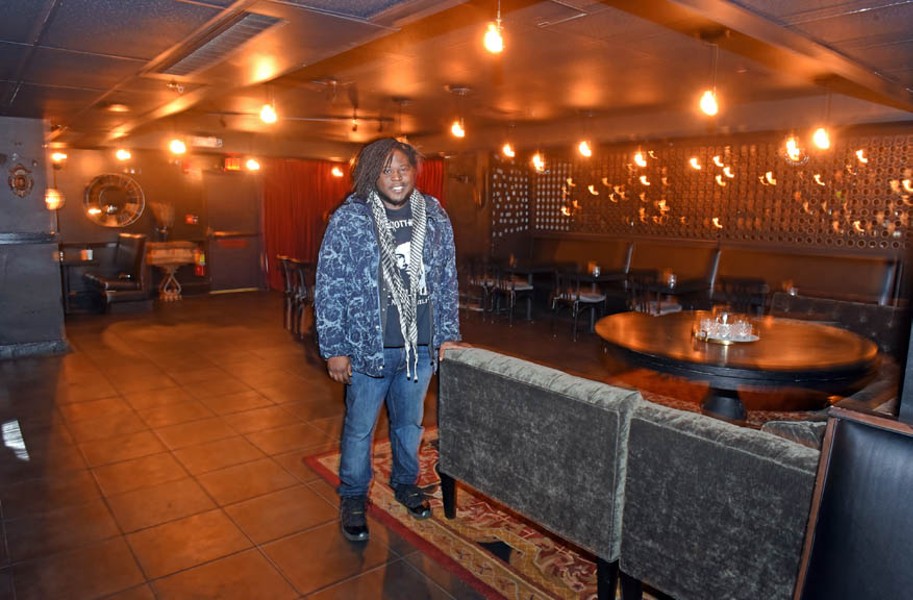 Scott Elmquist Well-known musician Reggie Pace stands in the intimate performance space beneath Vagabond restaurant, next to the National. Pace is bringing a musician-friendly approach to booking the late-night spot.

Descending wide, winding steps to a short, dark hallway leads to a dimly-lighted space beneath Vagabond restaurant, which sits next to the National on Broad Street.

The low-ceilinged basement club, known as the Gypsy room, already has earned references from some Richmond musicians as the city’s equivalent of the famed Village Vanguard in New York. The intimate room’s design and attention to detail create an unusually flexible range of possible moods.

“It can replicate the nuances of a relaxed 1950s jazz lounge as well as the excitement and rowdiness of a Prohibition-era speak-easy,” says jazz pianist Macon Mann, who also raps as MC Chicken.

Bookings started when manager Andrew Betourne asked Mann to quickly host and curate a Wednesday night jazz series. He decided that the easiest solution was to play the inaugural night as part of a band that included Richmond jazz legends Billy Williams and Mike Hawkins.

Now musician Reggie Pace of No BS Brass band has been tapped by Betourne to book events for other nights — and the room could be on its way to a cult following.

Pace is taking a page from the Vanguard’s playbook by deliberately choosing an eclectic schedule. He’s featured longtime collective the Devil’s Workshop along with comedy, alternative rock, house music and young bands getting their feet wet. He says he hopes to add storytelling, literary events and experimental nights for noise bands.

“My main vision is for this to be a collective with different types of music from different scenes done in an original way to maximize what the city can do and complement what other venues are doing,” Pace says.

A new PA system is being installed to augment the space’s already impressive sound, which jazz musicians describe as not “boomy,” meaning they can play without amplification. “Low ceilings give it a speak-easy feel, but also condense sound,” Pace adds, allowing that minor tweaks should make it ideal.

As a seasoned musician with international stints touring with Bon Iver and Sufjan Stevens, Pace views his role as an instructional one for bands just starting out.

“It’s about teaching them that they’re walking into a business,” he says, “and 50 percent of the responsibility of bringing people to the club is theirs.”

He wants to provide a place where bands can play without being held to the bar making a certain amount of money, he says: “Bands should bring people to the spot to build that culture and working relationships.”

For drummer Scott Clark, the Gypsy room feels like the closest thing to the old Commercial Taphouse: a cozy listening atmosphere that allows musicians to try new groups or new music. Vibe and staff make it an extremely musician-friendly place to play, he says. But to him, it’s also a great listening room.

Live music is scheduled Tuesdays, Wednesdays, Fridays and Saturdays, with comedy on Mondays. Many events are free.

“Keeping the balance of types of bands while dealing with a million schedules is a difficult shuffle,” Pace notes, promising he’ll rearrange if events don’t thrive on a specific night.

Trombonist Reggie Chapman’s band, Pressure Fit, recently played to a packed room, digging how the dim lighting and low ceilings created a speak-easy atmosphere. “Without having to use excessive sound reinforcement,” he says, “everyone could enjoy the music.”

Pace says, chuckling: “Every musician wants to play for people, no matter what they say. You can’t have too many venues because there’ll always be more bands who want to play than venues.”

As for the Gypsy room, he says, “I want this place to be part of the conversation.” S

Trombombs performs at the Gypsy Tea Room on March 1, Post Sixty Five, Minor Poet, Majjin Boo and Will Wickham perform on March 2, and DJ Casiim plays the No BS afterparty on March 3.