Owen Wilson gets around in "Midnight in Paris." 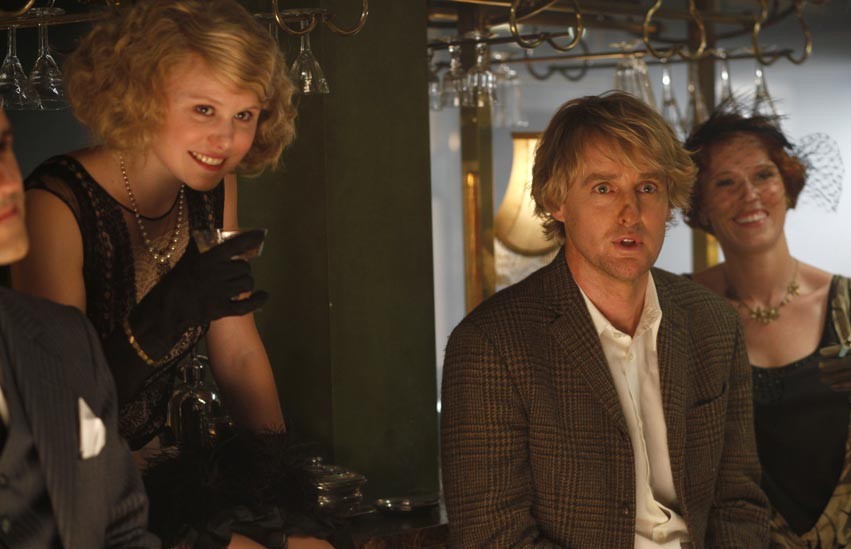 In the pantheon of Woody Allen protagonists, Gil Pender (Owen Wilson) is a rarer but thoroughly likeable type. More confidently easygoing than Allen's more familiar neurotic stand-ins, Gil is an endearing innocent abroad in the director's hilarious and highly enjoyable new film, where Wilson plays a man visiting present-day Paris who gets a surprise visit from the artists and literati of the 1920s.

The movie is reminiscent of "The Purple Rose of Cairo," Allen's picture in which Mia Farrow's Depression-era housewife, an avid moviegoer, watches in astonishment while her matinee idols began talking to her from the screen. Gil's fascination is with the Paris of flappers, absinthe and hand-crafted automobiles — daydreams his fiancee, Inez (Rachel McAdams), barely deigns to humor as they vacation with her parents through the cobblestone streets of the 14th Arrondissement, behaving like typical brusque and clueless Americans. I've never seen mispronunciation made this funny.

While in Paris, Gil hopes to finish his novel, an exercise Inez hopes he gets out of his system so he can go back to his successful, formulaic screenplay writing. Gil suggests they move to Paris. Inez wants a house in Malibu, a tension that Allen mines for many comic gems while Gil follows his bossy bride-to-be from this function to that. The mismatched couple is further disrupted by the appearance of Inez's former professor (Michael Sheen), a hilariously officious pedant who interjects anecdotes and history lessons at every tourist stop.

Late one night after a wine tasting and heavy dinner, Gil breaks off from the group to stroll back to the hotel on his own, hoping for inspiration, a desire fulfilled beyond his wildest imagination when he's invited to a party by another young couple who introduce themselves as Scott and Zelda Fitzgerald. Gil takes them for clever wits, but his assurance erodes when the pianist turns out to be Cole Porter, and their best friend is Ernest Hemingway (Corey Stoll). Hemingway offers to show Gil's manuscript to Gertrude Stein (Kathy Bates). Allen wrings a lot of laughs out Gil's initial encounter, slightly inflating the stereotypes of these luminous literary legends into gentle parody.

Gil saves Zelda from jumping in the Seine. Hemingway, forever advocating manliness, shouts at a party, "Who wants to fight?" Later, Gil meets Dali (Adrien Brody), whose answer to every problem is to imagine a "rye-nah-saruss." Gil's enchanting journeys into the past balance Allen's evisceration of the present, in which he mocks everything from the tea party to antique shopping.

At first Gil is incredulous, then wide-eyed at the realization that he's "hanging out with the Fitzgeralds," and listening to Cole Porter in person. When he tries to tell Inez — "Gertrude Stein is going to read my manuscript!" — in that ingenuous banter that's signature Wilson, she barely pays attention, writing off these hallucinations as part of her fiance's cute idealism. After Gil's attempt to include Inez fails, he meets a beautiful and charming '20s girl (Marion Cotillard) in the midst of a breakup with Picasso and Hemingway. She thinks the jazz age is shabby, and yearns for the lost refinements of the belle epoque, whose well-mannered Edwardians surely look back into the past for some other era to admire.

Even though he's averaged a movie a year for more than 40 years, it's a wonder Allen hasn't made this film before, springing as it does from his well-known interests and obsessions, mirrored in Gil's love of '20s Paris and its society of painters, jazz musicians and expatriate writers. "Midnight" ranks among the best of Allen's late-career run of successful nonautobiographical comic dramas, like "Vicky Christina Barcelona" and last year's "You Will Meet a Tall Dark Stranger."

"Midnight" is funnier than both of those films, although "Stranger" had stronger things to say about life and relationships. Wilson is perfectly cast as Gil, and Allen also gives McAdams one of her best roles to date as his foil. Marion Cotillard has never been more enchanting.

The movie's point, that every generation looks back to another as the true golden age, is, as Gil admits, "a minor point, but a good one." So too for "Midnight in Paris." It might be a minor film in Allen's career, but it's a good one. (PG-13) 94 min. S