From Metallica tours to Grammy nods, Lamb of God is louder than ever. 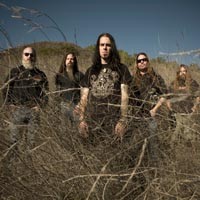 When their new album, “Wrath,” debuted at No. 2 last February, Richmond's heavy-metal kings Lamb of God were as surprised as anyone. Members of the five-piece band hadn't hyped the disc beforehand and had purposefully crafted a more aggressive and less polished record than their previous release, “Sacrament,” which hit No. 8 on the Billboard 200.

“After the last record, the label and the band thought we had reached our peak maybe,” drummer Chris Adler says. “I think people were curious where we were gonna go — radio hit or big money. When we stayed true and made the music we wanted, [the fans] stayed with us and brought friends.”

Translation: The “Wrath” album was but a mere 5,000 units away from debuting at No. 1 — an unheard-of feat for any metal band — and it made the Top 10 in many European countries.

It's been a banner year indeed for one of Richmond's most successful musical exports. Lamb of God also got its second Grammy nomination for Best Metal Performance and was invited as direct tour support for Metallica, the world's leading hard rock band and one of its top-grossing acts. At pretty much every show last summer, Lamb of God played before 50,000-60,000 people.

Adler says the band wasn't sure what to expect from Metallica.

“We had seen the movies and heard the more recent albums,” he says. “But they were really a class act. They hung out all the time, took us out to dinner, drinks. Adler says that Metallica frontman James Hetfield has an impressive knowledge of Richmond bands. “He asked me what I knew about Loincloth, this really obscure Richmond band that only had a four-song demo a few years ago.”

Adler also got a lesson in rock-star partying from veteran drummer Lars Ulrich. “I was giving him a hard time the whole tour for his playing, and who's giving who lessons up there, then one night he took me out and I've never felt worse in my life the next morning. … He put a severe hurtin' on me.”

Known as one of the best double bass drum players in metal, the 37-year-old Adler has to stay in top physical shape to perform the band's intricate thrash-speed metal nightly. When Style Weekly speaks with him, he's just come from a workout with his wife and daughter at the Jewish Community Center.

“Young kids are dying to be in our shoes, so for us to maintain our edge does take a lot of work,” Adler says. At home, it's five days a week at the gym plus drumming for three hours a day, and he tries to work out on tour. “In the end, I want to be proud of all the records we put out,” he says. “There will be a point where I say, ‘I don't know if I can outdo myself.' For now, I'm trying to fight the inevitable by taking care of myself.”

Being in a famous band doesn't seem to have changed the members much. Adler and vocalist Randy Blythe still reside in the Fan during the brief times they're home, and other members have moved to the East End. “We've all kept it simple, nobody went out and bought the big mansions or Lamborghini,” he says. “We owe a lot to this town and the supportive people we met along the way.”

He adds that the competitive nature of Richmond's music scene helped them early on: “There's a real push here. You gotta know what you're doing before you get on stage. It's a cutthroat scene and it certainly helped us.”

Adler plans to approach the upcoming Grammy show like the first time and enjoy it. But not Blythe, who's again boycotting the award he believes to be a sellout move. “He's gonna be buried in his punk-rock bunker six stories down from the rest of us,” Adler jokes, “wondering which color to dye his hair.”

The rest of the band doesn't have a problem being honored by the National Academy of Recording Arts and Sciences on Jan.  31, even if the awards are more driven by commerce than artistic achievement. “They're not accurate most of the time. … but to be recognized by anyone is special, certainly the leading organization,” Adler says. “We're gonna put on our jeans, go hear some pop stars do their thing, then drink a lot of beer.” The group faces a who's who list of metal legends in its category: Slayer, Megadeth, Ministry and Judas Priest. “I'd be happy to lose to any of them,” Adler says. “I wouldn't be doing what I'm doing without them.” One element these bands all share: the loyalty of metalheads.

“For us, it's been a real grass-roots slow climb,” he says. “No jumps, or sellout moments, or radio hits. I think we've kept a lot of loyalty that way. People trust us to do what we do.”

On the horizon: a three-disc anthology (early years, Epic years and rarities) to be released mid-June; and more world touring to places where the band is always surprised its music is known. It played Jakarta, Indonesia, last year, and will soon head to China, Singapore, Russia, India and South Africa. This time the band's bringing along a documentary film crew.

“There is no music commerce of any kind in some of these countries,” Adler says. “We wanna show that while the Internet is hurting bands in some ways, it's helping others see the world. Music brings people together regardless of how you get it.”