With his new Richmond exhibit, renowned architect and designer Michael Graves reflects on his long career and his approach to the field. 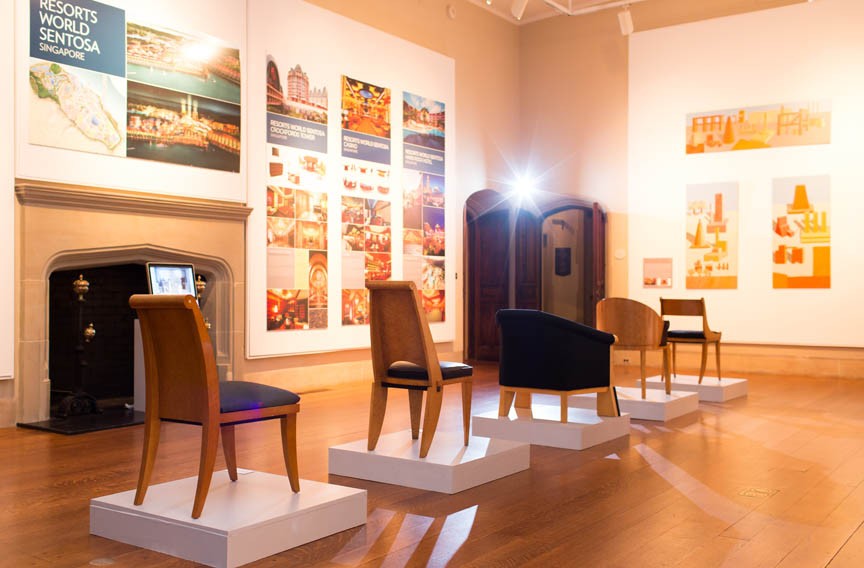 "Architecture is a calling," New Jersey-based architect and home-products designer Michael Graves tells some 300 people filling the chapel at First Baptist Church. "From the age of 8, I never had a doubt about I wanted to do."

Graves was in town Feb. 7 for a public conversation with architect Helene Combs Dreiling, director of the Virginia Center for Architecture. The chat was tied to the center's current exhibition, "From Towers to Teakettles: Michael Graves Architecture and Design." It includes photo panels of his major building projects internationally as well as examples of merchandise he's designed for such clients as Target, which has carried some 2,000 of his household products. In addition, there are a number of his handsome chairs, each of which shows Graves' penchant for creating a fresh and contemporary spin on classical forms. In 1998 the American Institute of Architects awarded him a gold medal, the country's highest architectural honor.

Graves tells the assembly that he's working with J.C. Penney to design in-store, stand-alone shops that eventually will have 500 objects with the Graves signature. "Whether it's [the design of] a kitchen or a city hall, it's all the same to me," he says. "Your reputation is out there. It has to be good."

Included in the exhibition, installed especially for the architecture center by the Graves firm, are panels showing Resorts World Sentosa, a recently completed 3.5 million-square-foot resort in Singapore, as well as regional projects such as the Museum of the Shenandoah in Winchester, the Wounded Warrior Home Project at Fort Belvoir. and the United States Courthouse in Washington. Perhaps he's best known as the designer of the temporary, electrified scaffolding that enveloped the Washington Monument during a restoration in 1999. He told his audience that first lady Hillary Clinton good-naturedly reproached him at the time: "Could you do something about the lighting so it won't keep Bill up at night? He has a view of it from his bedroom."

And what does he think of Richmond, someone asked. "I've only seen a snippet, but it seems very liveable to me."

Earlier that afternoon Graves spoke with Style Weekly at the Jefferson Hotel.

Style: Could you trace your evolution as an architect, as a designer?

Graves: After I'd been in school for seven years [the University of Cincinnati and Harvard Graduate School of Design] I thought I was an architect. But I didn't know what was behind it. I didn't know the sources. When I won the Prix de Rome I went to Italy for two years. It changed my life. I began looking at Palladio and work by a lot of other characters. Before that, one day in graduate school I'd been looking at images of the Paris Opera House [a highly ornate classical structure] when a professor came up and asked: "What's this, what are you doing? You won't need this at Harvard." Not only would they not teach [classicism], you weren't to learn it.

As a designer I was influenced by Saarinen, Charles and Ray Eames, Mies van der Rohe and Le Corbusier. They were all architects, but the all designed furniture.

At the American Academy in Rome there were 30 classicists. They said, "Michael, keep your mouth shut, because you're stupid." I started educating myself so I could join the conversation.

Much of your career has been as a teacher.

I wanted to teach so I could use the library. I wrote to all the schools I could. I started teaching at Princeton in 1962 and stayed for 39 years. It sounds ballsy, but there was a lot of dead wood [in the architecture program] and the president wanted changes made. Peter Eisenman, a Jersey boy, came for the same reason. Charles Gwaltmey came as a visiting critic. [They, along with Graves and Richard Meier, and John Hejduk comprised "The Whites," a group of Americans who were aligned with the modernist tenets of LeCorbusier].

But Eisenmann and I didn't like the glass boxes that were going up on Park and Madison avenues in New York City. We were against the inhumanity of the glass boxes. They all contained corporate offices and were ruining the sidewalks and shopping streets. I was looking for another language. Ultimately modernism gave us nothing we could experiment with. Richard Meier has continued to this day to do the same thing over and over. Peter Eisenmann, however, created his own language.

I was interested in painting, humanism and ideas that would bring the city back. A few big firms like SOM [Skidmore Owings and Merrill] were dominating the scene and I was determined to put an end to that.

You have known and been associated with many leading architects of the late-20th century. Which of them stand out?

Philip Johnson always wanted to be clever, au current. He wanted to know what was going on. He loved "the kids" [Johnson's term for a generation of architects that included Meier, Robert A.M. Stern, Frank Gehry]. Philip wasn't a great architect, but he was a good cheerleader. [He also was the architect in 1968 of the Childsavers building, formerly the WRVA-WRVQ radio building in Church Hill, at 22nd and East Grace streets]. I.M. Pei never gave anybody anything [a building by the Pei firm is nearing completion on the VCU Medical Center at 12th and East Marshall streets].

If your design veered from doctrinaire modernism, it's clear that the common denominator of your output, both architecturally and in product design, is a pure, Greek classicism. How did that come about?

On Sundays in Rome I'd go to the flea markets and find Greek and Etruscan pottery, often chipped. I started a collection of pots and have some 30 or 40 of them. They led to a way of doing things. I also traveled to Magna Graecia [the Greek Mediterranean world] expressly to see all of the works by LeCorbusier. I couldn't help but see all the ancient temples.

What do you think about the current state of architecture in the United States, how students are taught and the role of leading architects?

Have you seen the new school of architecture at Cooper Union [in New York by Los Angles-based Morphosis]? It doesn't have windows. What are they teaching the students? I recently told Thom Mayne [its principal architect] in front of 200 people, "I don't think you do architecture anymore." He replied: "I think you're right. We have nothing to talk about."

After such a storied career, what would you like to tackle that you haven't?

The next project. S