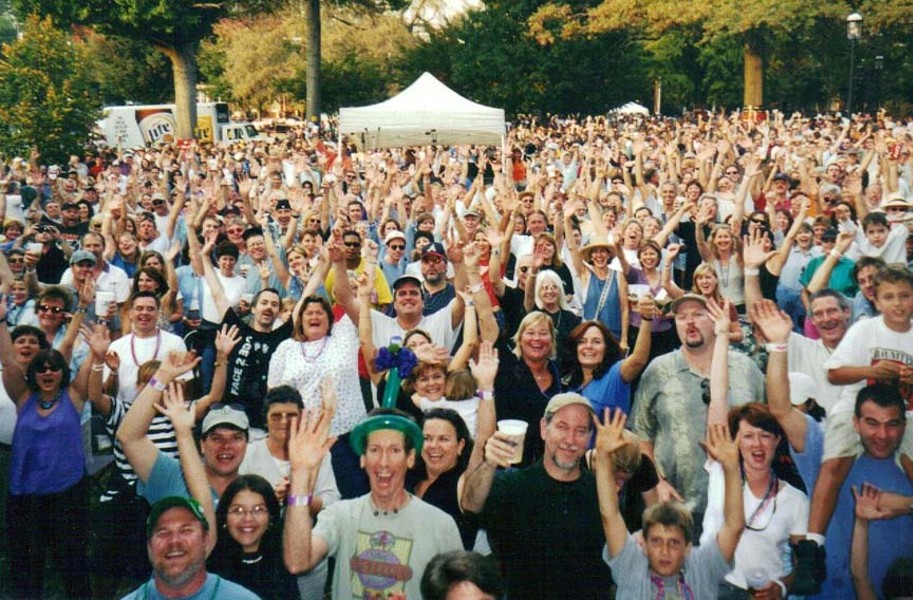 The stage was a flatbed trailer parked in a cobblestone alley in Church Hill. It faced the back of Chuck Wrenn's house. The audience spilled into adjacent backyards and wherever else it could. With no licenses to legitimize it, the fourth annual High on the Hog had the edgy cachet of Richmond's freewheeling warehouse parties of the '70s.

On Oct. 11, 1980, Richmond didn't allow large outdoor events combining properly amplified rock 'n' roll music and alcohol consumption, especially on public property. When the Megatonz opened the show, to think the cops would come eventually made sense — which probably encouraged the crowd's collective desire to live in the moment.

Instead, a chilly rain came while the second band, Don' Ax Me ... Bitch, was performing.
Rather than wait out the downpour, Wrenn, the irrepressible impresario, broke out large rolls of heavy-gauge transparent plastic. Armed with staple guns, he and volunteer assistants assembled an awning to keep the rain off the equipment and musicians. The audience followed suit by unrolling more plastic, standing underneath while it was held overhead. Those dancing in the mud felt the power of rock 'n' roll to simultaneously express lamentation and celebration. With electric guitars of wailing in defiance of the rainstorm, the sense of solidarity felt by those baby boomers was the stuff of legends.

The rain subsided. The Memphis Rockabilly Band finished the show. No real trouble from the cops appeared. It was a charmed afternoon.

The series of High on the Hog parties began in 1977 as a small, pork-themed gathering of neighborhood friends. No electric guitars. In the years that followed the event took on a life of its own. Along with Wrenn, those on the team organizing three decades of parties were John Cochran, Larry Ham, Bobby Long, Steve McKay, Dave O'Kelly and Randy Smith. In 1983 that group stuck a deal with city authorities and went legit.

The transformation allowed the stage and festivities for High on the Hog 7 to move into Libby Hill Park. On the bill were the Bop Cats, New Victims of Love, Evan Johns and the H-Bombs and Billy Price and the Keystone Rhythm Band. The turnout was huge, and the untainted success of the event paved the way for a new era. It allowed for Jumpin' in July, Friday Cheers and the countless beer-truck-in-the-street and music festivals that followed.

In High on the Hog's peak years, it took some 350 volunteers to chop the pork, serve the beer, tend the stage. The Silver Stars, a beloved gospel group, set the record for most appearances with 10. While space doesn't allow for the complete list, here are some of the other acts that graced the stage in the park:

A Nor'easter drenched Richmond on Oct. 7, 2006. In the torrent the massive sound system couldn't be erected. Two scheduled acts couldn't perform in the conditions. Nonetheless, Lindy Fralin volunteered a scaled-down sound system. Tarps were lashed to the stage to block the wind-driven rain. The Bop Cats went on for a handful of dauntless regulars in front of the stage. Unfortunately, without the expected income from food and beer sales, the backers' rainy day fund was sopped up. Thus, High on the Hog 30 closed the book on a generation's gold standard for Woodstock-inspired parties.

The Memphis Rockabilly Band, fronted by the late Jeff Spencer, finished the show. Its encore was Link Wray's "Run Chicken Run," with Bill Coover playing lead guitar for one last dance, with umbrellas, in the mud.