Is it time to rein in megachurches? 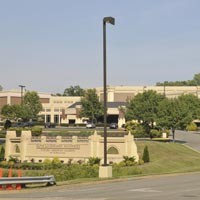 Despite its convenience-store-like operating hours, as a house of God, Faith Landmarks Ministries isn't too far removed from Chamberlayne Heights United Methodist Church, a much smaller house of worship located on the same brief stretch of Chamberlayne Road in Henrico County's North Side.
God lives in both of these houses, but while he may stop by the 300-member Chamberlayne Heights United Methodist on Sunday morning for the sermon and on Wednesday night for Bible study, at the 8,000-member Faith Landmarks he also shops for books and CDs, grabs a latte at the coffee shop, graduates from high school, attends rock concerts and counts money in the church's state-of-the-art business offices.
Both churches are close neighbors to each other as well as the subdivisions that line this stretch of highway between Richmond and Hanover County.

But each has a very different impact on Henrico County. While the smaller Methodist church goes largely unnoticed, Faith Landmarks has had to work hard to make sure its rapid growth doesn't strain its relationship with neighbors and county planners.

The megachurch concept is nothing new to American society, where bigger always seems better. But as more churches expand their ministries beyond the Sunday-morning service and the restrictive confines of the modest pew-lined sanctuary, the line between nonprofit church and unregulated enterprise is blurring.

"People are used to thinking a church happens on Sunday morning," says Angela Galante, business manager at Faith Landmarks for 15 of the 18 years she's been with the church. "Most churches in America are small. If they do anything on a weekday, it might be a day care. When you start talking about what is commonly known today as the megachurch, our building basically runs from 7 in the morning to 11 at night, seven days a week. We're busy all the time. It's a different environment."

In many respects, Faith Landmarks is fortunate that its founders picked a major highway in a fairly rural setting back in the mid-1980s when the church broke ground. Even with acres of land around them, Galante says, church leaders have walked a careful line to ensure their facility's swift growth hasn't worn out its welcome with neighbors.

"Being a home-owner, I understand their concerns -- everything is encroaching around them," Galante says of the surrounding community, noting Faith Landmarks' work to ease those concerns by turning off lights in the parking lot before 9 p.m., and by leaving plenty of greenery between the church and nearby homes. Open lines of communication with neighbors have been important, she says: "We opened our big addition here in 2001. In all of those years, we may have had one or two complaints."

But concerns still exist in the eyes of county planners when they consider megachurches and their placement in the communities they serve.
"In Chesterfield you can build churches anywhere but in industrial [areas] and mobile home parks," says that county's director of planning, Kirk Turner. That means if the church owns the land, it can build without the locality having anything but the most basic input in the process. "Everything else is fair game as long as they can meet the bulk requirements of the ordinance: setbacks, height requirements, et cetera."

The same is true in Henrico County, and anywhere else that conforms to the basic principle that churches are sacrosanct; they should be protected from restrictions meant to restrain earthly expansion. Zoning laws that protect religious institutions from restrictive and expensive county requirements never conceived of churches that rival Wal-Mart in terms of both size and the variety of products they offer inside.

When a simple neighborhood chapel goes mega, however, it doesn't always sit so well with the neighbors. Just ask residents of Spottswood Park subdivision in Henrico's West End, where a proposed 46,000-square-foot addition to Third Presbyterian will double the church's size, stretching its walls to the perimeters of the 3.3 acres it inhabits along Forest Avenue.

"It all has to do with separation of church and state," says Miriam Tice, one of several nearby homeowners who have voiced concerns that the church's late-night activities, new parking-lot lighting and expanded operations will have a negative effect on the neighborhood. "It would be easier, really, to have an office building that's 46,000 square feet across from you. To have a building that's in use so many hours of the day and to have a playground it's just disappointing."

Attempts to communicate those concerns to church leaders, Tice says, have not been successful. Style Weekly's repeated attempts to talk with church leaders also were unsuccessful. Last week, the Henrico Planning Commission approved the church's proposed plan to grow the facility to nearly 100,000 square feet, sending the measure to the Board of Supervisors.

As for her vote on the matter, Supervisor Pat O'Bannon isn't commenting. But the issues highlighted by the neighborhood conflict are universal, she says, and may well call for a review. She sees the clash between Third Presbyterian and its neighbors as preventable if counties were to get real about extending to churches restrictions that already apply to businesses engaged in the same nonchurch activities.

"I've been trying to get the Board [of Supervisors] interested in talking about review of parking for places like churches," O'Bannon says. "Times have changed. Churches have events going on all the time, not just on Sundays. This is a good thing -- I like having religious facilities that are active -- but when you have two or three events going on, we need to start looking at parking for more than just the fixed pews."

A previous attempt to start that discussion in Henrico several years ago ended in a long silence, O'Bannon says. And it's unlikely that trying to restart that conversation will come to anything different if Chesterfield's experiences are instructive.

"About 20 years ago, Chesterfield proposed tightening the regulation of churches and where they could locate," Turner says. "Folks showed up by the bus load -- and I'm sincere, there were buses showing up for the public hearing. The Board of Supervisors quietly dropped the issue and it's never been considered again.

"My sense is there's no political desire to address the issue," he says, noting that polite dialogue remains the only tool available to county planners. "You can't solve all problems for everybody, so it's just one of those things we live with."

County officials are missing the boat, suggests Aubrey Fountain, a land-use lawyer and adjunct professor at Virginia Commonwealth University.
"You shouldn't be able to be a church and do whatever you want," Fountain says, suggesting that zoning laws need to be amended to allow boards and commissions to regulate what uses are acceptable for a church in a residential area.

"It's always been one of those don't necessarily have to be congregation members to use the coffee shop," he says, adding that changing traffic patterns can impose "a threat on the quiet enjoyment of the neighborhood."

Often, he says, megachurches outgrow and extend beyond bright-line religious uses and therefore the zoning restrictions.
It was then-Supervisor Joan Girone who initially proposed the church restrictions in Chesterfield, responding to a house of worship with an unfortunately placed parking lot that left car lights aimed at adjacent houses.

Since that disappointing turnout two decades ago, Girone says, the encroachment of megachurches on residential areas has only accelerated. "There's one out here in Chesterfield that has a skateboard park," she says. "It's open to the public. They charge the kids to go there. This is a big issue."
"A church is a church is a church," Girone says. "But should it be -- as far as zoning and tax exempt [status] goes? Is the skateboard park a church? Is the coffee shop?" S