Along a strip-malled stretch of West Broad Street stands a microcosm of the South's diversity explosion. 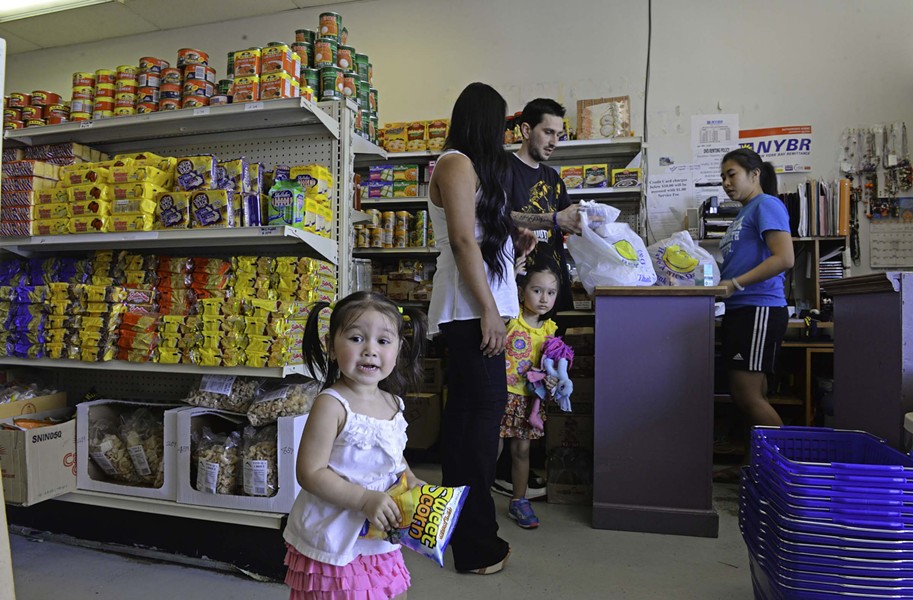 Scott Elmquist Kriss Xanthosoma Fat of the Tindahan Filipino Market assists the Painter family of Richmond. The Tuckernuck Square market on West Broad Street reflects some of the increasing racial and ethnic diversity in the metro area. Tindahan sits next to a Chinese takeout place next to a European deli in a strip mall with Indian, Greek and Japanese food.

In the Henrico County strip mall where the Chinese woman owns the Japanese steakhouse and sushi bar and the Turkish man runs a Greek place alongside his Costa Rican wife, the Afghans came and went in a blink of the eye. But their restaurant and market space didn’t stay vacant long.

“We’ve been here about a year,” says Mohammed Irfan Ali, who moved his Bawarchi Indian restaurant between the Japanese restaurant and the Filipino market.

“That is this place,” says Shui Lin, Chinese-born manager of the Chinese takeout place, which is next door to European deli where she likes to buy cake. “Asian, Latino, it’s all mixing up. It’s international.”

So is written a new story of the South. Or, as demographer William Frey calls it: the New Sunbelt. Richmond squarely sits in this belt alongside other Southern cities now seeing what he calls “a diversity explosion” in the country.

It’s the story in which black and white give ground to Asian and Latino. In this New Sunbelt, which includes Virginia, nearly one of five residents are what Frey calls “new minorities” — Latino, Asian and multiracial. Between 2000 and 2010, that population grew by 68 percent.

Some people call this tale of immigration, migration, and rising and falling birth rates an emerging story. But it’s been emerging for a couple of decades now and has just been picking up steam. Ask any public school teacher. Students learning the English language in Henrico County now represent 81 different languages. In Richmond, the number of English-language learners has risen from 5 percent of the student body to 10 percent since 2000.

The Richmond area is still predominately white and black, but you can find census tracts around this strip-malled stretch of West Broad Street where more than one-third of the population speaks a language other than English at home. 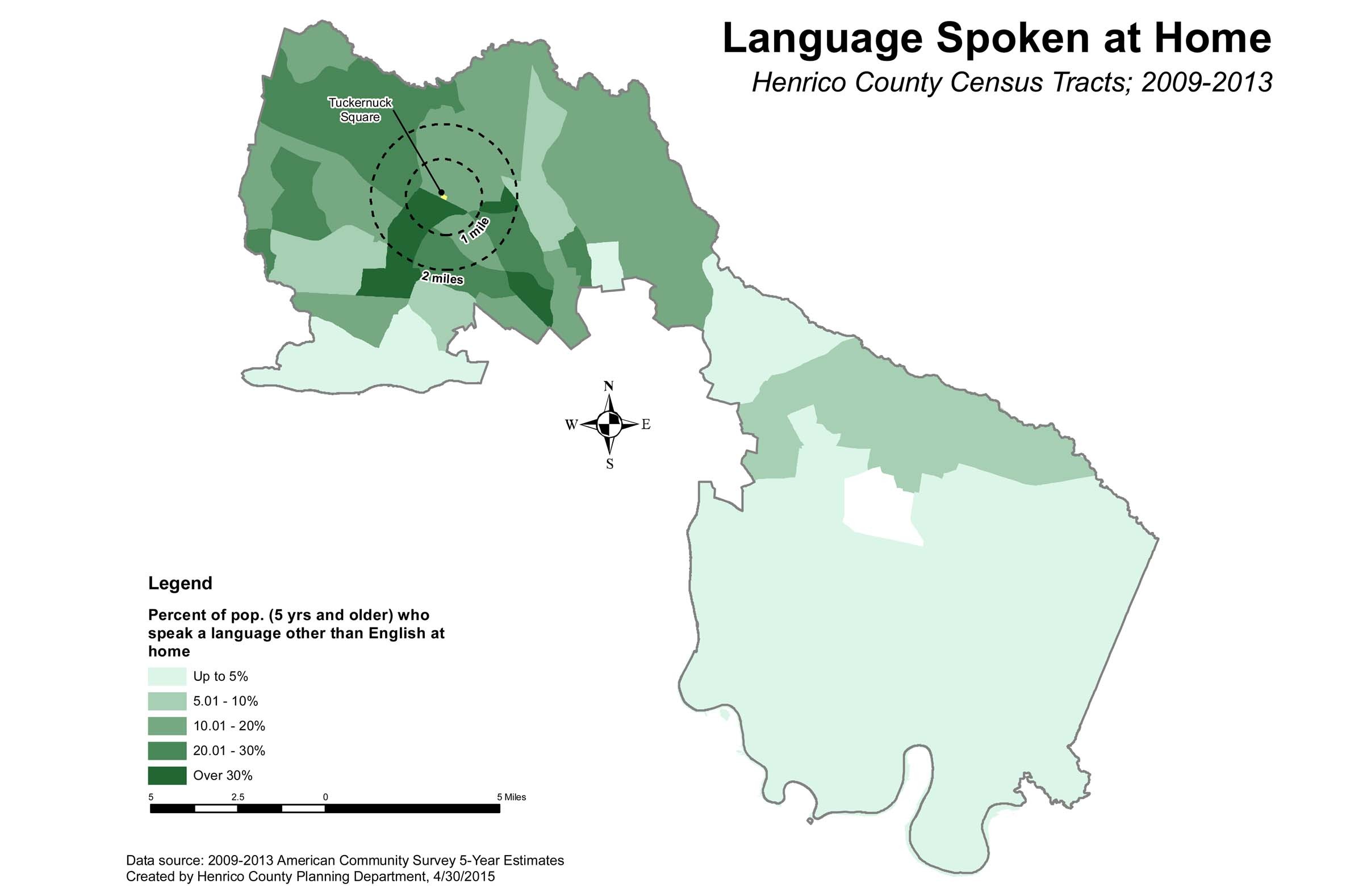 In this landscape, the lowly strip mall is the unheralded signpost of cultural change. Ubiquitous, ever the architectural underachiever, strip malls rarely get the credit they deserve as portals to other cultures, the humble shelters of side-by-side universes or for what they really are: down payments on the American dream.

So sure, this mall, Tuckernuck Square, may be anchored by that cacophonous purgatory of birthday pizza parties, Chuck E. Cheese. But next door, at the Royal European deli, it’s possible to buy mayonnaise from the Ukraine.

“It tastes quite different from American. I suggest you buy some,” says Maria Newby, born in the Ukraine and in Richmond since 2005, who’s shopping with her mother.

And corned beef from the Philippines. “Not at all like American corned beef,” says Mila Fat, owner of Tindahan Filipino market.

And Biryani rice from the aforementioned Mr. Ali, who hails from Hyderabad city, renowned for its version of the rice dish.

Cross the threshold and step into a place where people speak Russian or Tagalog or Mandarin or Telugu or Urdu or Spanish. Where fat sacks of rice sit on the floor and the air smells like coriander and turmeric, where the refrigerators are stocked with Lithuanian cottage cheese and the buffet with Filipino pancit.

The ethnic markets sprouting up in strip malls have become vital places in immigrant communities, particularly to newcomers still adapting to a new way of life.

“Sometimes people call me and say: ‘Tania, it’s Sunday and I need a dentist. What do I do?’ Or: ‘Tania, I need a babysitter. I need a locksmith. Can you help?’ I am happy to help,” says Tania Nikolayeva, the Ukranian owner of the Royal European Deli.

On a recent weekend, a Filipino brother and sister drove in from Chester to celebrate the brother’s birthday with lunch at Tindahan. One of the brother’s Vietnamese coworkers told him about the market a few months ago, and he and his sister decided to check it out.

“We went straight to the back where the hot food is and went, ‘Oh my God,’” he says, “and just stocked up.”

Their Filipino father was a three-time war veteran and he ended up stationed at Fort Lee in Petersburg. They’ve lived here long enough that the Old South crept into the sister’s accent, softening it, stretching out the vowels.

“A place like this for us is about our heritage,’ she says. “No matter how long we have lived here. No matter what our accents are.”

Their parents named her Susanna. She is now Susanna Aquino McDonald. But their father named her brother Filmer Aquino. On this Sunday at a strip mall sitting on the lip of a demographic wave in the New Sunbelt, it couldn’t be more perfect. Filmer. That’s Fil for Filipino. Mer for America.

“You can just call me Fil,” Aquino says, and they go inside to eat. 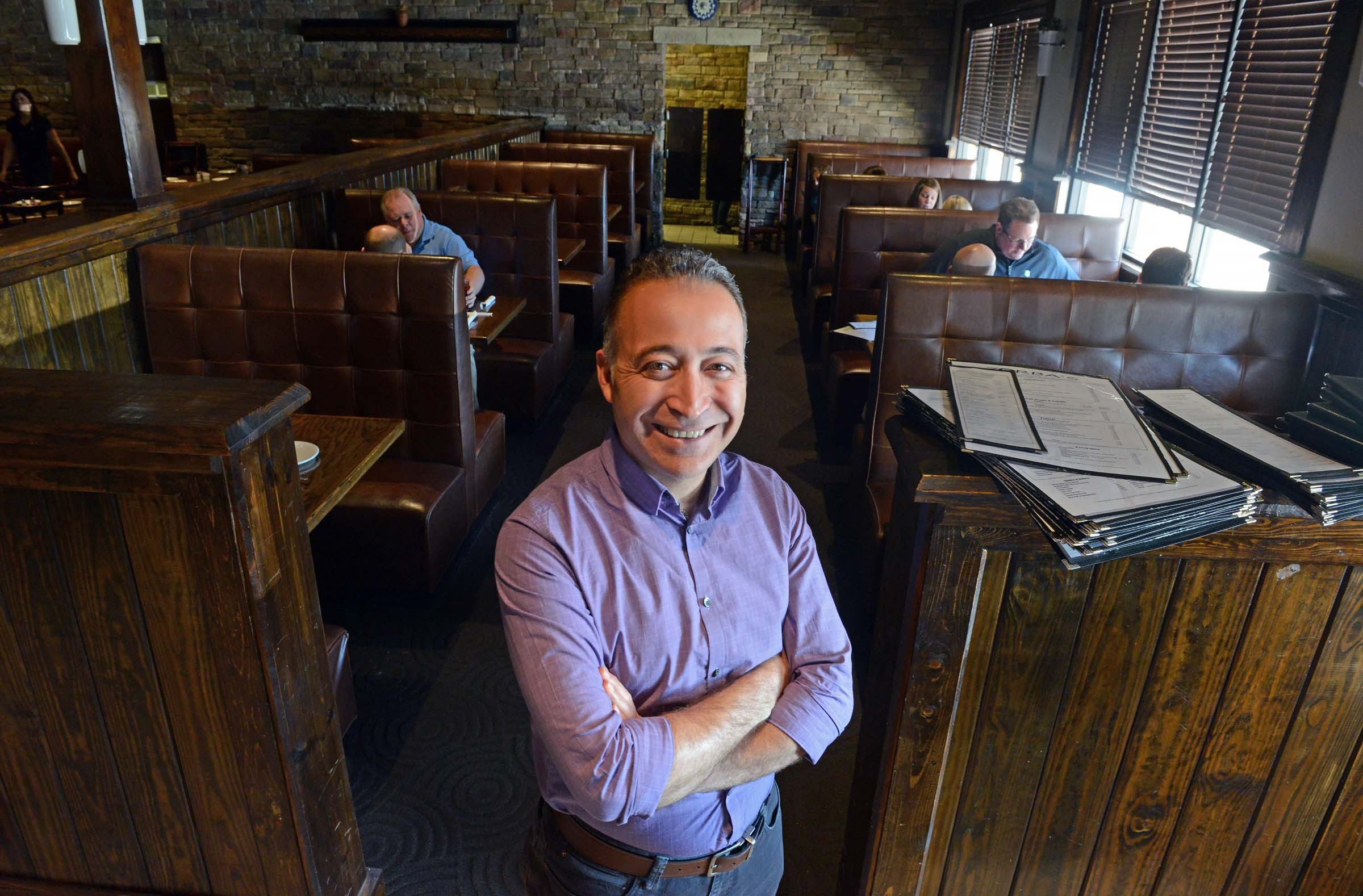 At the time, it was totally different. Every one and each one here is different. There was one business as old as me and that was a dry-cleaning Korean couple but they left about a year ago.

In this strip mall, we were the only ethnic food, but we also had burgers and salads and mainly family-style dining. Now in this mall there is Japanese, Indian, the Filipino market, the European deli, but they are not that old. The Indian place has changed twice already. I wish them the best. The Chinese takeout place is on the second or third owner that I know. Sakura is not that old, about six years. It used to be Video 2000. It was the hottest place.

I was born and raised in Istanbul. It’s one of the largest cities in the world. I lived with my family and my brother in the same 900-square-foot apartment all my life. I shared a room with my brother all my life.

I graduated from the merchant marine academy in 1990 and Richmond is my first land that I have stepped on in U.S. soil. That was in 1989, October. I was a cadet in the Turkish Maritime Academy and later I brought tobacco from Turkey to Philip Morris. It’s interesting, yes?

I moved to the U.S. in 1992, July. I was 22. My plan was to study and then the plan changed. I had to work rather than study and I met Isabel, my wife, that kind of thing. My wife was born and raised in Costa Rica. She was the first Costa Rican person I ever met in my life. I bet I was the first Turkish person she ever met in her life, too. You would have to confirm that with her, of course.

My wife loves to cook and she was working at Zorba’s for the two Greek brothers who opened it in 1991. She always had a dream of owning a restaurant and when the brothers decided to sell, we purchased it in 1998. We have many regulars who have been coming here for years. You can call this maybe Cheers of West End. It is like a family-style Cheers. Not much drinking, but a lot of talking and gossiping.

The demographic of this neighborhood, from Parham Road to Gaskins, it’s changed dramatically in the last five years and I can see every second of it. Back then in the early 2000s, it was all white Americans. Now, good-paid Latinos and Asians are coming in. A lot of African-Americans are coming in. They have good jobs and are looking for good school districts for their kids.

Back then we did not have Short Pump. Short Pump was a cow pasture. We used to be West End here. I don’t know what we are now. Downtown West End? Near West End?

The change, it’s like day and night, I tell you. I couldn’t even adjust that fast.