A demanding medium meets its master in Dale Chihuly. 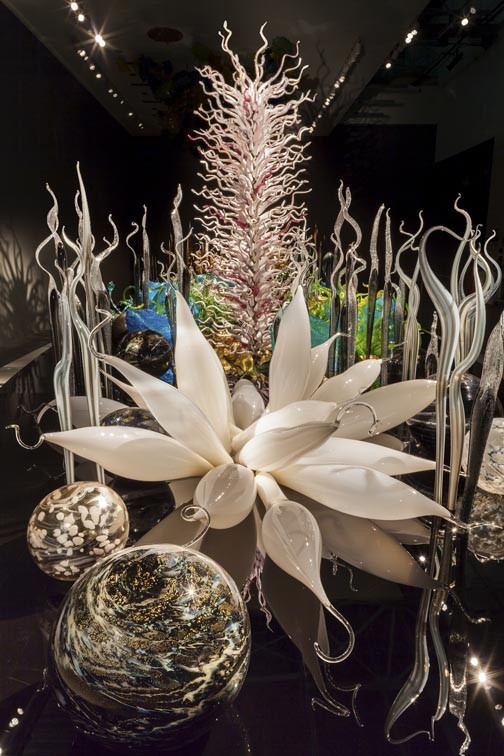 Glass artist Dale Chihuly's work is so massively intricate, you picture him and his team of artists locked in laborious, painstaking work. It is; but, he says, it's also a race against time.

"When you've got hot glass — an organic medium — and gravity is pulling on it, you've got to be fast," Chihuly says. "I had to learn to manipulate it quickly, working against gravity but also learning to work with it."

Chihuly's work is notable for the size of his installations, his range of colors from astonishingly brilliant to subtle, and the emotional impact he makes on even casual viewers. Yet a half-century ago, his work wouldn't have been considered fine art.

That's when the art world gave birth to the term studio glass, at a time when creative glass work was still considered a craft. In the late 1960s, Chihuly championed the medium as a sculptural vehicle after studying in the nation's first glass program, at the University of Wisconsin. He continued his studies at the Rhode Island School of Design, where he later established the glass program, and went on to a Fulbright Fellowship in Italy, where he worked at the Venini factory in Venice. His career has paralleled and revolutionized the studio glass movement — 50 years old this year — and his name has become synonymous with it.

In the 12,000 square feet of space devoted to Chihuly's new show at the Virginia Museum of Fine Arts, visitors witness a convergence of innovative glass creation. The Richmond exhibition pairs his intricate, 3,000-pound "Blue Ridge Chandelier" — hung last month — and Tiffany's "Christ Resurrection Window," created more than 100 years ago. (When that window was recently installed in the museum's new McGlothlin Wing, it was also the first time in more than 50 years that it had been on public view.) Tiffany's windows inspired Chihuly in the creation of his chandelier, which is constructed from 1,151 hand-blown glass elements.

Recognized for his ambitious architectural installations around the world, Chihuly also has been innovative in gathering artists of all media and encouraging them to approach materials in unorthodox ways. Once he and his team of 20 complete the sculptures in Seattle and Tacoma in Washington, other employees see to the photography and packaging of the pieces for proper installation on site.

Imagine re-laying more than a thousand pieces of the packaged "Persian Ceiling" when they arrived at the VMFA. Walking under this piece makes a visitor feel like royalty — or at least an honored guest. Chihuly's "Laguna Torcello" is unique to the Richmond exhibition and a departure for the artist.

The exhibition puts Richmond in good company. Chihuly has created glass sculptures in Finland, Ireland and Mexico, and installed them over the canals and piazzas of Venice. In 1999, more than a million visitors saw his challenging exhibition at Jerusalem's Tower of David Museum.

His lifelong fascination with greenhouses has led to a series of exhibitions within botanical settings — in Chicago, London, San Francisco and Seattle — as well as the outdoor installation, in August, of "Red Reeds" in the Virginia Museum's reflecting pool. More than 60 feet long, the work features 199 reeds flowing upward as much as 10 feet, interspersed among the aquatic foliage.

"Certain things remain the same," Chihuly says. "Sizes vary, but I'm interested in outdoor projects where landscape may be a point of departure." He has said his favorite project is always "the next one" — and after a spectacular installation, Richmond will be waiting to see what's next. S