German Gorillas and Slovakian Wolverines: Meet the Cycling Stars that Are Coming to Richmond 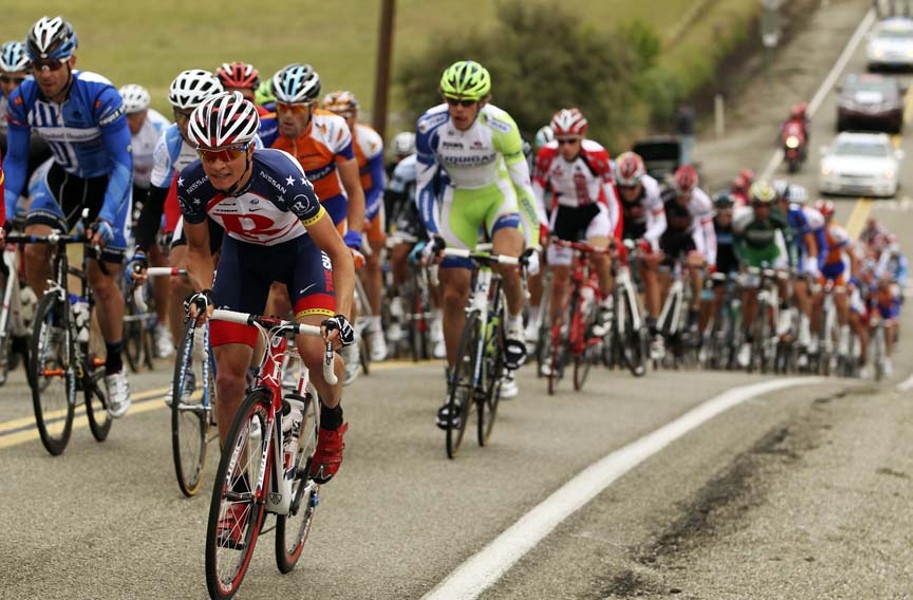 Reuters/Anthony Bolante During the Amgen Tour of California in 2011, U.S. time-trial champion Ben King, a Richmond native (front), climbs hard in the mountains of San Jose County. He’ll be a local favorite to watch next week.

The UCI Road World Championships take place at the end of a busy cycling season, following behind the heavily contended Grand Tours and Classics races.

Originally organized for amateur cyclists, the Road Championship was opened to professionals in 1927, and later became the final part of cycling’s highest achievement, the triple crown. Such a feat consists of victories at two grand tours — the Tour de France and the Giro d’Italia — followed by the last race of the season, the one hitting Richmond.

Only two cyclists have ever earned this honor: the legendary Eddy Merckx, of Belgium, and Stephen Roche, of Ireland.

Chris Froome, the British champion who won his second Tour de France this year, hoped to achieve an alternative triple crown, consisting of La Vuelta Espana and the World Championship. But he broke his foot in a crash and was forced to abandon the Spanish grand tour — and Richmond.

While it’s rare to see grand tour winners also win the World Championship, this race won’t be filled with “the best of the rest.” The best racers in the world will be in town, fighting for a spot on the podium.

Richmond’s courses will favor versatile sprinters who can handle rough terrain, climbs, and bursts of speed in excess of 40 mph. Sprinters tend to be led out by teammates who provide a draft and bring them up to the final stretch before they expend the last of their energy in a solo race for the finish line.
To appreciate the drama behind the races, here are the cyclists you need to know:

The U.S. team enters Richmond with a small contingency, but makes up for it with local knowledge and fighting spirit. Richmond native and Virginia Tech alumnus Ben King won the U.S. Road Championship in 2010, and will be riding as a super-domestique for teammates Taylor Phinney, Brent Bookwalter and Tyler Farrar. The three have had strong form through the past weeks, but are considered long shots for victory.

Belgian riders are known for their grace and power over rough terrain, and three of their best will be in top form for Richmond. Greg Van Avermaet, a photogenic youngster, has had a solid season, winning a stage in le Tour ahead of the determined Slovakian Peter Sagan.

Tom Boonen, the oldest of the three, is a male sports idol in Belgium, where his good looks, personality and strong racing record has kept him popular despite some controversy around recreational drug use. He has focused most of this season on winning in Richmond, and is expected to be a strong contender.

The third leader, Philippe Gilbert, is another strong rider with a history of victory. He won the championship in 2012, but a leg fracture earlier this year kept him from the Tour de France. Having three strong contenders may be a weakness for Belgium if the three can’t agree on who will lead the squad to victory.

The course profile doesn’t favor sprinter Mark Cavendish, who usually wins on flat, straight courses. Cavendish, known as the Manx Missile for his incredible top speed of 49 mph, made headlines earlier this year when Richmond organizers let him pre-ride the course with a police escort. Fresh from victory in the Tour of California, Cavendish said he was confident about his chances in Richmond. Editor's note: Cavendish has withdrawn from the race since this story published.

But his biggest asset, loyal lead-out man Mark Renshaw, will be his greatest weakness in Richmond. The UCI World Championship teams are national, not corporate sponsored, and Renshaw, an Australian, won’t be riding to support Cavendish.

Cavendish will face tough competition from German sprinter John Degenkolb, a versatile rider who handles climbs better than other pure sprinters, and his countryman, Andre “The Gorilla” Greipel. He’s another powerful sprinter who got the best of Cavendish in the Tour de France sprints this year. But the big German has never climbed well, and he couldn’t pass Cavendish on the opening sprint of the recent Tour of Britain. Greipel is one of the larger sprinters at 6-foot-1, and his size — an asset on level finishes — will slow him down on the cobblestone climbs before the sprint line.

Peter Sagan is a puckish rider from Slovakia, known as the Wolverine for his distinctive hair and brave racing style. He’s a fan favorite who pops wheelies after winning stages. Sagan is that rare sprinter who can win on a climb or varied terrain, and he rarely has a designated lead-out, choosing to attack early or draft behind his rivals as a freelancer.

Sagan distinguished himself in his first Tour de France in 2012 by winning a green jersey for the most consistent rider. He’s won that competition every year since. He’s officially a sprinter, but Sagan is young and versatile, and could excel at any aspect of the sport, from climbing to time trialing.

Sagan was expected to win the consistent rider competition in La Vuelta Espana in August, but was hit by an official’s motorbike, and had to abandon the race because of road rash and other injuries he sustained. If he’s recovered, he’ll be a likely victor in Richmond.

Michael Kwiatkowski is the champion of Poland, a remarkable all-rounder who won the Road Championship last year. He’s had a rough season, and fatigue and exhaustion had him abandon Le Tour de France on stage 17, which coincided with the official announcement that he’d be leaving his current cycling team at the end of the season. Kwiatkowski is a young racer with a strong future ahead, but he is an unlikely candidate for victory in Richmond.

Kristin Armstrong, an Olympic gold medalist and cycling champion, left retirement to win a fourth U.S. Time Trial Championship earlier this year. She’s a strong favorite for the time trial competition in Richmond, where solo riders attempt to complete a course with the fastest time.

Lizzie Armistead started her season focused on victory at the UCI Worlds. She won the World Champion Cup in 2014, and leads again in 2015, making her a strong contender for Richmond. A victory here would secure a second UCI Cup for the British champion. Armistead entered road cycling as a dominant track racer, having won five medals on the track in 2009 and 2010.

Editor's note: This story has been corrected from the print version to reflect that Peter Sagan won his first Tour de France in 2012, not 2011. Also, Mark Cavendish is from Isle of Manx.