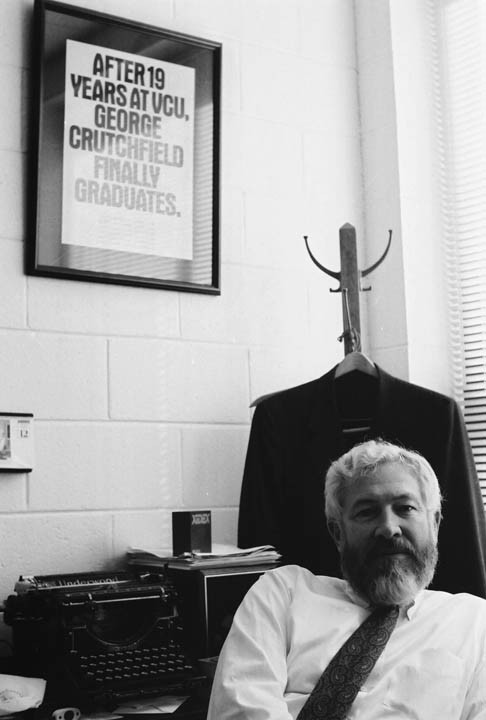 For Lana Bortolot, the greatest lesson she may have learned from Virginia Commonwealth University journalism professor George Crutchfield came when he assigned her the curious mission of writing an 800-word essay about one of his favorite words, "penultimate."

"I took the assignment too seriously, and when reading it aloud in class, looked up to see Mr. C choked up with tears — not from emotion, but from holding his laughter," Bortolot, a freelance writer for The Wall Street Journal, recalls with chagrin. "The overly self-conscious writer in me failed to see that I had actually written a very funny piece on a very silly topic. I'm pretty sure this was his way of telling me to lighten up. He had a great sense of humor, as well as humanity, which, as he taught me, will always hold up when everything else falls apart."

Crutchfield, longtime director of the university's school of mass communications, died at age 77 on March 15. He battled heart problems for decades. Paternalistic and eternally cheerful, Crutchfield was a demanding but encouraging journalism professor with boundless love for his students, the English language and accurate reporting. "If your mother says she loves you, check it out" was the frequent and humorous mantra he drilled into the psyches of thousands of aspiring young journalists.

When Crutchfield took over as head of VCU's journalism program in 1970, it had just 24 students, all learning to become newspaper writers and editors. He stepped down as director in 1989 because of health problems but continued to teach journalism classes and mentor and recruit students. By the time he retired in 1999, the school's enrollment had swelled to more than 800 students, representing such wide-ranging fields of study as print, broadcasting, advertising and public relations.

"George had a marvelous ability to cultivate people and support for the program and he was very, very much due the credit for the eventual growth of the program to what it became," says Jack Hunter, the founder of the school and Crutchfield's predecessor.

An indefatigable volunteer, Crutchfield donated time and money to many organizations, including his beloved Boy Scouts of America (Crutchfield's e-mail address prefix was "oldscouts," presumably an homage to MacArthur's line about old soldiers never dying), as well as the Society for Professional Journalists and the Virginia Press Association. In December, he and his wife, Frances, served as Powhatan County Christmas father and Christmas mother. It was an appropriate role for Crutchfield, whose white beard, mischievous grin and twinkling eyes easily could have been mistaken for those of old St. Nick.

During his tenure at VCU, Crutchfield founded VCU's Virginia Communications Hall of Fame, which has honored dozens of leading media practitioners in Virginia, as well as native Virginia luminaries such as Roger Mudd, Willard Scott and Tom Wolfe. Crutchfield himself was inducted into the hall in 1990. (He received the Virginia Press Association's lifetime achievement award in 2009.)

Additionally, Crutchfield co-founded the school's Virginius Dabney Distinguished professorship for visiting lecturers and was instrumental in bringing famed newspaper columnist, grammarian and "60 Minutes" commentator James J. Kilpatrick to teach for a semester at VCU in 1994. It was the only class ever taught by Kilpatrick, who died last year.

"George was a real journalism giant in that he was really a wordsmith, and he wanted to make certain that students understood the importance of the language in journalism and the accuracy of their reporting," says retired VCU journalism professor Wilma Wirt, who worked closely with Crutchfield. "He absolutely loved [journalism] and he loved young people."

Another Crutchfield protégé, Melanie Irvin, VCU's director of development and alumni communications and a former Richmond Times-Dispatch editor, recounts how she hoped Crutchfield would send her to intern at the prestigious Palm Beach Post after she landed a Dow Jones editing internship under his aegis. Instead, Crutchfield dispatched her to the much smaller Pottsville, Penn., Republican newspaper — where Irvin could make a much bigger splash. "After I week, I was the [front-page] editor, definitely an experience I couldn't have had anywhere else," she says. Crutchfield "was always concerned with getting it right — either in the newspaper or in how others were treated."

"Crutchfield imbued me with this notion that journalism was noble," Cooksey says. He taught that "editors and writers ought to think of themselves as seekers and defenders of exactitude in both fact and language. ... Crutchfield had preached to me the notion of the copy editor as the last line of defense. ... Crutch taught me to strive for the ideal." S