The Furniture Life: A talented craftsman talks about his life’s work and the demographics of today’s furniture buyers 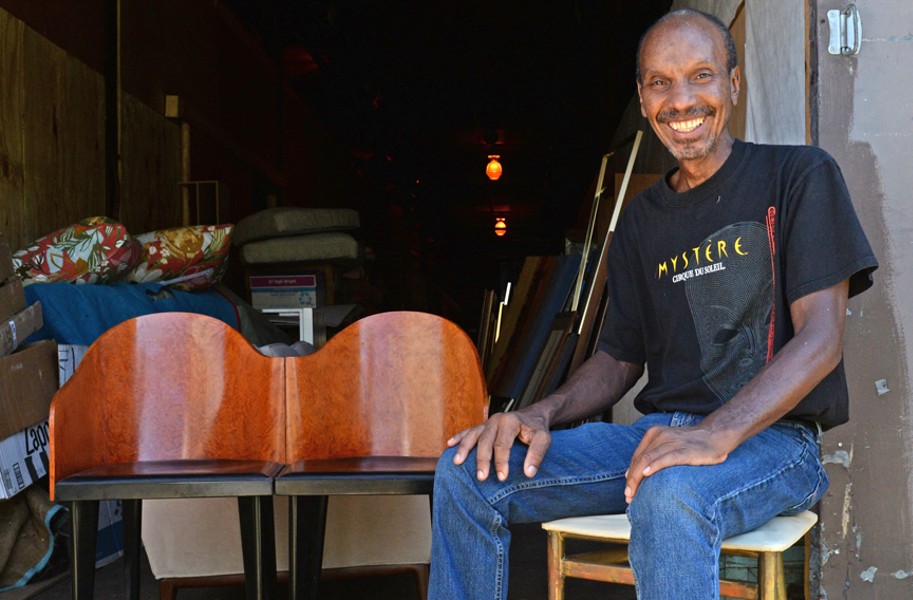 In 1982, Maurice Beane made his first coffee table by combining a thick slab of marble with a distinctive broken edge supported by four terra cotta chimney flues painted black.

The monumental piece immediately got noticed and he was soon getting commissions for other tables. By 1986, he'd been asked by the Richmond Arts Council to demonstrate work at the summer music event, June Jubilee, then at its peak in popularity and drawing thousands downtown every week. "There was a $200 honorarium for participating and [that] was a lot of money in 1986," Beane says from his overflowing warehouse.

The president of the board of the Hand Workshop — the predecessor to the Visual Arts Center — saw Beane at June Jubilee and was so enamored of a chair with a red granite seat and an enamel gray finish that she bought it for her husband as a Father's Day gift.

"That was my introduction to the Hand Workshop," Beane says, adding that within a year he was able to leave his job as a furniture salesman at Miller and Rhoads. "Back then, between the creative side of it and the newness of it, I thought the world was my oyster."

Inspired by the Lewis collection at the Virginia Museum of Fine Arts and the Memphis Group, an Italian design and architecture group that took inspiration from art deco and pop art, he began crafting architectural metal such as gates and railings and making furniture and accessories of marble, granite and sand-blasted glass. "My work was much more avant-garde then," he recalls.

Beginning in 1988, he showed his furniture at the annual Richmond Craft and Design Show, winning awards nearly every year. Offered a five-year contract to design pieces for the prestigious Harold Zimmerman Collection, his first grouping was extremely well-received and he began getting local, national and intentional attention for his work. Around the same time, Beane began collecting art deco-influenced ceramics and furniture for himself, inspiring a sideline business of selling vintage furniture.

Not bad for a Virginia Commonwealth University communication arts and graphic design major who grew up in Reedville on the Northern Neck. "Along the way, I met people I needed to meet, which allowed me to make my living doing this for 31 years," he says.

Beane remembers 1988 through 1990 as the best years he ever had in terms of his hand-crafted work. But it came at a cost. "I was working 110 hours a week. Do enough of those and they'll kill you," he jokes. "But even now, I'm spending 85 hours a week typically."

During the late '90s and early aughts, Beane found an outlet for his furniture collecting habit as part of the upscale flea at the revitalized 17th Street Farmers Market. His interest in collecting midcentury modern furniture, scouring antique shows along the East Coast, was born less from his own tastes than the changing tastes of consumers evident at flea markets.

What he gleaned there was that younger people didn't want the stuff he'd made in the '80s, but they ate up old Ikea furniture on the secondary market. His conclusion was that with an older clientele, their homes were already full. "This year, the youngest client I made something for was 54 and the oldest turned 93," he explains. "That's my clientele. A lot of them I first met in the '80s when they were in their 30s and 40s and they've stuck with me since."

When it comes to reaching millennials and post-millennials, though, he's discovered midcentury finds speak loud and clear and outdoor markets appeal to their collegial shopping preferences. Along with a booth at Project 1 Home Furnishings at West End Antiques Mall, he regularly participates in bazaars at Eric Schindler Gallery as well as Modern Richmond's annual market.

Meanwhile, he continues to maintain the studio and warehouse he's had in Shockoe Bottom for 17 years, as well as the larger space on South Side for all his midcentury finds.

"I wound up staying in Richmond because things happened early for me and I got comfortable," he says of not venturing farther afield. "My path hasn't been straight but it's been a great run."

When it comes to retirement, Beane can't see the attraction, though he admits to considering a move back to the Northern Neck. "People retire to do what I do. I might plant a nice garden, but I plan to do this until I die." S