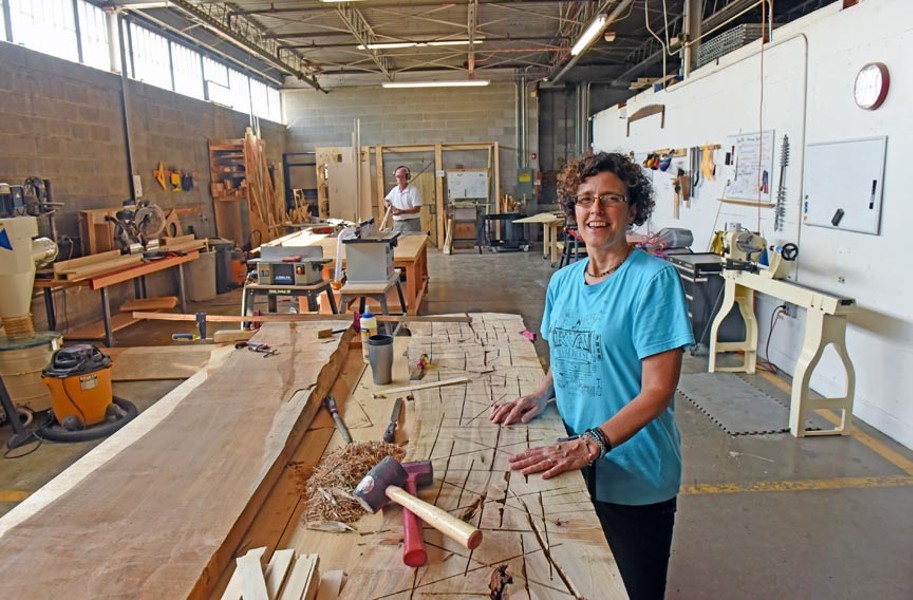 Scott Elmquist Former Martin Agency employee Mary Arritt launched RVA Makerfest as an independent endeavor to give local makers a public forum. This year, more than 8,000 attendees are expected at the Science Museum of Virginia.

“The kids were like, ‘Oh, we thought sweaters came from Wal-Mart,’” she says, describing a booth where wool was removed from sheep and spun into clothes. That was 2014, and the show has gone on in big ways. The fourth annual festival finds Arritt teaming with a host of volunteers who say they want to spark more a-ha moments. More than 8,000 attendees are expected to visit the Science Museum of Virginia, where 87 makers will be soldering, sewing and coding. That’s a lot of light bulbs going off.

The festival’s slogan —“Because things don’t make themselves” — offers a refreshing humanistic vision and shuns predictions of a wholly automated future. It’s not as easy a sale as it sounds. Board member Bruce Davies, who works with students at the Chesterfield County Makerspace, says he certainly sees many kids with practical know-how. “But I’m trying to encourage kids to take tech to the next step,” he says. “And get their minds wrapped around the artistic side of things.”

In other words, this year’s festival isn’t just a quirky craft party celebrating science, technology, engineering and mathematics, known by the acronym STEM. It’s also rethinking the social landscape by encouraging entrepreneurs to invent with finesse and feeling.

“Makerfest is helping to empower creators, and we feel like we can bring something especially meaningful to this community,” says Steve Van Dam, who’s presenting music education software with business partner Craig Honeycutt. Their app, called Oro, invites users to create a visual collage that’s animated by passages in songs. It’s a bit like making your own music video. Van Dam and Honeycutt have integrated Oro with a school curriculum to teach students about impressionism, improvisation and the physics of sound. The software is inspiring collaborations between young neural-typical and autistic creators, and a peer-reviewed research study is even being conducted on such at the Faison School.

Arritt says these kinds of innovations are making a huge impact on the next generation of makers. “We’re seeding the future,” she says. One of the most charitable maker projects she has witnessed was headed up by children at Tomahawk Creek Middle School. Students learned how to create a prosthetic hand with 3-D printers, and gave the prosthesis to a ninth-grade girl who had never used her left hand before. The girl has gone on to join the basketball team at Richmond’s Collegiate School.

But it’s been a struggle to give local makers a public forum, Arritt says. She let maker culture inform her work at the Martin Agency, and helped Andy Stefanovich brainstorm about the inaugural TEDxRVA. Yet her only resource for promoting Richmond’s maker community appeared to be Make Media, a template for maker festivals much like TEDx is a template for savant sound bites. Arritt says she received a manual from Make Media that was “3 or 4 inches thick,” and the honeymoon went downhill from there into a bureaucratic nightmare. Eventually, she decided to launch RVA Makerfest as an independent endeavor.

“For our first three years, we basically spent the whole year planning,” she says with a laugh that belies happy exhaustion. Her team must continue to meet a $10,000 annual price tag for using the Science Museum of Virginia as the festival venue.

Despite obstacles, RVA Makerfest has continued to grow attendance each year. High-profile visitors have even taken notice, like Anne Holton, the former Virginia secretary of education and wife of U.S. Sen. Tim Kaine. The Science Museum of Virginia is certainly watching the city’s exploding interest. Director Rich Conti says the staff felt “like we wished we could have this [Makerfest] everyday” and so he’s busily constructing the Forge, a permanent maker zone at the museum. “The Forge will be a space where you take that inspiration and make the world a better place,” he says.

Arritt says that Conti won’t be in competition with other maker spaces around Richmond. This year she started her own, called Build RVA, in Scott’s Addition. The idea might be for kids to graduate from the Forge to her business-minded operation, she says. There are also maker spaces at various libraries around Richmond, plus several 3-D printing boutiques.

Just don’t assume that the festival is exclusively for precocious youth, say Conti and Arritt. “I’ve had many volunteers tell me how excited seniors are elbowing their way to the front of lines,” Arritt says, chuckling. “And it’s not just to make soap. Grandparents really seem to like flying drones.” S

The RVA MakerFest is held Saturday, Oct.,7, from 10 a.m. to 5 p.m. at the Science Museum of Virginia. Free. rvamakerfest.com.