The Final Tally: What the Election Day Numbers Tell Us About Richmond

Correlations and conclusions about your neighbors from the strangest election season ever.

The crowded mayoral contest generated much conventional wisdom that the race would come down to one or two battleground districts. But pre-election hand-wringing about a potential runoff proved unnecessary with a clear victory for Levar Stoney.

The city’s charter calls for would-be mayors to win a plurality — the most votes, not necessarily a majority — in five of nine council districts. Anything less and there would be a runoff between the top two vote-getters citywide.

By the looks of the few polls on the mayoral race, broad conclusions were drawn about candidates certain to win some districts, leaving the impression that it would come down to the decision of one or two districts. But it turned out that building up numbers across districts — in Stoney’s case, a sort of winning crescent shape — was what mattered.

Stoney won comfortable margins in many of the city’s most densely populated neighborhoods. Runner-up Jack Berry carried healthy majorities of the heavily white 1st District in the West End and the southwest 4th, while Joe Morrissey came in a distant third place with pluralities in two South Side districts.

Stoney was second everywhere he wasn’t first. The bottom line: No runoff was needed — and he’ll be sworn in as Richmond’s 80th mayor on Dec. 31. 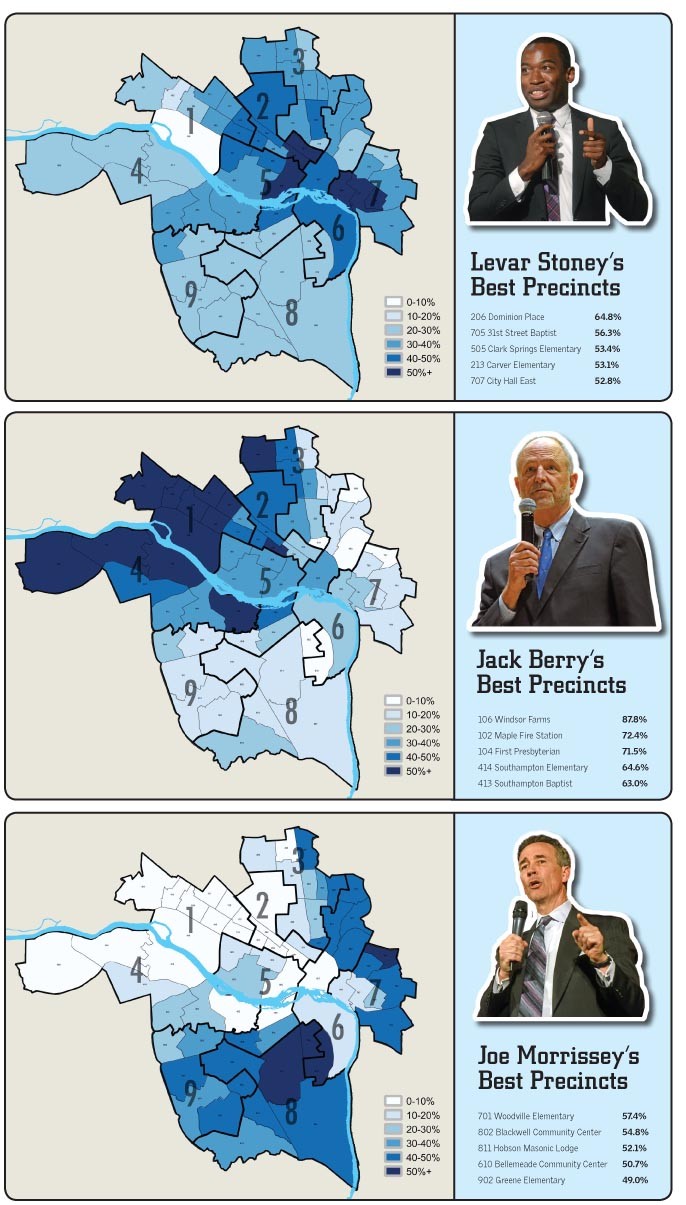 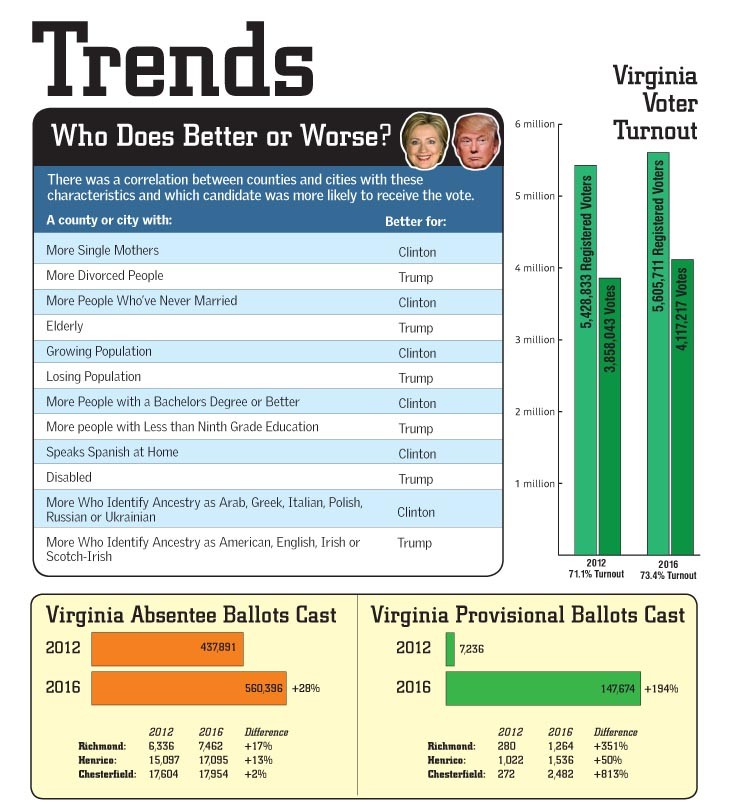 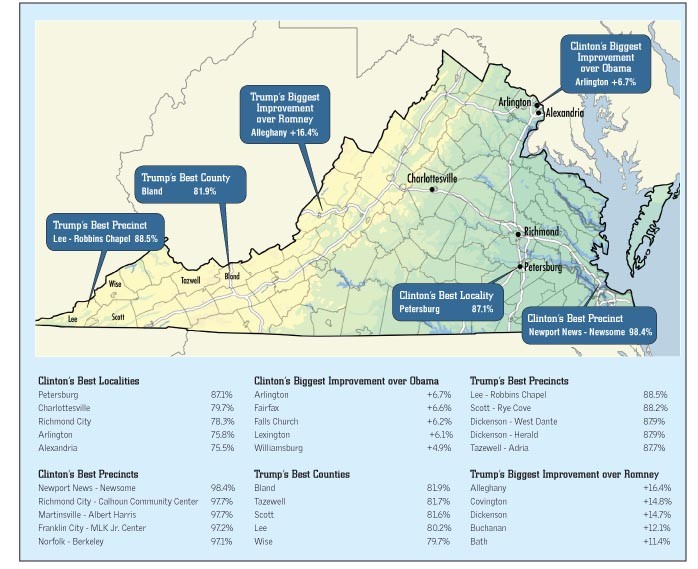 How Gary Johnson Fared
He landed a series of endorsements from The Richmond Times-Dispatch. But Libertarian candidate Gary Johnson captured only 3 percent of votes statewide. Despite the woeful results, there were some comparatively hot spots. Two of his best results were in Blacksburg, with 7.9 percent of the vote at Linkous Elementary and 7.3 percent at Virginia Tech’s Squires Student Center. The other three were in Richmond’s West End.

Oregon Hill Trends Green
Jill Stein, bearing the flag of the Green Party, convinced less than 1 percent of Virginia voters — 0.7 percent, to be exact — to go her way. Such low totals make it difficult to call any precincts bright spots for her, but her best in Virginia was Richmond 505, at Clark Springs Elementary — a precinct that includes most of Oregon Hill. There, 33 voters selected her ticket.

Mormon Love?
Independent candidate Evan McMullin attracted little attention in Virginia, but he performed head and shoulders above his statewide median of 0.6 percent in one city, Buena Vista. In that small city surrounded by Rockbridge County, 7.3 percent of voters cast ballots for him. There may be a ready explanation for this anomaly: With a Virginia-high 22.5 percent of its residents belonging to the Church of Jesus Christ of Latter-day Saints, Buena Vista’s Mormons may have given the nod to their co-religionist candidate.

Trump’s Mountain Range
All but one of Donald Trump’s 120 best precincts in the state lie west of the Blue Ridge Mountains, with particularly strong showings in the coal country of the deep southwest. The lone exception was tiny Tangier Island, in the middle of the Chesapeake Bay. There, 87.3 percent of the isolated community’s voters chose Trump.

By Denomination
In what likely says more about the demographics of their adherents than the religious sects themselves, counties with high percentages of Catholics or Episcopalians proved much more likely to favor Clinton than Trump. Localities heavy on Southern Baptist churchgoers slightly preferred Trump in aggregate.

A Little Liberty
A group of Liberty University students made headlines by releasing a letter opposing Donald Trump’s candidacy, countering the support of the university’s president, Jerry Falwell Jr. Though heralded as an act of bravery, the group appears to have been quite small indeed: 85.4 percent of voters at Liberty’s on-campus precinct voted for Trump anyway.