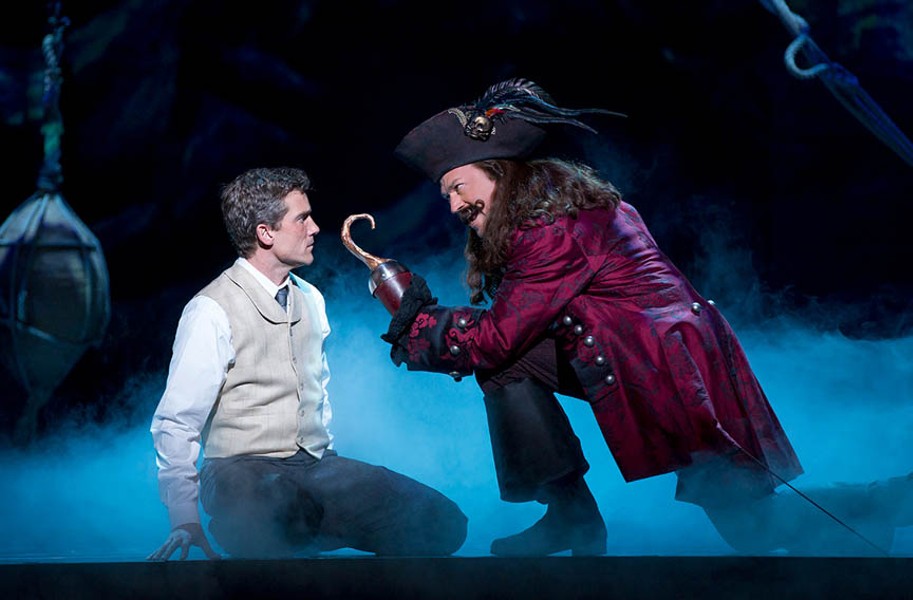 With books, plays, movies, musicals and a brand of peanut butter bearing his name, is there any medium that Peter Pan hasn't touched?

Created by Scottish novelist and playwright J.M. Barrie around the turn of the last century, the story of Peter Pan has proved an enduring classic. This week, the story behind the story is taking Richmond's stage as the musical "Finding Neverland" comes to the Altria Theater.

Based on the 2004 Johnny Depp and Kate Winslet film of the same name, the musical shows how Barrie was inspired by the Llewelyn Davies family — and young Peter Llewelyn Davies in particular — to create the icon in both theatrical and book forms.

"It's kind of the story of how Peter became Pan," says Lael Van Keuren, who plays Sylvia Llewelyn Davies in the touring production. "Sylvia is a widow, and she's the mother of the four little boys that inspire J.M. Barrie to come up with Peter Pan."

Taking place in London in 1903, the musical begins with Barrie coming off a string of professional flops.

"He's in a rut. He just keeps churning out the same material," Van Keuren says. "He's not really inspired, and all of a sudden he encounters the Llewelyn Davies family, and through their playfulness and their zest for life, he rediscovers the child within himself."
In the musical version, Sylvia's husband has recently died from cancer, and she is in failing health herself.

"It's so exciting to be in a period show that deals with such heavy issues, but then we have this contemporary British pop score," Van Keuren says, refering to the music and lyrics of pop star Gary Barlow and songwriter Eliot Kennedy.

One of Van Keuren's favorite numbers is her solo "All That Matters," where Sylvia sings about how Barrie is helping her overcome her sadness and fear.

"It's kind of her anthem," she says. "She gets to make all these discoveries, and I love singing it every night."

Another standout for Van Keuren is "Neverland," which Barrie sings to Sylvia about how he came up with the idea of the imaginary Neverland when he was a child.

"All of a sudden, his play really takes on a life of its own," she says.

Van Keuren says "Finding Neverland" is a perfect show for the whole family.
"For people that haven't seen it, I think they're going to walk out of the theater hopefully feeling closer to their loved ones, or wanting to hold their loved ones a little closer," she says, adding that the touring show features top-notch performers.

"We have some of the best dancers in our industry, and some of the best voices carrying our show along," Van Keuren says, including six children who share the roles of the Llewelyn Davies sons. Two canines play Barrie's dog Porthos: Sammy is the lead dog; Bailey is Sammy's understudy.