Richmond photographer Jamie Betts does what it takes to capture the past life of a decaying place.

Jamie Betts Photo Richmond photographer Jamie Betts shot this abandoned boarding school west of town about a month ago. He moved the chair from the wall into the light. “I found the wallpaper to be really unique,” he says. Betts prefers to shoot in what he calls moody situations: “I generally don’t even go out on sunny days.” He’s reluctant to give exact locations of some of his subjects, saying too much exposure would endanger them.

It's 14 degrees outside, the sun hasn't risen, and Jamie Betts is creeping around an abandoned mental hospital, trying to find an unlocked door.

He's driven 100 miles northwest of Richmond on this Saturday morning to the white-columned, red-bricked building capped by a fourth-floor cupola. Opened in 1828 as Western State Lunatic Asylum, the building he hopes to enter has been out of use since the '70s, and appears in online listings with titles like "disturbing and particular places."

But Betts isn't a ghost hunter, he's a photographer — one with an impressive body of work capturing abandoned, eerily beautiful and often creepy places like this.

The first door Betts tries doesn't give, so he moves on 20 feet to the next possible entrance. Also padlocked.

By the third door, tension is building: Betts, his girlfriend and another photographer woke up at 4:30 a.m. to get here so they could slip in before daylight. But if a door does open — well, they're suddenly waiting an hour for sunrise within the dank, cold walls of an asylum.

The anticipation peaks with the creak of the final door opening when Betts leans into it. Soon paint chips are crunching underfoot while Betts and his crew make their way through abandoned corridors of cell-like rooms and up to the top floor.

There, they locate the reason for their trip: an impressive spiral staircase leading to the cupola situated in the center of a large, empty room.

The sun slowly reveals peeling, lime-green paint surrounding the large white staircase twisting up into the ceiling. Its sole purpose is apparently to provide a 360-degree, panoramic view of Staunton. 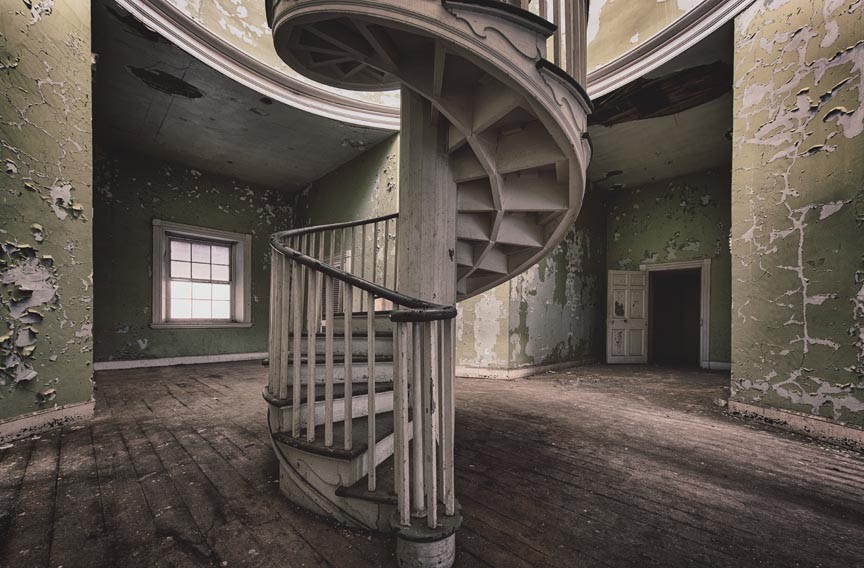 At 43, Betts, a native Richmonder, has been working full time as a photographer for 12 years. He's done weddings, commercial work, band shoots of groups such as Gwar, and editorial jobs for magazines such as Men's Health and for the Civil War Trust.

He got into it when he was living in Wyoming, where he visited ghost towns and encountered abandoned mines while hiking. Yes, he says, he'd be out hiking, see an abandoned mine, and think, "I want to go in there and photograph that."

For him, the appeal is twofold. First, he likes the challenge of trying to capture the mood the places evoke, and second, he's drawn to the process the places represent — nature as it slowly retakes manmade structures.

"There's moss, stalactites coming through the ceilings from rain — they almost start to look like caves," he says. "But for me, it's all in the details — the weathered look of the buildings that have been aged. It's a lot more attractive to me than clean lines."

There's also an element of adventure. Betts, whose portfolio includes pictures he's shot while chasing storms, says the work almost always requires ignoring no-trespassing signs. Owners of such properties are not typically inclined to invite people in, and even if they are, insurance companies pop up to spoil the fun.

Occasionally, this means running from people who don't take kindly to trespassers, even if they're doing so in the name of art. In one such case, Betts found himself fleeing by car after stopping on a rural route to shoot the outside of an abandoned house. Betts says he didn't know exactly what his pursuer wanted, but he also wasn't inclined to stick around to find out. 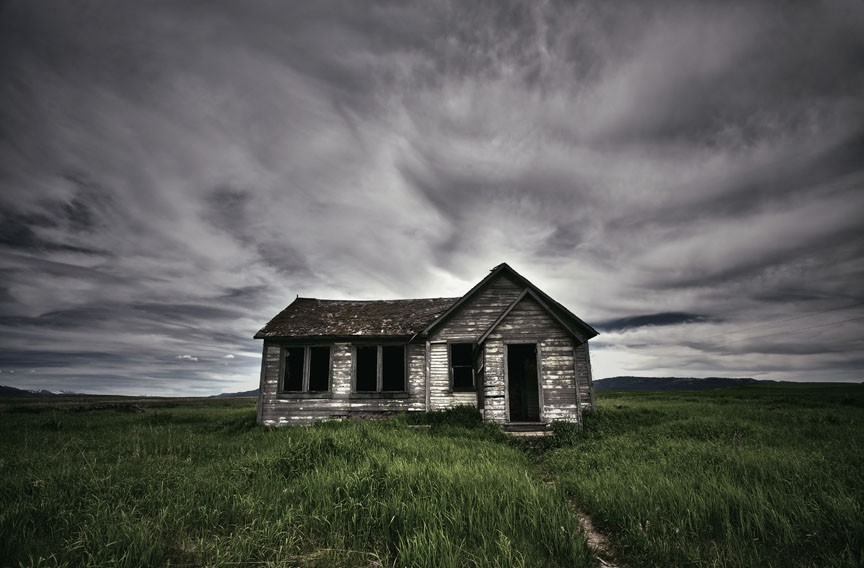 Betts says he's willing to jump fences and ignore signs. "I'll definitely do what I need to do to get the picture," he says.

But he does have limits.

"I'm not one to break and enter," he says, "but I'll certainly trespass."

In Richmond, his adventures have taken him into abandoned warehouses in Manchester, the old Fulton Gas Works off Williamsburg Avenue and a handful of abandoned farmhouses and barns on the outskirts of the city.

At the Staunton mental hospital, Betts stayed on the trespassing side of the law by finding that already-opened door. (Taking a crowbar to one would have constituted breaking and entering.) He stayed into the afternoon without anyone noticing.

Beyond the stairs, though, he says he didn't get much. But the spiral up to the cupola made the trip worth it, he says.

Betts says typically the appeal of such excursions is the adventure of not knowing what he'll find, but in this case he'd seen pictures of the staircase before and imagined it in some faraway European place. When he found out recently they were in Virginia an hour and a half away, he decided he wanted to make a photograph of his own — a kind of trophy showing he'd been there.

"The highlight really was the stairs," he says. "I've been waiting to see them for a long time, though I'd prefer to have gone on a day that's not 15 degrees, or that early. But it added to the mystique." S

See more of Jamie Betts' photography, including shots from Detroit in the slideshow below. Find him on Instagram and his personal website.