The Essence of Lucinda Williams

A road-tested legend pulls into the National. 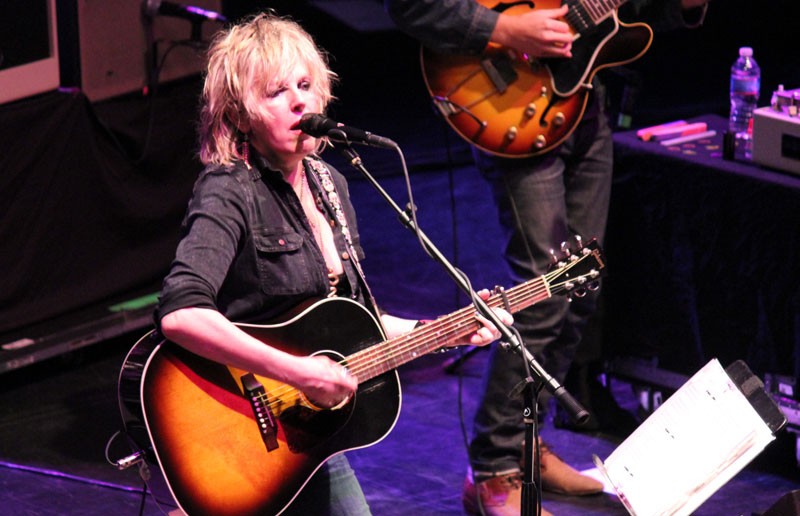 Nearly 25 years ago, a young Louisiana songwriter sang, “Is it much to demand, I want a full house and a rock and roll band” on “Passionate Kisses,” the first single from an early album, “Lucinda Williams.”

On Tuesday night at the National, the living legend got both. Fold-out seats accommodated the NPR-loving set who wanted to hone in on William’s perfectly crafted lyrics, while the walls were lined with torn-sleeved hipsters swigging beer.

Without an opening act, Williams took the stage to reaffirming yelps and hollers and with a smile said, “I can tell this is gonna be a good night already.” She strummed the chugging chords of “Can’t Let Go” and the four-piece force behind her, Buick 6, fired off rounds of blazing twang infused rock ’n’ roll. She followed with “Pineola” and “Buttercup” from her latest album, “Blessed.” She admitted that the latter was about the same guy she wrote “Jailhouse Tears” about and laughed.

The audience hung on every moment where the 58-year old singer shared the stories behind the songs, which happened about every 15 minutes giving the performance an intimate feel without feeling like a contrived episode of VH1’s “Storytellers.” Sometimes Williams confessed that the songs didn’t come from the influence of her poet father or a busted heart, but rather more simple things. “This one was inspired by a bumper sticker I saw in Houston that just said ‘I Found It,’ so I wrote a song called “I Lost It.”

Over the next two hours, Williams pulled songs from across her road-tested career including “Well, Well, Well” from “Little Honey” and “Reason to Cry” from “Essence.” She offered a timely dedication to the late Amy Winehouse with “Little Rock Star” and noted that the singer was part of the inspiration behind the song. The “sex, drugs and rock ’n’ roll” part of the evening oddly followed and was ushered in with the wailing guitar of “Bleeding Fingers” and sensual, come-hither verses of “Essence.”

Williams swayed back and forth like a teenager caught up in a favorite song for the first time and belted out a smoldering version of “Unsuffer Me” which showed off both her distinctive vocals and range. Just before the end of the first set, the singer professed her love of the city and the venue. “This is one of my favorite shows this round out. They’ve got it all figured out here. You can go to the restaurant next door. You can get a drink here. I like it,” she said.

Lu and company returned to the stage to play an acoustic version of “Blessed” from the latest album of the same name, followed by a rousing cover of Buffalo Springfield’s “For What It’s Worth.” Williams noted that the song “was more important now than ever,” giving a slight peek into the singer’s stance on current events.

The band bid the crowd adieu with a rousing version of “Get Right with God” that felt more like Southern Sunday revival than a school-night show. After hanging out in honky-tonk heaven for nearly two hours, the house lights came up, pulling the night to a satisfying close. Lucinda Williams waved goodbye and headed back out on the road for a little more inspiration.