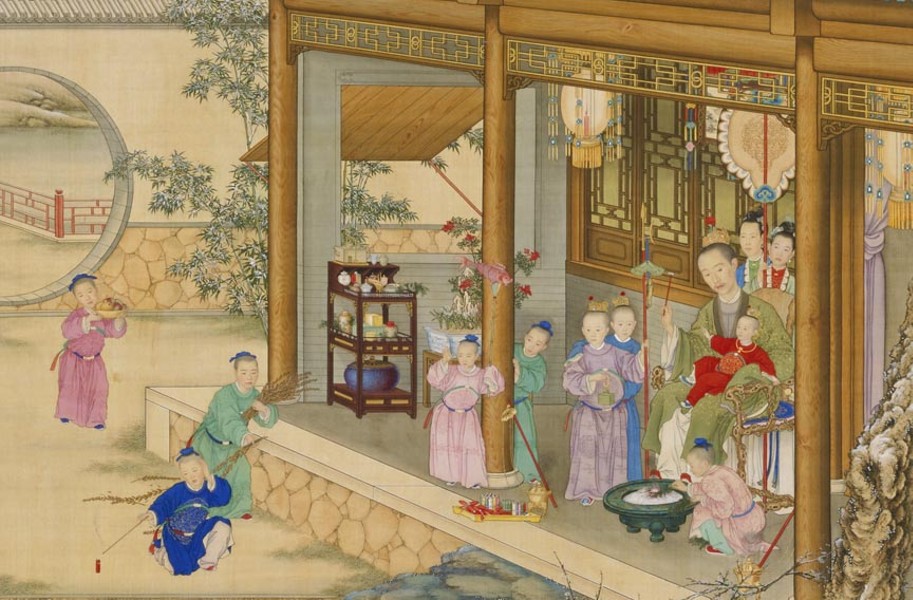 “Emperor Qianlong Celebrating the New Year,” an 18th-century scroll, depicts a hierarchal domestic scene as does a 1700s painting of the Payne household in the VMFA American collection (below).

The images were strangely intimate considering the cultural and economic differences between the respective countries. And for all we know, the presidents were discussing their families or comparing golf games.

I’m struck by a similar thought while visiting the elegant installation of the beautiful and expansive exhibition at the Virginia Museum of Fine Arts, “Forbidden City: Imperial Treasures from the Palace Museum, Beijing.” The title contains loaded words such as forbidden, imperial and treasures, which simultaneously ignite our fantasies and reinforce difficult-to-shake prejudices that view Chinese culture as essentially exotic or Oriental.

But among these 200 objects — paintings, gold and silver items, jade pieces, lacquer ware, ceramics and textiles of exquisite craftsmanship — there is a surprising intimacy. The pieces may have been commissioned by a string of royal households stretching from 1420 to 1924, but occasionally individual figures break free from the carefully scripted adherence to long-held art motifs and traditions.

And there’s something else: A number of these sumptuous objects are intriguing because they appear vaguely Western. Could a closed society have been open to outside ideas?

Evidently. Consider “Emperor Qianlong Celebrating the New Year,” a hanging scroll of ink and color on silk from 1736-38 by artist Lang Shining. It depicts Emperor Qianlong’s observance of a New Year’s festival within the palace confines. He is surrounded by young family members and attended by servants. The emperor holds an infant in his arms while he watches the other children enjoying firecrackers. A gold crown on Quianlog’s head signifies his royal status, as do similar headpieces on the baby and other family members nearby.

The relaxed setting and the hierarchal positioning of family and servants, however, recalls English and American family group portraits of the same period, such as the VMFA’s “Alexander Spotswood Payne and his brother John Robert Dandridge Payne with their nurse.” This late-18th-century oil on canvas hangs in the American galleries. And while the artist of the museum’s painting is unknown and the style naive, it and “Emperor Qianlong” — painted by a highly skilled, academically trained artist — are both everyday or genre scenes.

Some other things are going on in “Emperor Qianlong.” If it relates vaguely to Anglo-American portraiture, the father figure holding the child recalls Italian religious panel depictions of the Holy Family in paintings of the Gothic period by such masters as Duccio or Simone Martini. There’s a reason for this: The Chinese painter Lang Shining was an Italian, Giuseppe Castiglione (1688-1766). Certainly, he’d studied the Italian masters before he was invited to the imperial Chinese court to be enmeshed in additional, Eastern techniques.

So this single object, of Emperor Qianlong at New Year’s, suggests a connectedness to a larger universe than the imperial court. It’s a connectedness we don’t usually attribute to traditional Chinese artwork.

But these treasures on view from the Palace Museum, the largest in China, mostly and collectively reinforce viewers’ knowledge of the slow-to-change aesthetic of the rich and consistent Chinese culture. Viewers probably won’t emerge from the museum’s exquisitely lighted and perfectly displayed lower-level galleries without feeling affected by seeing such intense beauty and artistic restraint. The exquisite line quality of the drawings and paintings alone is worth a visit. Particularly thrilling are the almost journalistic overviews of ceremonial occasions long ago. But the graphic perspectives are so intriguing — three-dimensional and isometric — they seem contemporary.

This freshness pervades the entire experience. And isn’t this why we travel? To be refreshed by seeing and learning new things? So if a main reason to visit “Forbidden City” is the lure of otherness of Chinese art, major rewards await in discovering ways and perspectives of seeing things anew. S

“Forbidden City: Imperial Treasures from the Palace Museum, Beijing” continues through Jan. 11 at the Virginia Museum of Fine Arts, 200 N. Boulevard. Open daily (including Thanksgiving and Christmas), no general admission. Extra fee for “Forbidden City” except for museum members. 340-1400.