The Edge of August

Grappling with the disenfranchised, “Emily the Criminal” is the rare modern crime movie that’s too short, plus the one-gimmick thrills of “Fall.” 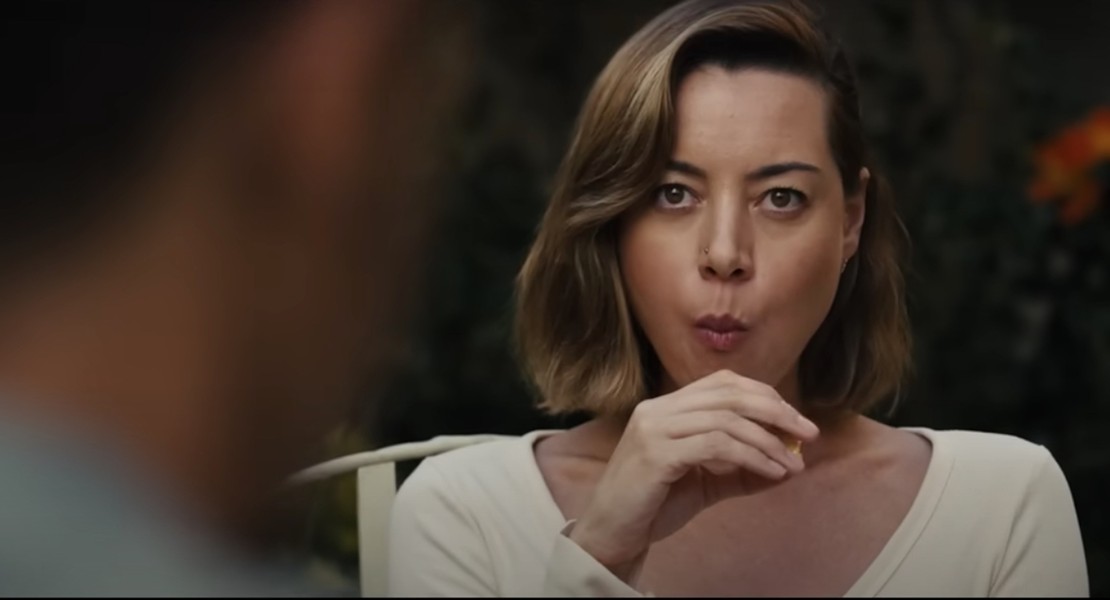 Aubrey Plaza proves she's one of the best actresses working today, with "an inherent volatility that renders every emotion believable and visceral," in "Emily the Criminal," the debut from writer-director, John Patton Ford.

In case you haven’t noticed it’s August. The humidity is existentially unmooring, the horror nerds are looking ahead to their Halloween parties, and movies are entering that limbo between modes of summer kitsch and Oscar-courting prestige. There’s a sense of relief to the movies of August. They don’t need to be awesome; they can merely be movies. They can have actual characters, and they don’t require action scenes that might bankrupt a small country. Size matters during the summer, though August cinema can be beguilingly small, composed of things that studios barely have an idea what to do with.

Would “Emily the Criminal” have stood out in, say, June, among “Top Gun: Maverick” and another Blumhouse horror movie, as well as “Elvis,” another “Jurassic World,” and a bunch of supersized kids’ properties? Maybe, maybe not, but the malaise of August suits it. It is a taut crime thriller that has things to say about this country’s hypocritical treatment of the disenfranchised, especially ex-cons and the poor and the just-starting-out. Our society expects people to pull themselves up by the bootstraps while drowning them in debt and interest charges, as well as pressuring them to work for free as “interns.” There’s also the fact that criminals are expected to reform while being deemed unemployable, and so on. There’s a sense in “Emily the Criminal,” quite earned, of society as a petty judge looking to knock you for anything even remotely out of line.

Emily (Aubrey Plaza) is trying to carve out a living in a world unreceptive to her abilities. She has a felony conviction in her past, which she must implicitly apologize for to job interviewers, who passive-aggressively rake her over the coals before dismissing her anyway. Given that Emily can’t get a job that we deign respectable, as in “pays a living wage” and “suggests future prosperity,” she’s stuck working an anonymous catering gig, which gets around employee rights by classifying her as an independent contractor. Of course, Emily has a friend who has a great job, and speaks of traveling to say, Portugal, like it’s a birth right, while Emily is eaten alive by compound interest on legal fees.

I know nothing about the film’s debuting writer-director, John Patton Ford, but I’m guessing he’s experienced some version of Emily’s predicament. “Emily the Criminal” is too intimate, and too inventively loaded with too many grievances, for it to be a matter of impersonal conjecture for Ford. I certainly have—try getting a job with a degree in media arts and design, whatever that is, in the midst of a recession or two. I have worked in the gig economy, which is as exploitive and demeaning as Ford suggests. I have attempted to swim in a quicksand of fees designed to ensure that the poor never ascend the mountain of what they owe. And this is what happens internally when you find yourself in these situations for a prolonged amount of time, as I have, as Emily has, as many others have: the imposed impotency fosters a corrosive rage that renders you truly unemployable. You become so bitter that you are the person the smug bureaucrats insisted you were to begin with: a “problem” and “not quite what we’re looking for.”

Ford gets these details startlingly right, particularly in a nervy scene where Emily finally has an interview so bad that she writes off legitimate society entirely. Her affluent friend gets her an interview with a design agency bigwig named Alice (Gina Gershon), without telling Emily that it’s an unpaid internship. Emily says what we’ve all thought: that internships are a scam to get people to work for free, while Alice parrots right-wing notions, accusing millennials of wanting “free stuff” for the crime of not wanting to spend their entire youth “paying their dues.” The fury of this scene is acidic, and exacerbated by the unexpected perversity of having Gershon, a warm presence who has made a career playing symbols of sexy rebellion, play the cold and self-righteous hotshot.

“Emily the Criminal” is unusually suspenseful for broaching issues of money, which movies often avoid as strenuously as sex. Emily’s rage at struggling to pay bills, and at having her obvious talents ignored, renders her identifiable—we’re on her wavelength from the film’s opening scene. That she can draw, and has aspirations as an artist, isn’t negligible either, as this is a movie about how artists are shunted to lives of indentured servitude, with the crime plot serving as a revenge fantasy. Emily stumbles into a credit card scam and excels, as her anger gives her the ferocity that she needs to defend herself against predators. An early scene, which complements the later scene with Gershon, illustrates this idea. Emily is held hostage with a box cutter to her neck while her safe with thousands of dollars is stolen. Rather than fold, as she has with banks, courts, and corporations all her life, she retaliates in a moment of stark exhilaration.

Ford rhymes the details of the credit card scam, which he renders with fascinating specificity, with the textures of the straight job interviews. The underworld has its own rules and caste system too, but it acknowledges that it’s mercenary, without hiding behind innuendo. When Emily shows up at a warehouse to buy goods with fake cards, she must provide a reference as she might at a regular interview, with the difference here being that a wrong name might get her killed. Weirdly, this sense of danger suggests a clearing of the air, and Emily is intoxicated with the opportunity to use her intelligence, and flip gig economy on its head.

Running a fat-free 96 minutes, “Emily the Criminal” is the rare modern movie that’s too short. I could’ve used more scenes like the extraordinary, up close and personal sequence with the thief, his woman, and the box cutter. This moment, terrifyingly, indicates a vast and byzantine world of predators hidden in plain sight. I could’ve also used more context regarding the rivalry behind the credit card operation, between Youcef (Theo Rossi) and his cousin, Khalil (Jonathan Avigdori). And when Emily and Youcef go to bed together, you sense formula kicking in, overtaking the film’s textural intensity. They are both very attractive, but the idea of a crime lord going against his family for an outsider is kid’s stuff. Yet Ford keeps his scenes short and hyper-charged, leap-frogging from one calamity to the next, pressurizing Emily’s bitter desperation.

One more thing before we leave “Emily the Criminal.” It is clear here, as it was in movies like “The Little Hours” and “Black Bear,” that Aubrey Plaza is one of the best American actresses working. Plaza has an inherent volatility that renders every emotion believable and visceral—exuding the sort of raw dexterity that tends to be underrated in a critical climate that values consistency, aka predictability, as a totem of prestige.

By contrast, take Rebecca Hall, an acclaimed actress who bores me to catatonia once a year. Currently Hall is in “Resurrection,” yet another modern horror movie that values theme over id, and she gives the same repressed, anal-retentive, technically proficient performance that she gave in “The Gift” and “The Night House,” among others. To steal something that Pauline Kael accurately wrote of Meryl Streep, Hall suggests the performer as good student, while Plaza embodies an artist who’s willing to unhinge herself. If Plaza were in “Resurrection,” it might’ve been unshakable, rather than another politically correct art doodle. Put Hall in “Emily the Criminal” and you’ve got … another drab Rebecca Hall vehicle.

“Fall” is August-movie unpretentiousness incarnate, a streamlined thriller that works you over straightforwardly. Director Scott Mann, son of Michael, has learned a few things since his regrettable “Heist,” which was unforgivably named after a pretty good David Mamet crime movie. Mann has a flair for spatial logistics now, and a 1970s-era Spielbergian gift for imbuing little normal things with inexplicable menace. “Fall” seems designed to be a calling-card project, showing that Mann is better than, say, “Heist,” and it succeeds on those terms. But it’s just good enough to make you wish it was better.

It's a one-gimmick film, though the gimmick is good. Two daredevil bad asses, Becky (Grace Caroline Currey) and Hunter (Virginia Gardner), decide to climb an abandoned radio tower in California, which is based on a real structure, the KXTV/KOVR Tower outside Sacramento. This tower is excruciatingly thin, suggesting a space needle going straight to the heavens, standing 2,000 feet. Becky and Hunter are to climb a ladder nestled into a cage for the first 1,800 feet, with the final 200 feet outside and open to the elements.

Because this is a derivative B-movie at heart, we’re saddled with a baggy bit of backstory. In the tradition of the heroes of “Cliffhanger” and “The Descent” and many others, Becky loses a loved one to a fall while mountain climbing. Risking her life on this tower is meant to cleanse her of fears that many people would find quite reasonable, but which represent death for people of Rebecca and Hunter’s proclivities. (For anyone keeping score at home, two other elements are borrowed from “The Descent”: a twist regarding the women’s relationship and a fake-out involving who’s alive and who’s dead.)

But the plot is window dressing. We go to movies like “Fall” to see how well the directors can exploit primal sensory fears. For 45 minutes, Mann does shrewd work, utilizing the best trick of “Mission: Impossible—Ghost Protocol,” in which Tom Cruise scaling a vast tower was framed so that we could see all visual planes—background, mid ground, foreground—simultaneously within the frames. The potentially lethal bottom of the terrain, seemingly an eternal fall away, always haunted Cruise, as it haunts Becky and Hunter here. There’s a great paradox to this film’s set-up, as we are trapped out in the wide open, feeling claustrophobia in a desert sky realm of endless space. A rickety ladder collapses, and Becky and Hunter are trapped at the very top. With help not on the way, they will have to summon wiles that are advanced even for their own skill set.

The pleasure of these stuck-somewhere thrillers resides in a contest between the filmmakers and the audience. Will they think of solutions to these problems that transcend our imagination? In the case of “Fall,” the answer is no.

The ending is a jarring anticlimax and, once we get accustomed to the way-up-high visuals, there’s nowhere else for the movie to go. Remember that scene in “Mission: Impossible—Ghost Protocol” lasted a few pulse-quickening minutes before moving onto something else, while “Fall” is devoted to a state of entrapment, aka redundancy. And the cheesy self-actualizing conceit, once again on loan from “Cliffhanger” and “The Descent,” dampens the perversity of the thrills. Becky must overcome the tower as a symbol of healing from grief, which is formula eyewash. Great thriller directors are empathetic in the service of cruelty—for locating your pressure points—not for giving you the feels.