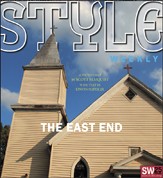 East End is the city's oldest and -- after decades of sleep mode — its hippest up-and-coming neighborhood. But mostly it is a place of startling contrasts.

The crest of Church Hill overlooking the James River is where the city's historic preservation movement got legs. This came with the careful restoration of the now-stylish neighborhood immediately surrounding St. John's Episcopal Church — where in 1775 Patrick Henry called out for either liberty or death.

Sadly, just a few blocks to the north, thousands of residents live in poverty and virtual obscurity: Just last week, on Wednesday, Oct. 3, a man was shot in the Whitcomb Court public-housing complex, becoming the city's 41st homicide victim. His murder rated a notice buried in the Metro section of the Richmond Times-Dispatch.

Famous names are ingrained in this storied part of town, which stretches from Shockoe Bottom and I-95 eastward, through Henrico County and the Chickahominy Swamp, to Charles City and Hanover counties. Powhatan and Pocahontas lived atop its bluffs above the James. William Byrd II laid out the town's gridiron street system in 1737. Confederate intelligence passed through Union spy Elizabeth Van Lew's Church Hill mansion on East Grace Street to aide the Union. In April 1865, President Abraham Lincoln arrived at Rocketts Landing and walked with his son Tad through the city's charred streets.

In the 19th century, the East End was Richmond's Ellis Island, with Shockoe Bottom being the first address for many transplanted Eastern Europeans. And although a former synagogue was recently converted to luxury condominiums, two old Hebrew cemeteries remain in the area. A former Presbyterian mission church that served the residents in the Bottom is now a graphic design firm. In the 1920s and '30s, African-Americans settled in greater numbers in Shockoe Bottom, many having moved here from rural parts of Virginia.

Today, visitors to the city can once again arrive in the East End, via Amtrak and the portals of the spectacularly restored Main Street Station. Thousands more daily arrive at Richmond International Airport on Williamsburg Road. Old-timers remember when the facility was named for Admiral Richard E. Byrd, a descendant of Richmond's founder and an explorer who "discovered" the South Pole.

For many years Fulton Bottom and Fulton Hill were major residential magnets in the East End. Whites lived in the Bottom and worked at the city docks, for railroad companies or in the tobacco factories. With the development of the electric streetcar after 1888, it became just as convenient to live at the top of the hill. Blacks replaced whites in Fulton Bottom.

The tightly knit, white Fulton Hill community, with its small-town atmosphere of corner drugstores and Robert Fulton Elementary School, was loosened after World War II when developers began building tract housing alongside older residences for come-heres. Although Fulton School was closed, vandalized and bought for redevelopment, today it houses artist studios. And Richmond artist Paul DiPasquale, the sculptor of The Diamond's "Brave" and the Arthur Ashe monument, lives and works nearby. The tennis legend is buried near Maggie Walker in the East End's Evergreen Cemetery.

Traditionally, Richmond has expanded mostly westward and southerly. When the electric streetcar lines were laid, amusement parks were established at the South Side and Westhampton termini to lure riders. A bicycle club was an already established magnet for the North Side line. But in the East End, Oakwood Cemetery, a resting place for 17,000 Confederate dead, was such a popular draw for whites that the electric railway company needed no additional enticement.

Today, East End houses many of Richmond's poor who cannot leave, and it's simultaneously the address of choice of those who are flexible. Recent arrivals from far-away places are once again settling in Shockoe Bottom — in converted warehouses along Tobacco Row, in new town houses or in spanking-new mid-rises in the unique riverfront Rocketts Landing community.

Last week a recent arrival from Ohio was directing movers and unpacking at his new condominium at The Reserve, a former warehouse on the corner of East Franklin and 25th streets. He compared Richmond with Columbus. "The cities are a lot alike," he said. "They're the same size and both have healthy art scenes, but Richmond is more expensive." S