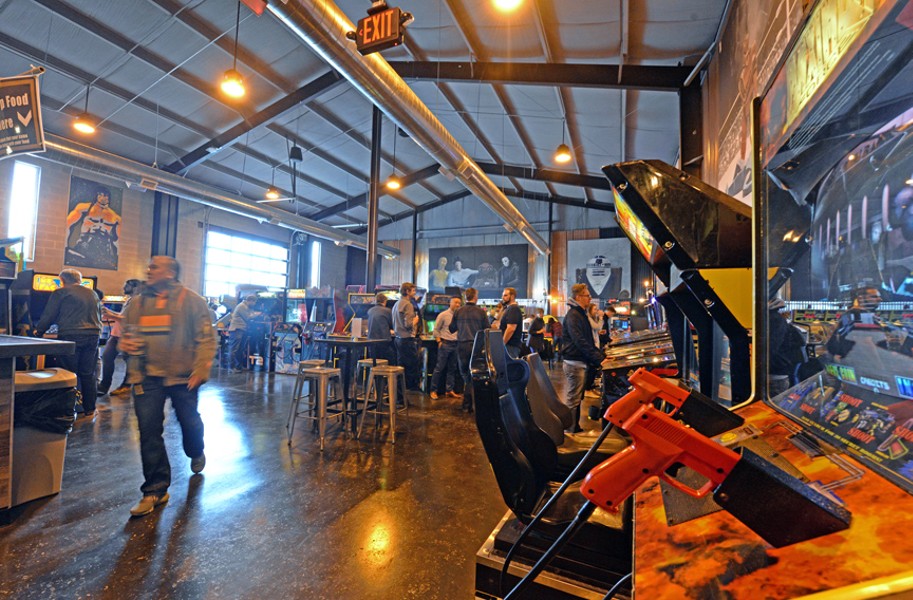 The advent of the Circuit Arcade Bar in Scott's Addition and the growing popularity of arcade games in breweries leads inevitably to a burning question: What beers pair best with games? To find some answers, I asked around at Circuit during a recent gathering of craft beer fans and brewers, including respected craft beer pioneer and Dogfish Head Craft Brewed Ales owner, Sam Calagione.

For Alex Miller, assistant brewer at Stone Brewing in Richmond, playing pinball is nostalgic. Despite frequent moves, her father insisted that the pinball machine travel with the family, no matter where the Army stationed him. For a similar reason, playing the classic arcade game sparks Miller's memories of one specific beer: Tröeg Troegenator Double Bock.

"It's not the beer you'd pair with pinball," she says of the lager with 8.2 percent alcohol, but it's the one that got her into beer, and she associates it with her dad. A perfect pairing.

I catch up with Miller at Circuit as she's conquering the "Walking Dead" pinball game. With its splatters of fake blood and gruesome faces, the sounds of the ball bouncing against the bumpers disappear against the arcade's background noises.

"The beer I'm drinking depends on what I'm playing. For intense games, I like a good hefeweizen, light but full-flavored," she says, pausing to insert a coin for another round. "I'm also a fan of stouts and video games. They have the darker malt flavor but not too bitter, not too sweet."

One of her favorite games, Portal, requires a lot of thinking, so she plays it with a Saison Dupont, which is a Belgian pale ale. "Complexity with complexity," she says.

With the "Legend of Zelda: the Twilight Princess" on Wii, she prefers Tangerine Express IPA from Stone Brewing.

"That is an awesome pairing," she says. "Enough hops, but a good sessionable beer, because the game takes a while to play."

Next I check in with Jeff Metz, brewer at Kindred Spirit Brewing, while he takes on the "RoadBlasters" video game, weaving his car down the endless highway toward the ever-distant city and drinking 6th Borough, a dry-hopped Czech pilsner from Captain Lawrence Brewing Co.

"It's low ABV, has good flavor, and it's refreshing," he says. "I'm not interested in a higher-ABV beer right now. I prefer a more sessionable beer, in the 4 to 6 percent range. You can have more than one and still manage yourself, but it's light and flavorful."

Metz tells me of a recent Kindred Spirit release, Paradise. A lager at 4.8 percent alcohol that's dry-hopped with citra, it's ideal for cookouts and the beach — and, of course, video games.

Next up, Hardywood Park Craft Brewery brewers Justin Becker and Jay Eychaner are aiming to obliterate the zombies in the House of the Dead 2 while drinking Grizacca, a saison from Oxbow Brewing Co.

"It's light, not too distracting," Becker says between rounds. "You could have one or two and not have too many."

Turns out, the game is suitable for pairing with drinking, too.

"It gives you time to pause, take a sip of your beer," says Eychaner as he annihilates the evil dead. He recommends sipping on Ardent's Commonwealth Man pilsner while playing the game. "It's a good go-to — not something I have to think about too much."

Besides a brief, friendly Skee-Ball competition, Tarpey and Calagione spend the evening making the rounds of people rather than games, but they do weigh in on their game and beer pairing preferences.

"My go-to game in the '80s and today is Asteroids. It pairs really well with an inky imperial stout," he says, like World Wide Stout or Bitches Brew, two of his brewery's best-known night-sky stouts. Better to crush a beer than get crushed by space debris.

"I'm old school," Safarik says, citing "Galaga" as his game of choice. "You have to keep your wits about you, so I'd drink Namaste or Seaquench," Dogfish Head's 4.8 percent Belgian-style white ale and the 4.9 percent sour, respectively. The electronic sound effects of "Galaga" are trippy enough — no need for a high-alcohol beer.

Tarpey recalls playing "The Simpsons" video game, which he would pair with an IPA or a pilsner: "Something you can crush," he says.

He may even have landed upon the perfect game to pair with beer. To paraphrase Homer Simpson: "Oh boy, arcade games. The perfect break between work and drunk." S