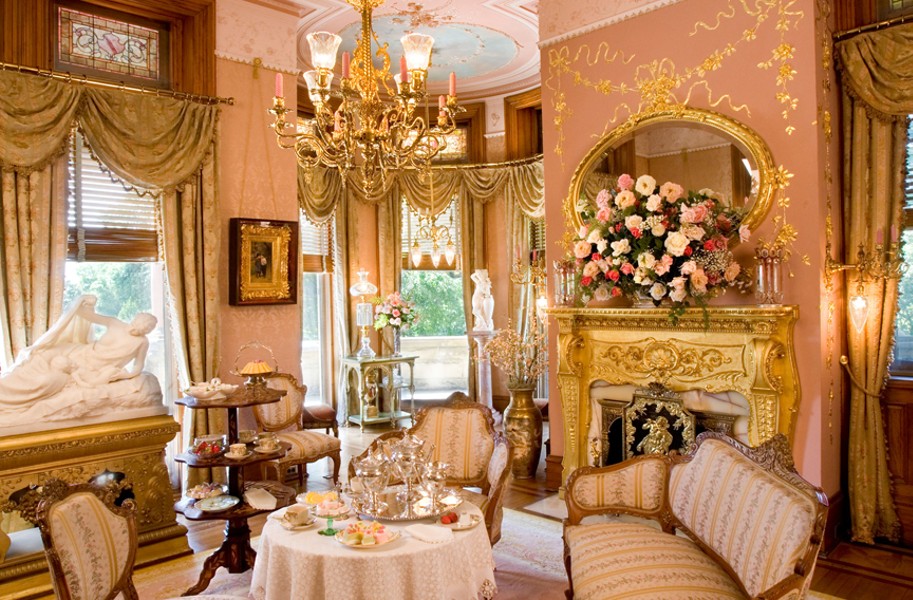 If you want to talk about the one percent in Richmond, a good starting point would be the Dooleys of Maymont.

Those who were well off in the early part of the 20th century not only had the luxury of traveling — the Dooleys "motored through chateaux country" in 1910 and 1912, according to The Richmond Times-Dispatch, but of demonstrating their elevated artistic taste by furnishing their home with French furniture and decorative arts.

"La Belle Époque coincides with the American Gilded Age and the British late Victorian Era," explains Kathy Alcaine, Maymont's senior manager of programs and interpretations. "They decorated their house in the fashion of the time, showing off their knowledge of art and culture."

Every room holds decorative French pieces, albeit of different eras. A pink drawing room where Mrs. Dooley entertained is done in the Louis XV rococo style defined by curvilinear, asymmetrical elements with nods to the natural world, while another drawing room represents the more symmetrical Louis XVI style of neoclassicism with a calliopelike French barrel organ playing in the corner.

Even the Dooleys' cook, Frances Walker, was trained in French cooking and her meals were served on elaborate Haviland china made in Limoges, France. The ceiling-scraping china cabinet was crafted by ebeniste — that's cabinetmaker in French — Jean-Paul Mazaroz and purchased by the Dooleys in New York in the 1870s. Alcaine says there's some uncertainty about which came first, the enormous piece or the alcove in which it stands.

Maj. Dooley was a huge fan of clocks and several of the tour's showstoppers are timepieces. One stands tall in the main hallway, a replica of a Louis XIV clock with cherubs encircling the clock's face and a fiery Apollo beneath it. Upstairs atop a table on the landing rests a table clock depicting "La Toilette de Venus." Designed by a French artist and sold by Tiffany and Co., it's the clock's Cupid who points his arrow at the hour while a small indicator shows the minutes.

Even devoted Maymont fans are unlikely to have seen the stunning tapestry that helped inspire the tour's focus on all things French. Taken off view in 1980, the tapestry underwent extensive conservation in 2016 and now hangs in the upper hall. Made by well-known French tapestry manufacturer Gobelins, "Don Quixote Freed of Folly by Wisdom" depicts Don Quixote, Sancho Panza, Athena as Wisdom, and Folly inside a trompe l'oeil wooden frame surrounded by flowers and silk damask, the flowers' colors especially vivid thanks to the restoration.

No self-respecting women of means would have visited the Continent and not made a stop at the House of Worth, the pre-eminent high fashion destination of the era. It was customary, Alcaine says, to be fitted at the beginning of one's sojourn abroad so that the dresses would be finished by the time Madame was ready to sail home. Although an 1898 Richmond Times-Dispatch account mentioned that Mrs. Dooley wore a Worth gown to a local party, it didn't survive, so the Worth gown on display is of the same era, but a loan from the Liberty Hall Museum in New Jersey. In her nearby dressing room, Mrs. Dooley's elegant Louis Vuitton steamer trunk sits open with two dresses of French lace on top.

From Sevres porcelain to Maj. Dooley's Empire style dressing table and French roll top desk, the Dooleys' appreciation of high French style comes through in every room. And that's a big part of the appeal, according to Alcaine. Unlike museums, where objects are placed in galleries, the Dooleys' riches are seen in the context of the home for which they were purchased.

"Repeat visitors will enjoy seeing the Dooley's collection in a different way," Alcaine says. "And for new visitors, you'll get to see a very typical Gilded Age married couple, their lifestyle and how they showed off their interest in and knowledge of international art."

Sure, "La Belle Époque" proves what we already knew — that the rich aren't like the rest of us. But that only makes it all the more fun to see how the one percent once lived.