The dolls are essential to Barksdale's "Guys,?VbCrLf while silliness is sublime in Richmond Shakespeare's "Compleat Works.?VbCrLf 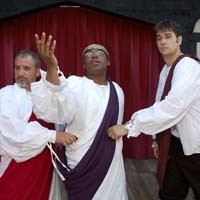 The sexes may share equal billing in the title of the classic musical "Guys and Dolls,?VbCrLf but the show focuses more on the male side of the equation. Nothing makes that clearer than the scintillating, showstopping number, "Sit Down, You're Rockin' the Boat,?VbCrLf that comes near the end of the Barksdale's Broadway-caliber production, playing at the Empire Theatre.

The always-amiable Nicely-Nicely Johnson (Jason Marks in excellent voice) leads a ragtag bunch of shysters, hoodlums and lowlifes in a rollicking song of sin and potential redemption. It's an exuberant, testosterone-fueled high point in a show filled with exceptional ensemble scenes expertly assembled by director and choreographer Patti D'Beck.

But while the guys infuse the show with energy, it's the two leading dolls who fill it with feeling - as well as push the plot. Sarah Brown (Rita Markova), the wholesome leader of a 1940s-era New York City mission, gets drawn into the seedy world of gambling when lying-but-loveable Nathan Detroit (Scott Wichmann) bets high-roller Sky Masterson (Jody Ashworth) that he can't successfully lure her down to Havana with him. Sky tries to work his magic on Sarah, while Nathan frantically searches for a location for his big-money craps game, all the while avoiding his long-suffering fiancee, Adelaide (Rachel Abrams), whose patience is wearing thin after a 14-year engagement.

Adams and Wichmann are a perfect comic pair and their "Sue Me?VbCrLf duet manages to be both heartwarming and highly amusing. Armed with an angelic voice, Markova adds a third dimension to what could be a simple goody-goody character. The somewhat stolid Ashworth is the weakest link of the leading foursome but gains ground when his Sky starts truly falling for Sarah.

The action plays out on a majestic Manhattan street set (designed by Ron Keller) that's impressive even by the Barksdale's usual high standards. With offerings such as last year's "Into the Woods?VbCrLf and 2006's "The Full Monty?VbCrLf - and now this dazzling "Guys and Dolls?VbCrLf - the Barksdale seems determined to make summertime sizzle. The best thing about "The Compleat Works of Wilm Shkspr (Abridged),?VbCrLf the giddily antic production kicking off this summer's Richmond Shakespeare Festival, is that it takes nothing seriously, including its own concept. While the show purports to present all of the Bard's plays in a scant two hours, it condenses all of the comedies into a single skit called "The Love Boat Goes to Verona,?VbCrLf tosses off the histories in a pantomime football game, and skips the tragedy "Coriolanus?VbCrLf entirely (the "anus?VbCrLf part proving too scandalous for one cast member).

But the remaining plays (mostly the tragedies) provide ample grist for comic mayhem, at least in the capable hands of this production's three-man cast. Longtime Richmond favorite Jeffry Clevenger sets the irreverent tone, breezing through the gory "Titus Andronicus?VbCrLf (performed as a cooking show) and infusing "Hamlet?VbCrLf with hilariously overwrought diction.

He bickers with adolescent humor specialist David Janosik, who can't seem to end a play without vomiting. LaSean Pierre Greene is the affable emcee of the evening, though his cohorts' conflicts eventually reduce him to performing yo-yo tricks (quite well!) to fill dead time. You can tell these guys are good because they even manage to pull off an extended crowd-participation bit without completely killing the show's momentum.

Amidst all the silliness, there's actually real knowledge being served up (do you know what Shakespeare's Apocrypha is? I didn't) and some excellent acting on display (Janosik's second-act soliloquy is splendid). Jennifer Dryden's costumes - rife with Converse tennis shoes and silly hats - enhance every scene. "Compleat Works?VbCrLf strips the Bard down to his funny bone, with exceedingly entertaining results. S Barksdale's "Guys and Dolls?VbCrLf is appearing at the Empire Theatre, 114 W. Broad St., through Aug. 17. Call 282-2620 for tickets. "The Compleat Works?VbCrLf will be at Agecroft Hall, 4305 Sulgrave Road, through June 29. Call (866) BARD-TIX for tickets. Corrections: Patti D'Beck and Rachel Abrams' names were misspelled in the original version of this story.