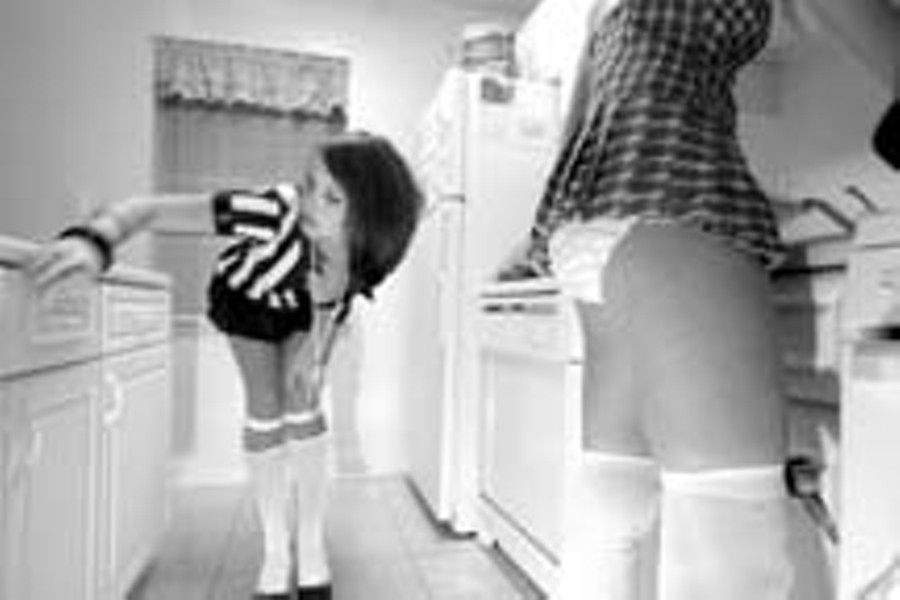 My assignment was to check things out.

The first step was setting up my house-cleaning consultation over the phone. Barrow arrived that night in a grey cotton suit, checked my ID, then instructed me to sit on the sofa and close my eyes. So be it.

A few minutes later, I opened my eyes and found her standing in the middle of my living room wearing nothing but pink two-inch heels, silver hoop earrings, a purple thong with Valentine heart candy, and a tight black fishnet dress. With her burgundy fingernails pointing down at her chest, she bragged, "I'm 100 percent natural."

"I know it's not going to last forever," she says of her looks. "So I wanna capitalize on it." She prods me to stare, rather than making eye contact: "I'm into voyeurism. I like people to look at me."

A Detroit native, Barrow got the idea for her business two years ago after hearing about escort services in Washington, D.C., that rake in $300 an hour, and a similar "cleaning" business in New Zealand. It made perfect sense, she figured: "I like to flirt. I like being around guys. Guys are the least likely to call to get their house cleaned, and guys are dirty."

But don't get any ideas: There's no impropriety, she says — no special favors are offered (aside from massages and spankings). Nor has any of her girls been assaulted by a customer. Clients must sign a waiver and be at least 18 years old and are forbidden to touch the maids. "We're a legitimate business," Clean Coleen says. "Nothing weird goes on."

One long-standing married client in Carytown wanted to wear only underwear during the cleaning. "Just as long as you don't chase the girl around," Dyana warned him. He put on black panties.

A 54-year-old client role-plays a professor/student scenario. He answers the door in a robe, smoking a pipe. The girls dress like school girls, with their cleaning supplies in backpacks, hoping to get an A for doing their "chores." One couple enjoyed having the maid dress up in leather and spank the wife while the husband watched.

But what about the dust?

For my first appointment, the maids got lost and arrived an hour and a half late. "We were like, 'They are going to think we are total dimwits,'" Laura Launder remarked later. Two nights later two "hot maids" arrived for a rescheduled appointment.

Clean Coleen, a 19-year-old fashion design student at Virginia Commonwealth University, arrived with a vacuum in tow and a tray of chemicals. She grew up in Pennsylvania with Amish neighbors and is hiding her profession from her mother in Fairfax. She starts off wearing a red-and-white schoolgirl-style halter top, thigh-high white stockings with plaid bows and clunky, four-inch Mary Jane black leather pumps. Later, before tackling the bathroom, she changes into a frilly black sheer '50s-style bathing suit with hot pink straps and ribbons. She remarks: "You can see my boobs. That's for sure."

Her partner is Laura Launder, an 18-year-old freshman at VCU. Laura, who also works as a waitress, sports a referee theme, complete with the number 69 on her chest. Her mother knows about her work, but she's hiding it from her father.

The cleaning commences. "I have a little naughty side to me," Laura Launder says, reaching up to the ceiling fan with an ostrich feather duster. "Though I'm not that sexually active. I like to be a sex symbol for guys. It's a little strange when the guy's older and sometimes married, to have them ogle you. But when it's a younger attractive guy, it's nice to have him say to you 'Wow, she's sexy and beautiful and has a great body.'" She leans into the washing machine, grabbing some wet clothes and dropping a sock on the floor on its way to the dryer. She puts rose-petal potpourri on the kitchen counter, sneezing with her eyes swelling up. "I'm allergic to that scent," she says.

While Clean Coleen scrubs the sink, Laura Launder scrubs the countertop. "You're butt's in my face," Laura complains to her partner. Coleen shakes it. Laura adds, "My butt is huge, dude. I've got childbearing hips."

Laura pushes a Swiffer Wet Jet across the floor tiles. "I've never used this before," she says, giggling. She scrubs the crevices with a blue toothbrush, and blows her nose in a paper towel.

"I don't want a normal job," says Coleen, stepping into the bathtub wearing her mother's black heels. She bends down, her chest piercing her transparent top. "I'm an art student," she says. "I draw naked people all day. So this is nothing." She scrubs scum off a few shower wall tiles.

"Richmond is stuffy and uptight," Coleen says. "People keep to themselves, work their nine-to-five, come home to their wives and repeat. They should hire us because they need to relax."

Barrow says her parents, with whom she lives in Chester, are proud. When Barrow adds male maids — called "hard-body helpers" — her dad plans to join the squad. S