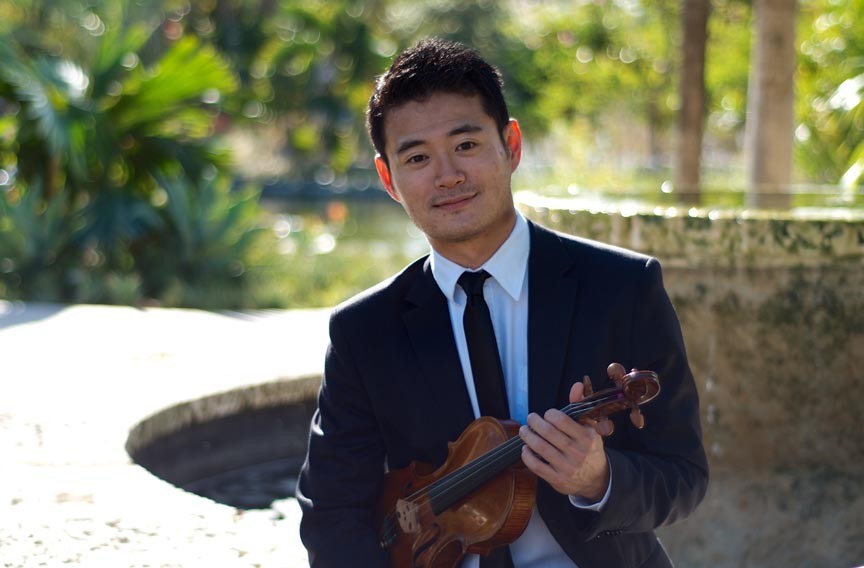 By the time he was in high school, Daisuke Yamamoto had been playing violin for more than 10 years and was getting burned out on classical music. So when he broke his left arm playing soccer, he thought the forced vacation from violin would be the greatest three months of his life.

"It turned out I really missed it after only a week or two," says Yamamoto, who became concertmaster of the Richmond Symphony in January. With his passion rekindled, he went on to study at the Cleveland Institute of Music, one of the top conservatories in the country. There, he won an audition to play in the concertmaster position for a concert that featured Richard Strauss's "Also Sprach Zarathustra."

"I wasn't nervous at all," says Yamamoto, who is sometimes called Dice from the pronunciation of his first name "dice-kay." "It was an exhilarating experience. I guess it never wore off." From that point on, he knew that he would pursue a concertmaster position professionally.

It made sense, after all. As a section player, he "never quite fit in," he says. "I guess I'm a little too opinionated. I like to have a back-and-forth with the music director and other musicians."

The concertmaster of an orchestra, sitting at the head of the violin section, holds a position of musical authority second only to the music director, or conductor. Yamamoto describes the role as a translator, someone who helps the orchestra understand and follow the directions of the conductor.

"He is aware of what is going on around the orchestra and is quick to offer suggestions ... that support the larger performance," Smith says.

Before joining the Richmond Symphony, Yamamoto was a fellow at the New World Symphony, an elite training orchestra in Miami founded by famed conductor Michael Tilson Thomas. Musicians work with guest artists and conductors from across the globe and perform a demanding schedule of concerts.

Still, there was time for things besides music. Tom Schneider, principal bassoonist of the Richmond Symphony, was a New World fellow with Yamamoto, and they both were regulars at pickup soccer games.

"He's a feisty attacker who likes to lean into people," Schneider says. "Dice had the honor of scoring the first header several weeks into the year." Considering that they played with portable goals only about 2 feet high, this was no easy accomplishment.

Even so, both of Yamamoto's arms survived his time on the field, and he eventually went on to audition for the Richmond position, where he demonstrated "a distinctive personality and musical style," Smiths says: He showed that he had "a concept of sound appropriate to each orchestral excerpt and real soloistic flair in the solo excerpts."

Smith and associate conductor Erin Freeman describe Yamamoto with words such as "positive" and "enthusiastic." And he uses these same words to describe himself while answering questions about the contract stalemate at the symphony. Musicians have been playing under an imposed contract since September after they rejected an offer from orchestra management and both sides were unable to reach a compromise.

"I feel I have positive energy," Yamamoto says, discussing the situation in the very broadest of terms, as a new orchestra member. He leans forward to make a point: "I'm sure we'll pull through, because both sides want the same things — to give great concerts and give back to the Richmond community."

Yamamoto replaces a concertmaster who left after only a year with the Richmond Symphony. As he lists music he's looking forward to playing with the symphony next year — Verdi's "Requiem" and Schumann's Symphony No. 2, for example — it certainly sounds like he plans to stay longer than that. S

Daisuke Yamamoto performs at the Symphony Rush Hour concert Thursday, May 2, at 6:30 p.m. in the 200-seat Gottwald Playhouse at Richmond CenterStage. richmondsymphony.com. $12-$20.