Irving “Peanut” Ward danced and sang to mark the best times or just because he felt especially joyful on any given day. It’s a trait that widely endeared him to others in Richmond’s homeless community — a population that sees more adversity than luck.

Those who knew him were shaken to learn of his death early last month. Ward’s body was found Jan. 3 just before 8 a.m. outside of the Daily Planet, a center on Grace Street that provides health services for the homeless. He had frozen to death.

About two weeks later, his friends and others gathered to honor the man they called Peanut during a vigil in Monroe Park.

Katrina Lewis, who grew up with the 40-year-old in Gilpin Court, spoke of Ward as a jokester who often stopped to join his friends in prayer.

“Peanut is love, baby. Peanut is nothing but love” Lewis said. “If you didn’t like Peanut, there was something wrong with you.”

Ward often could be found in Monroe Park with a smile and encouraging word. He enjoyed snacking on cookies he constantly hoarded in his pockets. And he was well known and respected by much of the city’s tightly knit homeless community, says Jess Izen, a member of the advocacy group ASWAN, or A Society Without a Name. 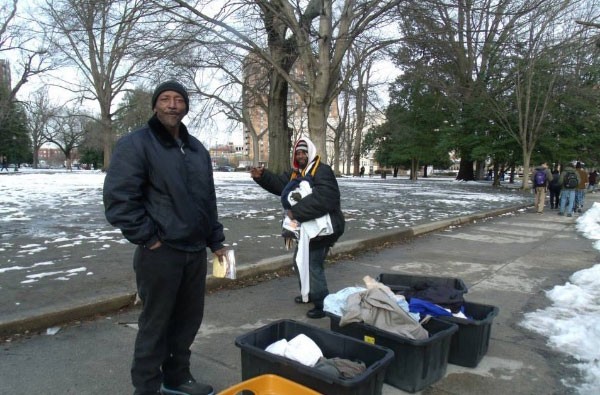 Ward was buried at Oakwood Cemetery. Shortly after his funeral Friday morning, his aunt, Shirley Green, said that much of the reason for his childhood nickname, Peanut, was because he had the lighthearted nature of Snoopy.

But as he was celebrated for his carefree spirit, his death came to symbolize a dark frustration of the homeless community. Friends questioned why he was found outside in the elements, only a mile away from the city’s cold weather overflow shelter on North Ninth Street.

When the temperature dips to 40 degrees, the authorities work with churches and other nonprofits to provide shelter throughout the city. The overflow shelter houses those who are left after other facilities are at capacity. People who use it must be screened by Commonwealth Catholic Charities at 511 W. Grace St.

Li Stiles, who’s had to stay there, is one of many friends speculating that Ward chose not to enter the overflow shelter because of substandard conditions.

Those who spend the night are given thin mats, until they run out, with aluminum sheet blankets for warmth. He says the bathrooms provide no place to shower and that it’s cramped and overcrowded. The lights are left on through the night and many people sleep sitting in hard, wooden chairs.

“I would say improvements [are needed] in reference to humanitarianism,” Stiles says.

At the vigil, W.B. Scout Leader Bat took to the microphone to call the shelter “a man-made purgatory.”

Or maybe Ward was refused entry, as some of his friends believe. The Social Services Department says there’s no record that indicates someone may have been denied access.

City Councilman Parker Agelasto met with social service officials last week to discuss potential improvements to the shelter and the possibility of its relocation.

Lockers could be added if the shelter remains in the former public safety building, he said. But they didn’t support requests to dim lights or disarm security officers, citing safety concerns.

Agelasto also writes that he asked the city’s Risk Management department to study other emergency shelters and determine why the overflow shelter is different.

Lewis says her friend’s death has brought more attention to the shelter’s plight and says the city should take action.

“Look at Peanut now,” she says. “You didn’t make sure he had a secure home. And Peanut wasn’t the only person who died.” S

Editor's note: A print version of this story incorrectly referred to Li Stiles with the pronoun "she". We apologize for the error.