Witness the revival of charcuterie. 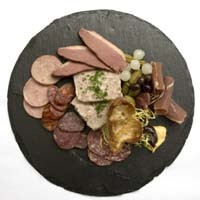 Charcuterie has its roots in the ancient world as a way to preserve meat before refrigeration. Today we honor this tradition partly as a way to uphold our culinary legacy, but mostly for reasons of taste. Charcuterie in its many forms — prosciutto, bacon, pA›tAc, terrines, confit and sausage, to name a few — is a real treat and increasingly, one that can be found on Richmond menus.

On my first attempt to reach Richmond's resident charcuterie expert, Chris Mattera, I am told that he is on a special assignment in West Virginia. He was helping butcher some Ossabaw hogs, kin to the pigs the Spanish brought to the New World starting in the 15th century.

When I catch up with him at Belmont Butchery in the Museum District, Mattera's eyes sparkle with enthusiasm as he tells me about growing up in New Jersey with a huge Italian population that brought its charcuterie traditions to the United States. After an apprenticeship with an Italian butcher shop in San Miniato, Mattera brought back special skills that are in demand as charcuterie gains in popularity.

In Richmond, Mattera makes a variety of sausages, cured meats, pA›tAcs and terrines. He also serves as a de facto mentor to many chefs who have embraced the nose-to-tail philosophy of using all cuts of meat, adding charcuterie to their repertoire. Mattera acknowledges tradition as an important part of his philosophy, but as “the foundation on which to build, not the roof under which to hide,” he says.

Tanya Cauthen, owner of Belmont Butchery, encourages Mattera and others on staff to experiment and respond to customer requests; recent orders include a Cajun boudin and a South African style boerewors, crafted with all-natural pork and beef shoulder seasoned with coriander, clove and nutmeg.

Neighbor One North Belmont features many of Belmont Butchery's products and respectfully cites their origin, and they also make their own pA›tAcs and terrines. Can Can Brasserie has a flavorful salumi plate with fresh and cured sausages and ham on the shared appetizer menu.

Other places where I have recently found charcuterie in Richmond include:

Bouchon, a new French bistro in Shockoe Slip, offers traditional charcuterie as an appetizer. It is beautifully presented on a slate platter and generous in its portion and variety: a selection of dried sausages (chorizo and saucisson sec) combined with a softer French garlic sausage with liver undertones; a tender smoked duck breast; a duck prosciutto with a nice flavor but cut a bit thick; Bayonne ham, an air-dried salted ham from the Basque region of France; and dried figs, apricots and cranberries with cornichon and onion pickles. Bouchon makes the duck prosciutto in house, but the rest is currently sourced from D'Artagnan, a New Jersey company founded by the daughter of a top French chef. It delivers goods to fine restaurants and home cooks.

Six Burner, a mainstay in the Fan for the past five years, has a new chef, Philip Denny, who has ambitious plans for homemade charcuterie. On a recent visit, the restaurant was out of the homemade duck ham so I am relegated to their sourced fare.

The prosciutto is outstanding and sliced perfectly; the mortadella and salami are good, but don't stand out. What makes the plate special are the homemade pickles; six quarter-sized slices of cucumber pack a spicy vinegar punch and a small stack of pickled onions nicely accents the salt of the meats. A Jamison Farms rabbit and foie gras terrine is decadent but a bit bland on its own, but its taste is nicely enhanced with a dandelion and frisee salad. I look forward to a return visit when Denny has his charcuterie in full swing.

Balliceaux, one of Richmond's newest hot spots, features a duck confit crepe with jicama slaw and sour orange sauce. A traditional confit involves salt curing and then slow poaching in rendered fat. This usually results in a moist, tender and flavorful meat. While Balliceaux's crepe is enhanced by the slaw and the slightly-sweet, not-too-sour sauce, the confit on its own is a bit bland and dry.

Charcuterie may well be a hot trend for the year to come as the slow food movement gains momentum and chefs experiment with traditional cooking methods and local ingredients. That can only mean good things are coming for those who wait.  S