The Cult of Pen

Richmond’s most influential guitarist, Pen Rollings, is back making music. 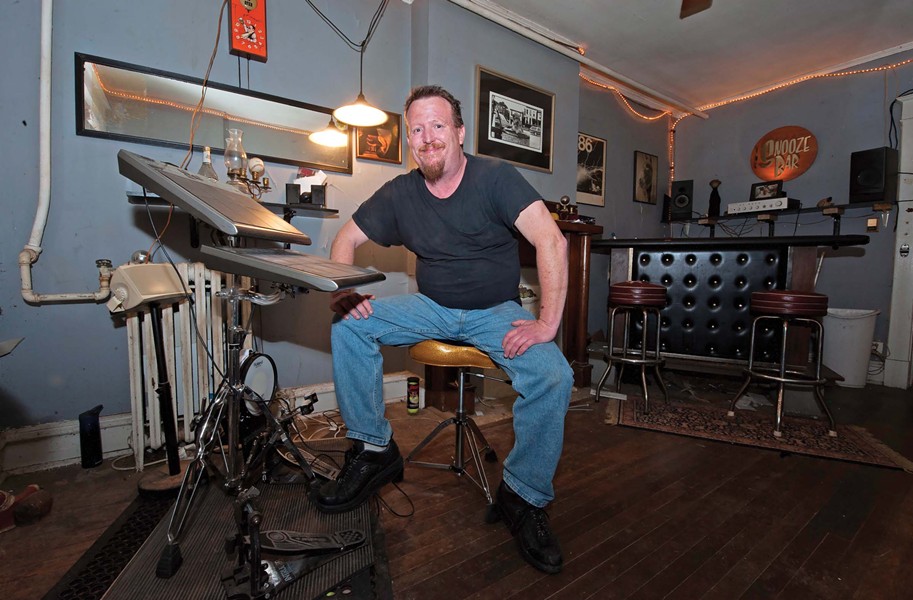 You may think you know a song, but you really haven't heard it unless you've listened to it with Pen Rollings. "All right, here it comes … listen to this," he says, air playing to whatever part he wants you to pay attention. Listening to music with Rollings can be exhausting at times, but it is worth it to hear music the way he hears it. He always knows what makes a song great.

Talking to him, you'd never know that the manically polite 48-year-old is arguably the most influential guitarist this city has ever produced. The last time he played guitar onstage was more than two decades ago, but with his founding role in Loincloth's 2012 release, "Balls of Steel," and the upcoming Merge Records reissue of Breadwinner's back catalog, the cult of Pen continues to grow.

Bands as diverse as Metallica, Fugazi, Yo La Tengo, Superchunk and countless others have cited him as an influence on their music. When I tell him I'm going to call the article the cult of Pen, he hates it. "That's stupid. Don't call it that. I'm part of a bigger picture than just me," he says. "You should call it the cult of Richmond."

Rollings is a physical player. For all his obtuse riffage, there is a distinct Angus Young-like quality to his playing in that he doesn't merely play the guitar, he makes it an extension of himself. His tightly coiled melodies were central to Honor Role's sneering post punk. After the breakup of that legendary band, his playing was liberated from the confines of working with a singer in a succession of instrumental groups. "It was nice to start over and lose all of my history," he recalls. "It was a new kitchen to work in."

With the band Butterglove, his style became more monolithic and metallic to suit the band's infatuation with the gooey crawls of the Melvins ("That Melvins show at New Horizons with RKL for their first single blew everybody's mind. It changed the fabric of Richmond music," he says.) His next band, the three-piece Breadwinner, with drummer Chris Farmer and bassist Bobby Donne, solidified the group's reputation as math rock pioneers. Stripped to its barest essentials, Breadwinner's take on metal was devoid of gratuitous excess. Songs were aggressively short and to-the-point, despite their obsessive orchestration.

After years of playing to almost total indifference, Breadwinner, having toured with Jesus Lizard and recorded its second single with Steve Albini, was poised for bigger things when the inspiration ran out. After the last gig in 1992, Rollings sold his guitar and rig to rabid fan John Reis of Rocket from the Crypt. Other than a brief tenure as the drummer for the band Ladyfinger, he stopped playing music.

"I just lost interest," he says of his nearly 10-year layoff from making music. "Like eating, I only make music when I'm hungry. It's not that I was bitter or anything, I just wasn't inspired anymore."

In 2000, he found his inspiration again and formed Loincloth, the underground metal super-group with Richmond guitarist Tannon Penland, North Carolinian bassist Cary Rowells and drummer extraordinaire Steve Shelton from the group Confessor. The experience proved too trying for Rollings to travel between Richmond and Raleigh, N.C., and he left the band soon after its exceptional 2003 debut EP, "Church Burnings," was released to great acclaim on Southern Lord Records.

Today he's enthused about music again and playing drums in the metal duo Bowl Ethereal. In guitarist Brian Metz, Rollings has found a player who can interpret his unique stylistic visions and more importantly, add to them.

"Listen to this," he says, cuing up the group's latest linear metal workout, "Metz is killing it." After listening to it with Rollings alternating between air drums and guitar, I agree: Their self-released debut, "5 Minutes," consisting of five one-minute songs, is one the best things he's ever done.

Rollings only makes music that he wants to make and whatever he does is done with an infectious enthusiasm that's impossible to resist.

The cult of Pen continues.