The Creek Runneth Over

Andrew Blossom's literary magazine fills its pages with compelling content from near and far. 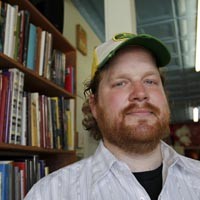 If Makeout Creek creator and editor Andrew Blossom had a tagline, it would no doubt be borrowed from “The Simpsons” character Milhouse, who's hit by a car while Bart becomes a revival preacher. “Bury me ... at Makeout Creek!” he says, gasping.

It's a phrase that Blossom nursed straight through 9/11 while living in New York. “[We] dealt with the aftermath through the selected use of resigned humor,” he says. “We selected last words for ourselves in the case of future catastrophes, taking them from ‘Simpsons’ reruns.” He even emblazoned a sweatshirt with “Makeout Creek.” But he didn't stop at textiles. He went to print.

While the Makeout Creek literary magazine's title was born of a pop-culture reference, the varied textures and rhythms within its pages are primal, unsettling and delightful, taking genre risks without devolving into absurd word salad. The visual and verbal gallery of photographs, illustrations, short stories, poems, screenplay excerpts, ironic reviews and found epistles — even the bios — are compelling, with links that may or may not lead deeper down the rabbit hole (see “Eagy Hasberry: Click HERE.”)

Blossom has had his fingers in enough literary pies around Richmond to suss out and mine the distinct flavors of each. Issue three, for example, uses cover art by fellow Chop Suey employee and renowned painter Ryan McLennan and found epistles from Chop Suey owner Ward Tefft.

But Blossom's also sidestepped the risk of running provincial, receiving submissions from as far away as Great Britain and China. “The amount of international writers testifies to the tenacity of writers,” Blossom says — “that somebody from Italy would look around until they found us.”

Blossom earned his master's degree in fiction writing from Virginia Commonwealth University in 2007 and an undergrad degree in African-American studies from the University of Virginia. He works part-time at Chop Suey Books and Video Fan, teaches fiction workshops at the Visual Arts Center and is one of three editors of Richmond Noir, a collection of short stories set to come out next spring. Although Makeout Creek doesn't have a Richmond focus, Blossom says he was confident in starting the new journal, knowing the caliber of artists and authors around town.

“The issues have gone from clunky to slightly less clunky to even less clunky,” says Blossom, who predicts that issue four will be released in October. (“Which may be November,” he says. “We are still in need of submissions.”)

As Blossom's savings earmarked “litmag” run down, he hopes to find a way to make the journal financially self-sustaining. While Makeout Creek has an Internet presence via Web site and blog, the substantive weight of its 48 8A«-by-11-inch pages casts a strong vote in favor of the teetering and precious world of print. S