The Courtship of Carmina

In 1959, a John Butler premiere caused near fistfights in the lobby. Here's how Richmond Ballet became the guardian of a most scandalous dance. 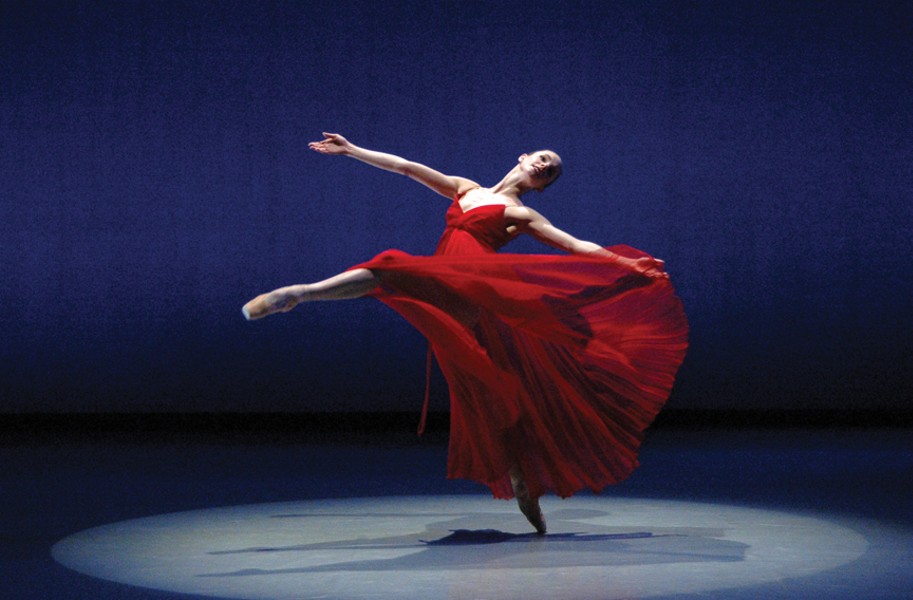 Suzanne Grandis Anne Sidney Hetherington dances in John Butler’s scandalous “Carmina Burana,” which will be performed by the Richmond Ballet, Richmond Symphony and Richmond Symphony Chorus at the Carpenter Theatre this weekend.

He's in the studio with the professional company and the Ballet II dancers. Maestro Ron Matson is also there, playing piano for the rehearsal. He'll lead the full Richmond Symphony Orchestra and Chorus through Carl Orff's passionate score for the legendary "Carmina Burana" — a large work requiring 16 dancers. The section they're rehearsing is based on songs of debauchery written by monks.

"What, you don't like him?" Burn folds his arms and stares at her. "Oh, you do? Good, that's a bonus." He runs them through it until he's satisfied.

Next up are four seasoned company dancers. They lock eyes fearlessly, veterans of the intimacy this ballet requires. Burns lets them dance, pleased. Rehearsal ends with Burn clarifying that hoods on monk robes are to remain down for the performances.

But before he takes the robe off, one dancer puts the hood up. A long, white arm snakes out with a grim reaperlike, pointing finger. It's an appropriate nod to Halloween but one that has even more poignancy considering the history between the original choreographer, John Butler, and the ballet's artistic director, Stoner Winslett — one that speaks almost from the grave.

When it premiered in 1959, Butler's "Carmina Burana" caused heated debates and near fistfights in the lobby. The ballet is based on a 13th-century manuscript of racy songs written by monks. Themes include various worldly pleasures, and costumes for the ballet range from monks' robes to scanty dance belts with fig leaves. But perhaps most disturbing to some was Butler's choreography — a groundbreaking fusion of modern dance and classical ballet. "Some people thought it was the greatest thing they've ever seen," Winslett says, "and some people thought it was trash."

Considered the first to bridge these separate disciplines, Butler's unique, emotionally charged choreography led him to work with Mikhail Baryshnikov and other renowned dancers. He also collaborated with artists including Andy Warhol and the writer Ezra Pound.

In the late 1980s, Winslett approached Butler about performing his work.

"We met in some New York coffee shop," Winslett recalls. "[Richmond Ballet] didn't have a whole lot of money — we were a newish professional company. But I was in luck, because he was from Greenwood, Mississippi, and I grew up in Columbia, South Carolina. I think he thought it was amazing that I was so young, doing what I was doing. And he thought it was amazing I was from the Southeast, because there aren't too many Southerners in the ballet world. Then there was the fact that I was female on top of it all, because there aren't many female artistic directors."

Whatever his reasons, Butler agreed to come to Richmond Ballet and stage "Carmina Burana." During his time in Richmond, Butler and Winslett became friends.

Shortly before Butler's death in 1993, Winslett went to New York to visit him. "I remember going to his apartment and he said, 'Come sit here.' He was lying in bed," Winslett says. "He said: 'You are one of the few I really trust. When I'm not here, will you help keep my work alive?'"

Winslett promised she would. She's now the president of the John Butler Foundation.

"If I'm a painter, I have all my masterpieces and if I die and leave them to you, you come with a truck and pick them up — pretty easy," Winslett says. "If I'm a choreographer and I'm leaving ballets to people, what is that, really? It's a bunch of videotapes, some musical scores, some notes. If you come with your truck and pick it up, that doesn't mean you can reproduce it."

Eventually, Winslett was able to piece "Carmina Burana" back together by bringing the three original cast members who were still alive to Richmond. Everyone shared memories of what Butler originally wanted, she says: "We kind of got a codified version and agreed on costume designs and lighting design."

Richmond Ballet will dance the scandalous "Carmina Burana" at the Carpenter Theatre this weekend. Also on the program are two works chosen to highlight the 40th anniversary of the School of Richmond Ballet. One is Winslett's own, "Danse Macabre."

"I choreographed it in 1981," says Winslett, who was 21 at the time, "around a very talented student named Philip Neal. He went on to be a principal dancer at New York City Ballet for 23 years. Now we have another promising young lad doing the role, with his little baton." Next on the program is Balanchine's "Mozartiana," featuring company ballerinas who graduated from the school and tiny aspiring ballerinas who are current students. After an intermission, "Carmina Burana" will take the stage.

"Then we will see what having a school here can make for us," Winslett adds. "For 'Carmina,' you have to have artists who are mature technically, emotionally and spiritually." S

"Carmina Burana," "Danse Macabre," "Mozartiana" and the Richmond Symphony and Richmond Symphony Chorus are at the Carpenter Theatre from Oct. 31-Nov. 2. Tickets are available at eTix.com or by calling 800-514-3849.