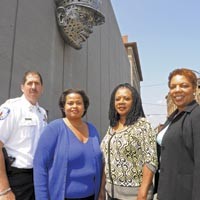 Imagine: The telephone rings and wakes you from a hard sleep. The numbers on the alarm clock read 2:30 a.m., and someone on the other end of the line says: “If you have caller ID, then you know whose phone this is. You'd better get here quick.”

A year and a half ago, JoAnn Cockey answered that phone call. It came from her son Luke's cell phone, but the voice was a stranger's. The caller was watching the 23-year-old being loaded into an ambulance near the intersection of Rowland and Main streets.

Only someone who's suffered through it really knows what it's like to lose a loved one to violence. No one understands that better than Richmond police Maj. John Venuti, former head of the homicide unit. “I can say I'm sorry from the bottom of my heart,” Venuti says, “but victims know I haven't walked in their shoes.”

Since his promotion to major in charge of support services, Venuti has spent less time tracking killers. But he still concerns himself with homicides and the lives they touch. So around the time of Luke's death — in an unusual case, he died from a single blow to the head during a fight outside a bar in the Fan on Jan. 24, 2008 — Venuti formed the Homicide Support Group to connect families of homicide victims.

“Right after a murder,” Venuti says, “all they want is resolution in the form of arrest and conviction. But afterwards, they say ‘What now?’ So many just need support.”

The support group meets the first Wednesday of every month. It includes a broad spectrum of people whose lives are unlikely to cross outside of a second-floor conference room at police headquarters. But they all have one thing in common: Each has lost a loved one to murder.

Usually about 15 people attend the discussion group, led by Edna Deane Phipps, a social worker for Richmond Behavioral Health Authority, and assisted by Ester Marshall, a victim-witness assistant with the Richmond Commonwealth's Attorney's office. “I see a lot of improvement in the ones who come faithfully,” Marshall says. “They are finding ways of trying to revise the anger.”

Establishing the Homicide Support Group also has had a positive impact on the homicide detectives, Venuti says. The stress that comes with working the cases and following up with victims' families can lead to what's known as compassion fatigue. Emotional involvement in the cases also can interfere with the job. “It was wearing out my cops,” Venuti says.

Carolyn Cooper believes the interaction has helped her move forward. Her son Leonard was killed after a fight on Third Avenue in 1998. Struggling with grief for more than 10 years, Cooper says she's come a long way since joining the group. “I'm coping a lot better,” she says.