The Color of No 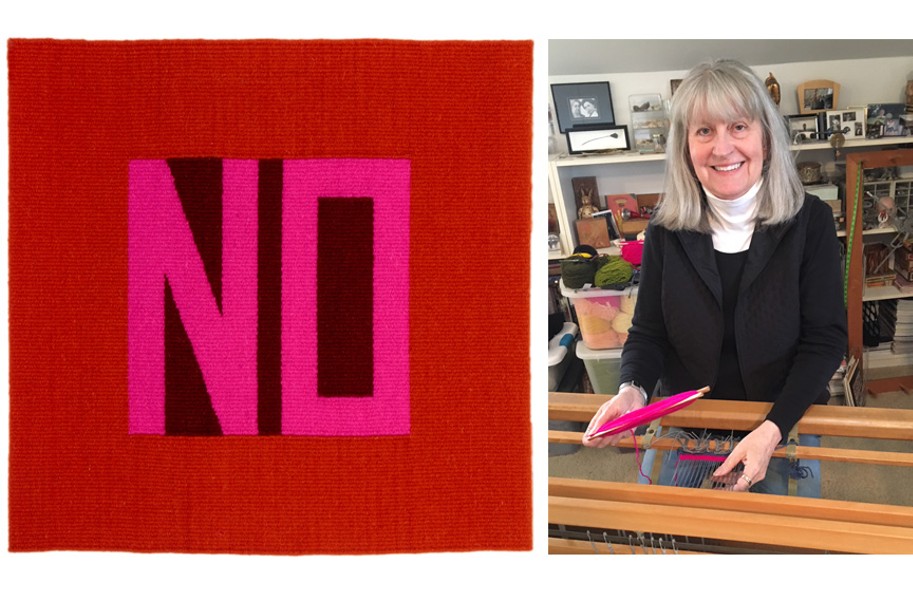 It was the late '60s and Susan Iverson, like so many flower children of that era, had every intention of becoming a painter.

But fate intervened when she happened to walk by the weaving room at Colorado State University and felt curiously drawn to it. In need of a couple of electives, the 19-year-old opted to take a weaving class and quickly fell in love with building something rather than spreading paint. To her, it felt revolutionary to be weaving tapestries in the 1970s.

"I loved the object quality of it versus the illusive quality of painting, because it has an architectural element to it," she says, recalling that her teachers stressed understanding the basics of weaving. That meant dyeing her own yarn — wool, linen, cotton, silk and mohair — and she soon fell in love with being able to control exactly the colors she wanted to work with. "I liked dyeing as much as weaving. The only downside was that you had to plan ahead so you'd have the color you wanted once you started weaving."

After two years concentrating on weaving, Iverson was hired by Virginia Commonwealth University to teach in the craft and material studies department in 1975, a job she held for 40 years until retiring in 2015, although she returns there periodically to dye yarn.

Her new exhibit at the Visual Arts Center, "The Color of No" began as an occasional project in 2014. She'd been thinking off and on for several years about making tapestries incorporating the word "no." Her goal was to integrate text and color, but deciding what word to use was challenging. She decided on "no" because rather than conjuring up an image, it was simply the word that came to mind. So to her, it had the most potency.

With the other part of her focus on color, Iverson's process involved dyeing a stockpile of yarn in a wide array of colors before beginning to weave. The final choice involved which font she would use for her "no" because she felt that some colors didn't work with certain fonts. One thing she feels strongly about is that almost all art is political on some level, an opinion evident in one tapestry where a fat, red "no" sits on a dark blue background, a sharp reminder of today's political partisanship.

And because she didn't have time to be making large-format tapestries, it made sense to keep the "no" pieces small, but not tiny, so the word still would have impact.

The change in scale was significant, since all her prior work had been designed to carry a wall alone. With diligent work and a desire to keep the size fairly small, Iverson can complete a "no" tapestry in about a week. "It was a new challenge for me," she says. "Can I do this, pick colors that I want to work with and keep the scale small?"

It's not lost on Iverson that the word "no" has taken on new meanings since the Me Too movement was ignited. She uses pink in multiple pieces, but it's a hot pink, rather than a soft, feminine pink, that conveys energy and power in the female voice. Each work has a different pitch in terms of age and gender and she hopes each informs the viewer's sense of who the voice behind the "no" is.

Sometimes she can't figure it out until she sees it on the wall, as was the case with a yellow "no" that is crowded up against the edge of a black border. "When I saw it up, I knew right away it was an adolescent voice."

The series of work in the exhibition includes 40 smaller pieces along with two large multi-panel pieces, a symphony of "nos" deliberately hung lower than traditional gallery shows. "It has to do with the female body height," Iverson explains. "I always think about how people approach the work."

Although she's officially retired from the university, she still spends nearly every day in her home studio, insisting that artists don't retire. As long as her desire to create continues unabated, she expects to do so.

Since most of her past exhibitions have been elsewhere, Iverson admits that she's extremely happy to be sharing this work with Richmond.

"I always care about the work first and then the audience," she says. "I don't care if they like it, but I want them to experience it themselves and hopefully take some small thing away."