The Color of Belonging

"We are always going to be the odd duck in any group. Dig deep enough and we will find something that makes us stand out, but standing out doesn’t mean we are alone." 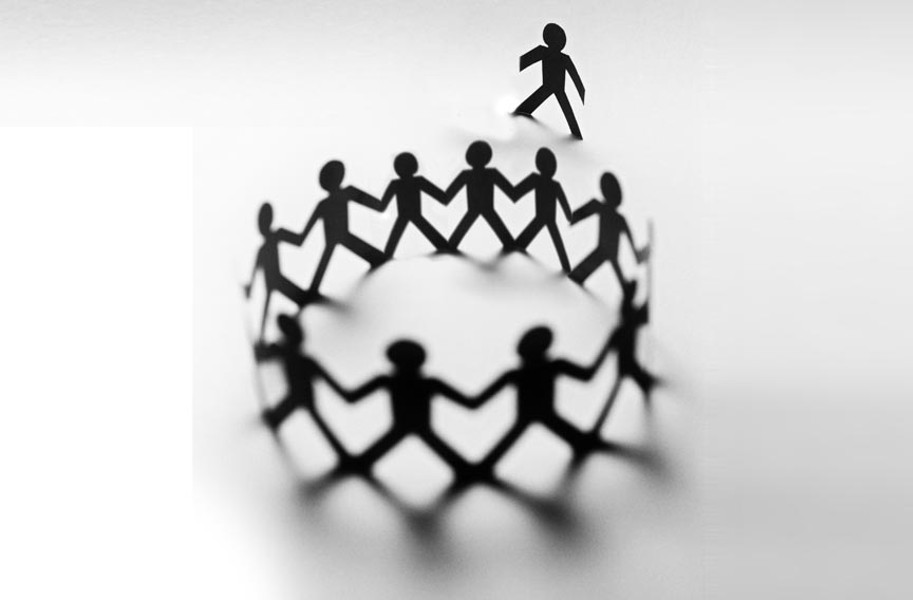 In the nearly relentless action that is “Mad Max: Fury Road,” there’s a brief pause when a pernicious character named the Bullet Farmer laments that all the melee essentially is a family squabble. It’s a hint at the core of the movie. The cars, the special effects, the beautiful and frightening two hours which cost millions of dollars and was almost a decade in the making — it’s just a story about families not getting along.

Where would the entertainment world be if families could get along? If lovers stayed in love? If people felt connected and valued, and that their lives were being lived according to a sense of lasting meaning? Back to day- in and day-out slapstick and car chases, cooking shows and trivia contests — that’s where. Without family drama and emotional isolation, Hollywood has no bank. Perhaps that’s because the two most damaging misconceptions of self prevalent today are: I am like a group of others, and I am completely alone.

Based in a two-dimensional understanding of who we are in time and what it means to be human, these misperceptions tie us to limited thinking, diminishing the possibilities both for who we can become and for the kinds of meaningful relationships we can build. In simple, noncounseling terms: Most of us don’t know who we are and we spend a lifetime griping at others for it. Either our parents did it, or our siblings did it, or no one understood our family in the first place, we say, when none of that ultimately helps us become who we need to be in the end.

While these issues seem like the fodder for the self-help aisle, they play out in destructive and violent ways, not unlike “Mad Max’s” 120 minutes of pyrotechnics and devastation, or in more subtle ways dramatically revealed like the secret life of Rachel Dolezal, a white woman whose private journey seeking to belong with a group led to years of pretending to be a black woman.

At some crucial point in her life, Dolezal made a choice leading her from I am alone to I am like a group of others that is difficult for most of us to fathom. I know that my fellow Richmond Public Schools alumni and I spent far too many hours after the story broke trying to work out what combination of bronzer, hair weaves, and daily madness kept Dolezal focused on her deception.

“But we would have accepted her as she was,” one of my friends bemoaned.

And I know this to be true. My children have been part of the Richmond Parks and Recreation sports teams for years, often the only white kids not only on their teams, but also on the field.

One fall afternoon my son pointed to a migrating arrow squawking south above our heads — eight dark Canada geese and one bright white one bringing up the rear.

“Look, Mama, it’s my basketball team,” he said, smiling. We may not look like the other families, but the coaches, players, and parents have made it so we are a comfortable part of the flock.

A fallacy of belonging is that when you look alike you’re meant to be together. Anyone failing at a civil family holiday knows that the flock rarely clucks in time with one another. If anything is clear from the strange Dolezal news cycle — which ended abruptly with the shooting in Charleston, South Carolina — it’s that her family doesn’t get along. A nuclear family gone nuclear winter.

But did she feel any less alone when she began her double life? Always knowing that she was different, knowing that she had a secret and that the ease of togetherness she was seeking could be undermined at any time? Was there ever a moment when Dolezal truly felt part of the family? Any family? In a desperate attempt to belong, she completely isolated herself.

I have nothing but sympathy for Dolezal. I don’t understand her at all. I can’t imagine choosing a single step in her path, but every day my work with people at the end of life has them trying to resolve the very questions with which she so artlessly struggles.

Much of how we define ourselves becomes irrelevant at the end of life: Jobs, physical appearance, cleverness and bank accounts mean very little when you become fully dependent on others for your care. Who are we when we are dying?

The moment of truth for most of us is when a stranger, sometimes of a different gender, often of a different culture, comes to strip our soiled clothes off and bathe us. Every group you think you are a part of becomes unimportant when you are at that crux of trust with a person who controls the water temperature, privacy and every sense of your comfort. For some people the fear of that moment is when they feel most alone. For others it’s a time when they put their arms around another and redefine family.

We are always going to be the odd duck in any group. Dig deep enough and we will find something that makes us stand out, but standing out doesn’t mean we are alone. Each of us is a charming combination of wonderfully unique and nauseatingly uniform. There is a place for all of us as we are, but that requires going past the accessories, past the luxuries of good health, past the indignities of family life and knowing who we are, what we long for most in life and what we fear.

Fear is the kicker. There aren’t enough wigs and makeup in the world to hide any of us from what we fear. But we never know who we are until we know what we are afraid of, even if it is ourselves. S