Mo Karn and the Wingnuts stir up dust for the “ideal society.” 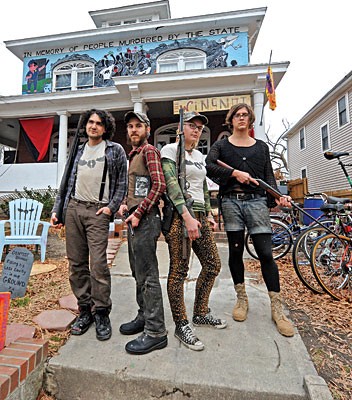 The young men and women of Richmond's most written-about anarchist collective want you to know they don't mean any harm. It's just the opposite, actually. They say they're here to help.

Hence, after obtaining training documents from the Richmond police via a Freedom of Information Act request, the Wingnut collective posts them on the Internet. Activists of this generation — anarchist and otherwise — are well versed in digital organizing.

When City Council members attempt to justify closing Monroe Park because of “unsanitary and unsafe” conditions, they provide evidence that shows just the opposite.

The point isn't to reform government, Wingnut resident Jeremy Hawthorne says. Being an anarchist means rejecting any and all hierarchical institutions. Instead, the Wingnuts say their goal is to educate themselves on what public officials are and are not allowed to do, and hold them accountable when they step out of line.

The collective was started in 2007, brought together by what one member calls “anarchy magic” and a shared philosophy of what an ideal society should look like.

Most recently, Mo Karn and four other twenty-somethings live and share resources at a two-story South Barton Heights house, which serves as the Wingnut base of operations. Karn was sued in January by the city and Richmond Police Chief Bryan Norwood, seeking the return of the police manuals, charging that the department released them accidentally. Karn, of course, refused to return the documents. The city withdrew the complaint days later, citing a desire not to further waste city resources.

The anarchists say that the publicity over the incident, mostly positive, will only help them as they continue to illuminate Richmond's problems. “It's not a hard thing to do,” Karn says, chuckling.